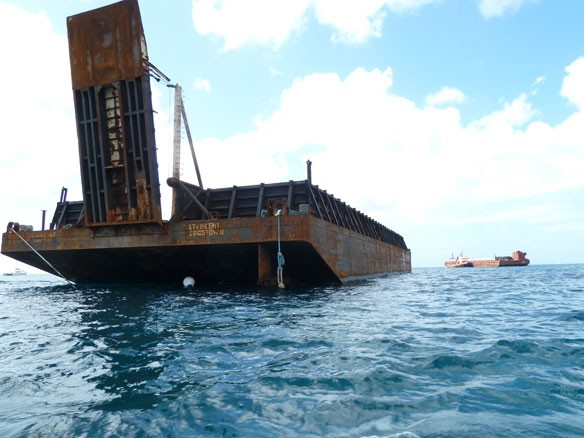 The 2016 Water Resources Development Act, signed by US President Barack Obama last month, approved studies to be carried out to determine the feasibility of transporting sand from other countries and territories around the world to coastal cities in America that have been affected by erosion in recent years.

The Bahamas was named among the potential sources for sand.

“We are basically at sea-level. If we venture down this road, 80 per cent of our islands will be under water by the end of the century…”

Bahamian sand considered for replenishing eroded Florida beaches; The Nassau Guardian (01-03-2017)
The US is looking at Bahamian sand as a resource to shore-up Florida’s eroding coastline, an Associated Press (AP) story revealed. The story explained that the Water Resources Development Act recently authorized the Army Corps of Engineers “to study the potential of using foreign sand, such as from The Bahamas, to widen shorelines and protect coasts from hurricanes”.

U.S. has OK to study bringing Bahamas sand to Florida beaches; (01-03-2017)
The 2016 Water Resources Development Act authorizes the Army Corps of Engineers to study the potential of using foreign sand, such as from the Bahamas, to widen shorelines and protect coasts from hurricanes.
“The Secretary (of the Army) is authorized to undertake a study of the economic and noneconomic costs, benefits and impacts of acquiring by purchase, exchange or otherwise sediment from domestic and nondomestic sources for shoreline protection,” the provision states. “Upon completion of the study, the Secretary shall report to Congress on the availability, benefits and impacts of using domestic and nondomestic sources of sediment for shoreline protection,” it reads…

No downside to Bahamas developing sand exports; The Nassau Guardian (08-30-2013)