North Atlantic right whales are one of the world’s most critically endangered large whales.

For a few decades, the math for North Atlantic right whales seemed to be working out, and the whales appeared to be experiencing a tentative recovery. But beginning in 2010, the tiny gains in their numbers began eroding… The age-old mystery of why otherwise healthy dolphins, whales and porpoises get stranded along coasts worldwide deepens: After a collaboration between NASA scientists and marine biologists, new research suggests space weather is not the primary cause of animal beachings — but the research continues. The collaboration is now seeking others to join their search for the factors that send ocean mammals off course, in the hopes of perhaps one day predicting strandings before they happen.

Scientists have long sought the answer to why these animals beach, and one recent collaboration hoped to find a clear-cut solution: Researchers from a cross-section of fields pooled massive data sets to see if disturbances to the magnetic field around Earth could be what confuses these sea creatures, known as cetaceans. Cetaceans are thought to use Earth’s magnetic field to navigate. Since intense solar storms can disturb the magnetic field, the scientists wanted to determine whether they could, by extension, actually interfere with animals’ internal compasses and lead them astray.

During their first investigation, the scientists — from NASA’s Goddard Space Flight Center in Greenbelt, Maryland; the International Fund for Animal Welfare, or IFAW; and the Bureau of Ocean Energy Management, or BOEM — were not able to hammer down a causal connection.

“We’ve learned so far there is no smoking gun indicating space weather is the primary driver,” said Goddard space weather scientist Antti Pulkkinen. “But there is a sense that geomagnetic conditions may be part of a cocktail of contributing factors.”

Now, the team is opening their study up much wider: They’re asking other scientists to participate in their work and contribute data to the search for the complex set of causes for such standings… Busy Times at the World’s Largest Polar Bear Prison; The Atlantic (12-16-2016)
Sea ice has done some extremely odd things in 2016, as climate change is reshaping the Arctic faster than the rest of the planet. According to a new study, there’s a 71 percent chance that the global polar bear population will fall by over 30 percent in the next three decades. The only hope for the polar bear is to reduce carbon emissions, in the hope that the runaway pace of Arctic warming will eventually stabilize and reverse…

Polar Bears Shifting to Areas with More Sea Ice, Genetic Study Reveals; USGS (01-06-2015)
Scientists from around the Arctic have shown that recent generations of polar bears are moving towards areas with more persistent year-round sea ice…

Stranded Polar Bears at Kaktovik, Barter Island, Alaska; Guardian UK (11-21-2011)
Possibly hundreds of bears are becoming stranded on the coastal plain of North Alaska, because they cannot reach the retreating sea ice. Will Rose and Kajsa Sjölander, captured shots of stranded polar bears as part of “70° North”, a multimedia project documenting the impact of climate change and resources exploration in the Arctic…

Southern Beaufort Sea Polar Bear Population Declined in the 2000s; USGS (11-18-2014)
Scientists from the United States and Canada found that during the first decade of the 21st century, the number of polar bears in the southern Beaufort Sea experienced a sharp decline of approximately 40 percent…

Save The Arctic Video, Greenpeace; Greenpeace (09-01-2012)
Greenpeace, Jude Law, Radiohead and hundreds of thousands of people around the world are coming together to demand we save the Arctic from oil drilling, industrial fishing and militarization… “Not a single marine mammal has gone extinct in U.S. waters since the Marine Mammal Protection Act was enacted 45 years ago.

This bedrock conservation bill has helped us protect whales, dolphins, seals, and manatees against dangerous industrial activities, including offshore oil and gas operations. But all this could quickly change if Congress votes to gut this critical Act.

Speak out today to protect the remarkable mammals that call the sea their home.” — NRDC

As many as 300 to 400 dead sea turtles were found off the coast of El Salvador in Jiquilisco Bay late last month.

The massive die off in El Salvador raises big questions for scientists, as authorities are still in the process of collecting information, and details on exact numbers or the cause of the die off have been scarce…

Hundreds of Sea Turtles Found Dead Off the Coast of El Salvador; Smithsonian (11-03-2017)
Authorities aren’t sure what caused the die-off, but a prime suspect is a toxic algal bloom… 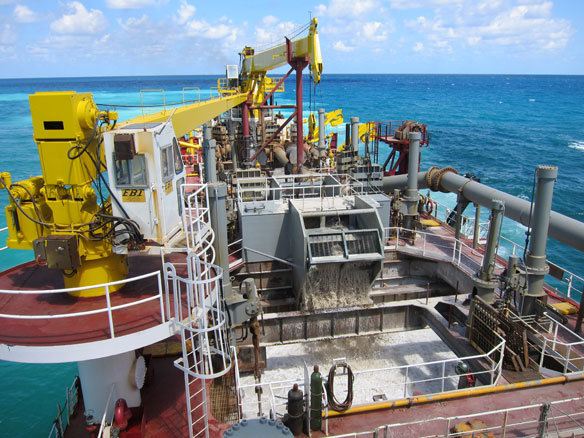 Onboard a sand dredger, Miami, Florida.
“Sand is the second most consumed natural resource, after water…”.”Captions and Photograph by “Sand Wars” Award-Winning Filmmaker: Denis Delestrac. ©2013
As of 2011-2012, when investigative filmmaker Denis Delestrac and team, were collecting and unveiling sand mining datas and information from the professionals involved, “…the sand business was estimated to be a $70 billion industry, worldwide…!”—Denis Delestrac (©-2013)

A variety of maritime activities contribute to sea turtle deaths; The Outer Banks Voice (08-22-2017)
Ask what water-based activity interacts the most with threatened and endangered sea turtles and many will reply without hesitation: commercial fishing. But state records show that to be incorrect. In the eight-week period beginning May 21, reports produced by the North Carolina Wildlife Resource Commission show a total of 101 incidental takes which are interactions with sea turtles. “Takes” mean any type of interaction and aren’t equated to mortality. During that time frame, about five dozen are attributed to the beach nourishment projects in the northern municipalities… Oregon shore crabs exhibit risky behavior when they’re exposed to the antidepressant Prozac, making it easier for predators to catch them, according to a new study from Portland State University (PSU)… Many birds and other wildlife die following an oil spill, but there are also other potential long-terms effects of oil exposure on animals.