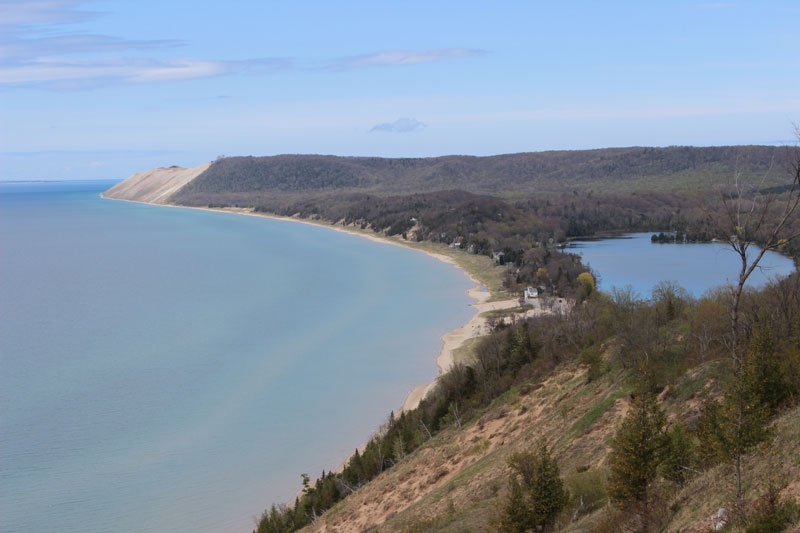 Long featured in travel magazine articles, Sleeping Bear National Lakeshore has come to the forefront since being named ABC Television’s Good Morning America’s “Most Beautiful Place in America” in 2011, and listed as #1 among Dr. Beach’s “Best Great Lakes Beaches” the same year. In 2012 National Geographic included Sleeping Bear on its “10 Best Summer Trips” list. Sleeping Bear’s recognition as one of Nature’s masterpieces of the work of glaciers, lakes, wind and water, led to its 71,000 acres being given National Lakeshore status in the National Park System in 1970 (refs. 1, 2).

“Sleeping Bear’s recognition as one of Nature’s masterpieces of the work of glaciers, lakes, wind and water, led to its 71,000 acres being given National Lakeshore status .”
— William J. Neal & Gregory C. Wilson

Just as significant was the designation of over 32,000 acres of that area as ‘Wilderness’ in the National Wilderness Preservation System in 2014. The region’s topography is the product of more recent geologic history, particularly from the Pleistocene or great ice age to the last melting of North America’s continental glaciers, and the post-glacial history of the ancestral Great Lakes (refs. 3, 4). That complex history of events resulted in today’s fantastic scenery and the four seasons’ attractions of the region. While the inland area is of great interest, the focus here is on the beaches and associated modern dunes.

Sleeping Bear National Lakeshore has a 35-mile mainland shoreline, plus approximately 30 more miles of coast on North and South Manitou Islands. Artifacts tell us that the area has been an attraction to humans since the stabilization of lake levels around 3000 years ago. Europeans first visited these shores in the 17th century when French traders plied the lakes, followed by the English in early 1800s. One of the earliest recorded dune climbs was by the fur trader Gurdon Hubbard who climbed Sleeping Bear with a companion and then hop-skipped-jumped back down the slope (mimicked today at the Park’s dune climb by the thousands). But the area attracted only light settlement.

In 1884 G. K. Gilbert, a pioneer geologist, authored “The Topographic Features of Lakeshores”(p. 69 -123 in the Annual Report of the Director, U. S. Geological Survey) based mainly on his studies of shorelines in the Great Lakes and the Great Salt Lake. His Plate XIV (Figure 1) reproduced a map showing much of what is now the SBNL area, although not all of the shoreline. Note that only one village, Glen Arbor, was shown in the area. The shoreline topography consisted then, as today, of high-dune headlands, separated by lower topographic areas characterized by embayments. The embayment shores are consistently where the best beach/dune systems formed.

From south to north these four beach areas are:

“These beaches and dunes are dynamic landforms, characterized by natural processes that are hazardous from the human point-of-view.”
— William J. Neal & Gregory C. Wilson

Good Harbor Bay is clearly the remnant of a once greater embayment that extended south into the area that is now Little Traverse and Lime Lakes. With time and as lake levels fell, a series of spits and beach/dune ridges formed, separating these lakes and forming a distinct topography of low ridges and swales, although difficult to recognize under the forest cover. The present shoreline provides a good view of modern dune evolution, and an example of how the earlier ridges formed (Figure 12). The sands making up today’s dunes and beaches have been recycled many times – perhaps having come from Canada as glacial sediment, carried by melt waters from those glaciers, and those deposits eroded by ancestral lakes, carried by waters and wind in bars, beaches, and dunes, over and over. Like most Lake Michigan beaches and associated dunes, the sands of these two features at Good Harbor Bay Beach are the same composition, and differ only slightly in grain size (Figure 13).

These beaches and dunes are dynamic landforms, characterized by natural processes that are hazardous from the human point-of-view. These shorelines have been and continue to be eroded. Calm sunny days of summer have led many to settle on the shores of the Great Lakes without knowledge of the terrible storms that lash the coast, or that fluctuating lake levels are like the tidal range of oceans, extending the zone of hazardous conditions landward. Landslides, slumps and creep create hazards even from gravity. And dunes migrate, burying forest and threatening property. Sleeping Bear is no exception. The first safety precaution at the shore is to heed the rip-current warning signs. In addition, steep slopes have an attraction, but losing your footing can have serious consequences. And yes, landslides do occur in the dunes. In 1995 a large landslide occurred at Sleeping Bear Point, depositing approximately 1 million cubic meters of sediment on the adjacent lake floor, extending more than 2 miles offshore! Similar slides occurred in the same area in 1914 and 1971 (refs. 5, 6). Even in undeveloped park and wilderness lands, shoreline change must be accounted for in planning, and the USGS has assessed all of the Great Lakes National Lakeshores for coastal change potential (ref. 7).