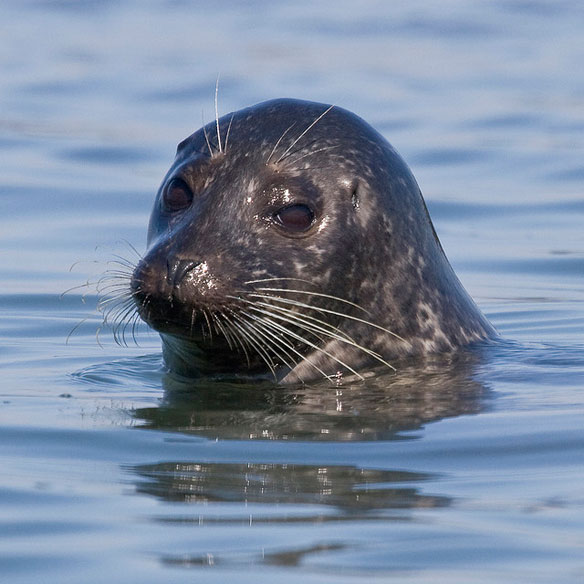 NOAA announced that the high number of seal deaths that have occurred along the New England coast since September has been declared an “Unusual Mortality Event.”

An unusual mortality event (UME) is defined under the Marine Mammal Protection Act as: “a stranding that is unexpected; involves a significant die-off of any marine mammal population; and demands immediate response.”

This will enable the agency to direct additional resources to further investigate the cause of these seal deaths.

“We want to remind people to not get close to seals encountered along the shore, to keep their pets away and to report any sightings to us through our stranding hotline, while we continue to assess whether there is any potential human health risk,” said Dr. Teri Rowles, National Marine Mammal Health and Stranding Response Program Coordinator, NOAA Fisheries Service.

From Sept. 1 to Nov. 3, NOAA’s national Marine Mammal Stranding Network, the New England Aquarium’s Marine Mammal Rescue Program and the University of New England’s Marine Animal Rescue Center, have been working with NOAA to respond to a reported 146 seals strandings in Maine, New Hampshire and northern Massachusetts. Most of the animals were harbor seals less than a year old. This is more than three times the average number of strandings that typically occur this time of year.

Preliminary pathology, biotoxin and virology analysis has been conducted on samples from five seals examined by the New England Aquarium. Samples from the five seals has tested positive for the Influenza A virus, while test results for six other viral pathogens and biotoxins were negative.

Even though preliminary results have been received, they are only indicative of those five cases, and additional evaluations are underway to determine whether the influenza virus has played a role in the overall mortalities.

An investigation team of marine mammal experts will work closely with NOAA, New England Stranding Network partners and the Working Group on Marine Mammal Unusual Mortality Events to identify and characterize the specific type of Influenza A virus found in these animals.

Seals, like other marine mammals (dolphins, whales, and sea lions), are protected under the Marine Mammal Protection Act. People and their pets should maintain a safe distance to avoid disturbing the animal, being subject to a fine or risking injury. Some safe viewing tips:

Call NOAA Fisheries Service’s stranding hotline at 1-866-755-NOAA (6622), or a local marine mammal stranding network member or visit NOAA’s Northeast Region website for local contact information.
Stay at least 50 yards (150 feet) away from seals or other marine mammals.
Keep dogs on a leash and don’t allow them to approach seals. Seals and dogs can easily infect each other with diseases since they are closely related species. 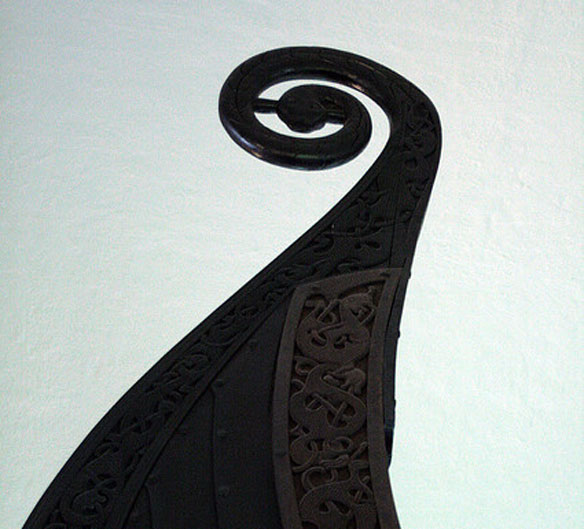 Ancient tales of Norse mariners using mysterious sunstones to navigate the ocean when clouds obscured the Sun and stars are more than just legend, according to a study, in Proceedings of the Royal Society A: Mathematical and Physical Sciences, a peer-reviewed journal published by Britain’s de facto academy of science, the Royal Society.

Over 1,000 years ago, before the invention of the compass, Vikings ventured thousands of kilometres from home toward Iceland and Greenland, and most likely as far as North America, centuries ahead of Christopher Columbus.

Evidence show that these fearless and fearsome seamen navigated by reading the position of the Sun and stars, and through an intimate knowledge of landmarks, currents and waves.
But how they could voyage long distances across seas at northern latitudes often socked in by light-obscuring fog and clouds has remained an enigma.

“A depolarizer as a possible precise sunstone for Viking navigation by polarized skylight”, Proceedings of the Royal Society A: Mathematical and Physical Sciences 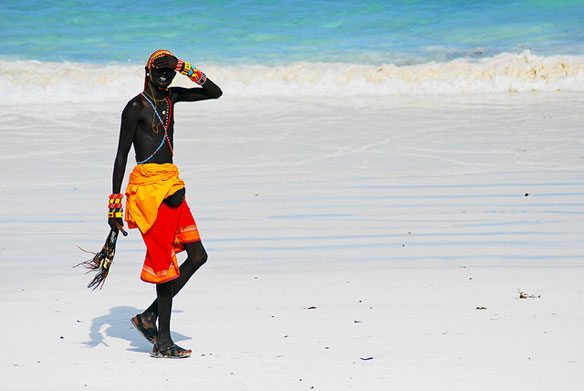 Excerpts; By The International Institute for Applied Systems Analysis (IIASA).

As the global media speculate on the number of people likely to inhabit the planet on October 31 an international team of population and development experts argue that it is not simply the number of people that matters but more so their distribution by age, education, health status and location that is most relevant to local and global sustainability.

Climate: Which Nations, Cities Most At Risk?

Residents fled Thailand’s capital, Bangkok, on Thursday after authorities warned the city would soon be flooded and called a special five-day holiday to let people escape… 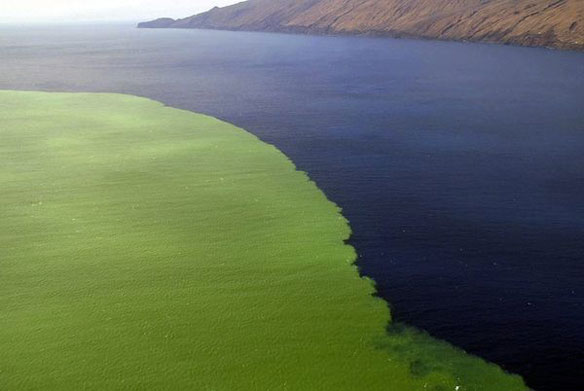 The Atlantic turned lime green as lava and gas billow from an underwater volcano off the coast of Hierro island, the smallest and farthest south and west of the Canary Islands.

Off the coast of El Hierro, in the southwest reaches of the Canary Islands, Earth has been spewing gas and rock into the ocean. The island off the Atlantic coast of North Africa—built mostly from a shield volcano—has been rocked by thousands of tremors and earthquakes since July 2011, and an underwater volcanic eruption started in mid-October.

The eruption is the first in the island chain in nearly 40 years.

On October 23, 2011, the Moderate Resolution Imaging Spectroradiometer (MODIS) on NASA’s Terra satellite captured this natural-color view of El Hierro and the North Atlantic Ocean surrounding it. A milky green plume in the water stretches 25-30 kilometers at its widest and perhaps 100 kilometers long, from a large mass near the coast to thin tendrils as it spread outs to the southwest. The plume is likely a mix of volcanic gases and a blend of crushed pumice and seafloor rock.

Tremors were reported for the past several months from seismic stations on El Hierro, particularly in the northwest of the island. Then on October 12, 2011, the strength of the tremors significantly decreased while foaming, rock-strewn plumes appeared in the sea to the south of the island. The underwater plume of volcanic debris has persisted for nearly two weeks and has been mixed and dispersed by ocean surface currents. The eruption is occurring in water that is tens to a few hundred meters deep.

Geologist and blogger Erik Klimetti offered this analysis: “It looks like the main fissure might be 2-3 kilometers in length and is close to on strike with the rift axis for the main El Hierro edifice. Ramon Ortiz, coordinator of a government scientific team, said that if/when the eruption reaches shallower water, we should expect to see the surface water start to steam, followed by explosions of steam and magma and finally the emergence of an island.” 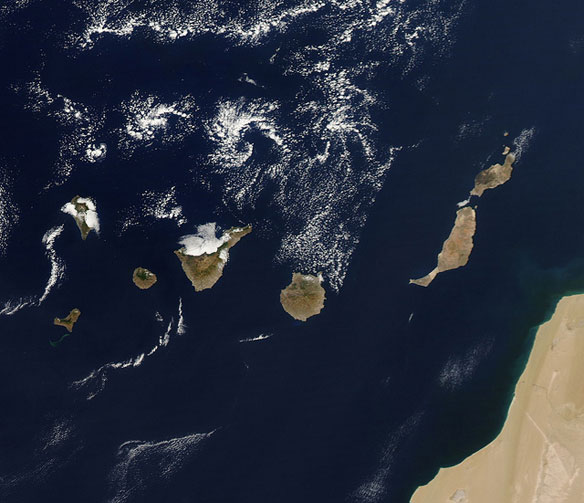 “The only tree”. Skallingen peninsula on the Danish west coast. This is the only tree in the dune landscape on the peninsula which formed only after a storm in the 17th Century. Caption and Photo source: ©© Dans le Grand Bleu

How is the changing global population affecting people’s daily lives? With the UN set to announce that there are now seven billion people on the planet, BBC News reporters spoke to seven people from around the world to hear their stories. 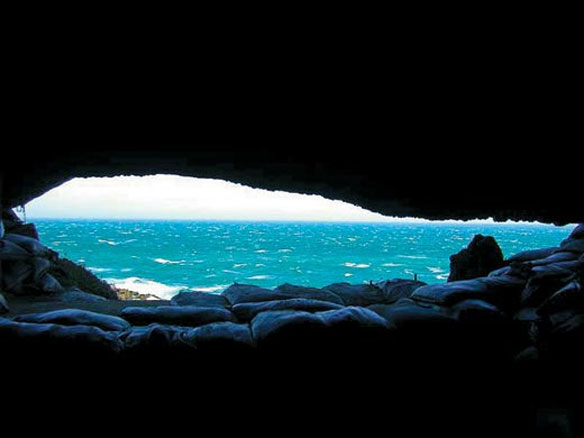 Researchers in South Africa have discovered what may have been the world’s earliest artist’s studio.

A 100,000-year-old workshop used to mix and store the reddish pigment ochre has been discovered in Blombos Cave on the rugged southern coast near Cape Town.

At the same site, scientists have found some of the earliest sharp stone tools, as well as evidence of fishing… 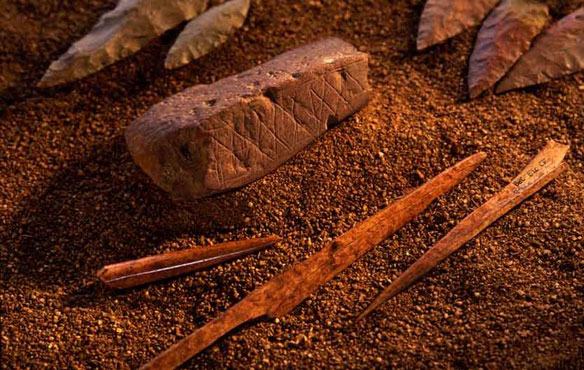 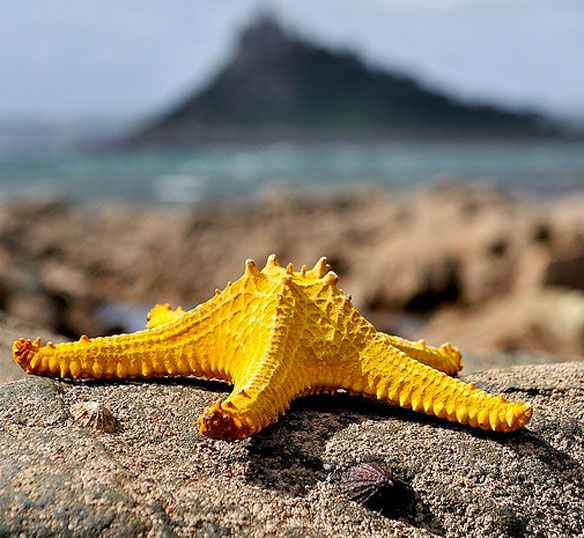 New evidence supports the theory that comets delivered a significant portion of Earth’s oceans, which scientists believe formed about 8 million years after the planet itself.

For the first time, astronomers have found water on a comet that’s a chemical match for water on Earth, a new study says. The discovery backs up theories that water-rich comets helped fill ancient Earth’s oceans.

Planet-formation models indicate that early Earth was much too hot to sustain liquid water on its surface, making the origin of Earth’s oceans a mystery… 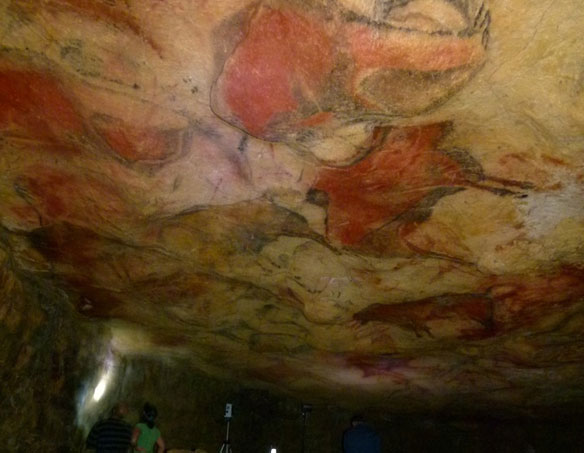 At least 14,000 years ago, artists took to Altamira cave in Northern coastal Spain, with charcoal and red pigments, painting bison, deer and their own handprints on the rock walls and ceiling.

The Altamira cave paintings were discovered in 1879, and is located near the town of Santillana del Mar in Cantabria, Spain, 30 km west of the port city of Santander, an historical region of Cantabria situated on the north coast of Spain.

The special relevance of Altamira Cave, comes from the fact that it was the first cave in which prehistoric cave paintings were discovered. When the discovery was first made public, it led to a bitter public controversy between experts which continued into the early 20th century, as many of them did not believe prehistoric man had the intellectual capacity to produce any kind of artistic expression. The acknowledgement of the authenticity of the paintings, which finally came in 1902, changed forever the perception of prehistoric human beings. Wikipedia

The cave with its paintings has been declared a World Heritage Site by UNESCO, and have attracted huge numbers of visitors, 175,000 in 1973, the busiest year on record.

“The caves are inscribed as masterpieces of creative genius and as the humanity’s earliest accomplished art. They are also inscribed as exceptional testimonies to a cultural tradition and as outstanding illustrations of a significant stage in human history.” Unesco

However, this prehistoric art gallery was closed to the public in 2002 after photosynthetic bacteria and fungi were found to be consuming pigments at alarming rates, but plans to reopen the caves could restart the damaging processes and have scientists raising the alarm… 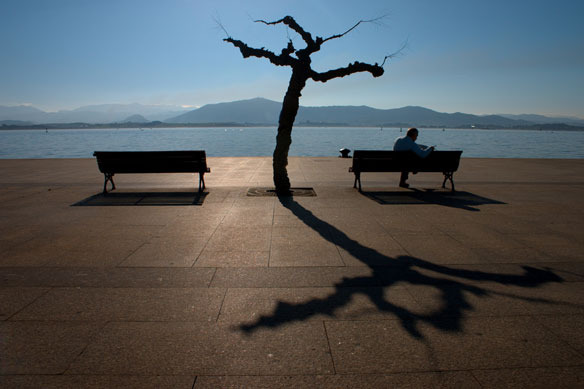 The port city of Santander is the capital of the autonomous community and historical region of Cantabria situated on the north coast of Spain. Photo source: ©© Alvarolg