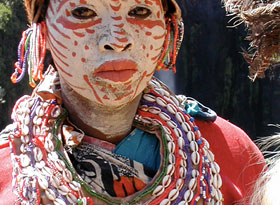 Certain types of seashells have been used by natives as currency on every continent of the world except Antarctica. This Kikuyu woman is in traditional dress showing hundreds of Cowrie shells.
Photo: Flickr user wayfaring stranger.

Seashells are an important part of biological and geological beach processes as well as an important part of human culture. The organisms that produce the shells provide huge quantities of food for animals including people forming the basis of a multi-billion dollar portion of the global commercial fishing industry. Seashells are a major source of organic deposits to the seafloor and make up the majority of limestones and chalks. Culturally, people have collected shells for millennia for a wide variety of uses; European explorers travelling to West Africa were surprised to find the cowrie shells (see photo below) being exchanged as money instead of the silver or gold to which they were accustomed. Additionally, native people all over the world have used seashells for basins, tubs, buckets, lamps, and cutting tools. But to the average beachgoer today, shells represent a major point of interest for trips to the coast. People spend hours combing the beach for shells of interest to them. Some people are novices and some are experts, but the fascination is the same; seashells are fascinating and beautiful reminders of the complexity of life. 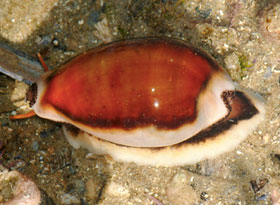 Exactly what is a seashell?

Most seashells come from mollusks, a large group of marine animals including clams, mussels, and oysters, which exude shells as a protective covering. Shells are excreted from the outer surface of the animal called the mantle and are made up of mostly calcium carbonate. As the animal ages, the shell gets larger and more calcium carbonate is exuded from the mantle. Color patterns are specific to different species making is relatively easy to tell different species apart. While some shells are similar, most differences are recognizable to the naked eye. After the animal dies, the durable shell remains. Ocean currents carry shells underwater where they often come to rest on the beach. Because beaches change a little bit each time the tide changes, patches of shells may move around daily or appear during certain parts of the day based on tides. 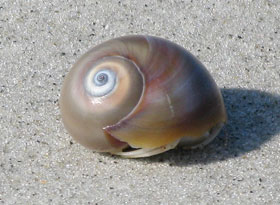 Mollusks are responsible for most of the shells you see on a trip to the beach, but pinpointing exactly which species is sometimes difficult due to the sheer size of the mollusk phylum. The variety and number of mollusk species is huge; over 110,000 estimated species makes it one of the largest phyla of animals behind only insects (Arthropods) and worms (Nematodes). There are six major classes of Mollusks that have shells:

Gastropods are the largest division of the mollusks, based on numbers of species. The group varies greatly with most members living in salt or freshwater, but a few living on land and some without shells. Gastropod literally means stomach foot and they may be herbivorous or carnivorous. A huge variety of sea snails live in the oceans with spiral-like shells. Many gastropods are scavengers or predators and use a siphon to move water into their shell where they determine if food or prey is close by. Other gastropods use a sharp mouth part called a radula to eat seaweeds and other foods. Clean water and clean beaches all are essential to maintaining healthy gastropod populations as well as species diversity.

Bivalves are what many people think of when they think of a seashell. Clams, oysters, mussels, cockles, and scallops make up this class of mollusks that is important economically in the fishing industry all over the world. All bivalves live in water, have two shell halves that protect the soft body of the animal, and most are filter feeders. Filter feeding moves water into the shell and across membranes and organs that trap the food. As a result, bivalves are sensitive to changes in water quality and may not be safe to eat if water quality is poor such as is the case in the Chesapeake Bay in the United States and many other coastal areas around the world. When eating shellfish, do the required research to see if your meal is safe.

The polyplacophores, more commonly known as chitons, live in the water and are covered by 8 protective plates. These simple creatures rove the intertidal and deep water environments crawling into crevices in search of food and rolling into a ball when threatened. There are around 1000 species and they live in waters around the world.

Scaphopods are tusk-shaped shells with openings at both ends that live on soft ocean bottom away from the intertidal zone. Like many gastropods, scaphopods have a sharpened mouth part called a radula that grinds food and are protected by their shells.

These animals were thought to be extinct preserved only in the fossil record until 1952 when live specimens were discovered in deep ocean waters. Their simple shells are less complicated and evolutionarily advanced than other mollusks. They are an ancient species dating to some 500 million years ago. They feet through a simple mouth located on the under side of their bodies and feed on organic debris on the bottom to the ocean. 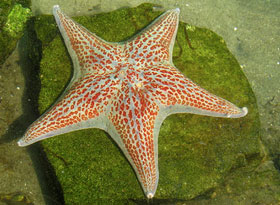 Some exceptions to the generalities above are echinoderms and crustaceans. Echinoderm means “spiny skin.” Examples of echinoderms are sea stars, sand dollars, and sea urchins. These animals have a hard exoskeleton made of calcium carbonate called a test. After the animal dies, the test remains intact. These easily recognizable skeletons called can sometimes be found in number on the beach.

Crustaceans like crabs, lobsters, and horseshoe crabs also have shells which can easily be distinguished from shells of mollusks.