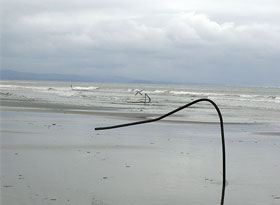 Water pipes left over from houses that have disappeared in Washaway Beach, Washington state.
If you look carefully you can see that four rows of houses have disappeared.
Photo: Orrin Pilkey

Most people are familiar with the terms low tide and high tide and know that the reference is to where the water is on the beach, either low or high. Water levels change as the result of the gravitational pull of the moon and sun on the oceans’ waters. When an ocean is directly underneath the moon, the water will mound up under the gravitational pull of the moon. On the opposite side of the planet, the ocean’s surface also will bulge as a result of the combination of less lunar gravity plus the rotational force of the earth. These two bulges are the high tides, and in between where the water is correspondingly depressed the tides are low.

The moon will pass any point once every 24 hours and 50 minutes, which causes that point to experience two high tides and two low tides each day. Since the moon passes with that extra 50 minutes every day, the timing of the tides at any beach will shift by an hour or so every day. Daily changes in sea level are caused by the lunar tides. In North Carolina, the difference between high and low tide levels hovers around three feet. In other parts of the world the tides may differ by as little as one foot to as much as 40 feet. In Pamlico Sound, North Carolina, winds affect water level more than lunar tides.

The moon and sun pass the earth in different positions throughout the year. For this reason, the height of the local tides changes from time to time. The maximums are called spring tides, when the tidal range on a beach is the greatest. This maximum happens when the moon is either full or new. The minimum or neap tide occurs when the moon is in its first or third quarters. The spring tide at Atlantic Beach, North Carolina, is typically six feet and the neap tide is two feet. Depending on the orientation and position of a shoreline, it may experience different numbers and heights of tides. In many parts of the world, the tides are semidiurnal, meaning there are two high tides of approximately the same height and two low tides of roughly the same height each day.

Sea level changes over the short term in a variety of ways. Storms blowing ashore cause the level of the sea to rise for hours at a time or winds blowing offshore may cause the level of the sea to temporarily drop. Seasonal wind patterns (i.e., winter/summer differences) or changes related to El Niño can cause rises or falls in sea level that last several months. The most spectacular short-term rises in sea level occur during big storms. The high water levels caused by a storm are called storm surges, which is known to raise the shoreline water levels of some areas over 20 feet! Such a rise is the result of the combined effects of low atmospheric pressure, mounding due to the circular wind and surface currents moving about the center of the storm, and the piling up of water as it is pushed from the deep ocean into shallow nearshore waters. Storm surge carries sand (and buildings) landward as it comes ashore, and sweeps the same seaward on its ebb as the storm moves away and the wind reverses direction.

Over the last 3 million years, sea level around the world has repeatedly risen and fallen by over 300 feet. When ice covers the extreme northern and southern portions of the continents, sea level is low, and when glaciers and ice caps melt, sea level is high. North Carolina’s coastline has been as far out as the edge of the continental shelf during low sea level, and over 75 miles inland from the present coastline during periods of high sea level. The last low sea level was around 18,000 years ago. The continental glaciers then melted and sea level approached its present position around 5,000 years ago. Throughout that time span, beaches were always present along the landward retreating shoreline.

Sea level has continued to rise very slowly over the last 5000 years. In part, this was because the weight of the water on the continental shelf (formerly high and dry) is causing coastal land to sink. About 100 years ago the rate of rise accelerated as the result of a number of coinciding events probably related to the Greenhouse Effect although it is important to note that the connection of global warming and the greenhouse effect is still controversial. There is however no question that global warming is occurring. Global warming is increasing the temperature of the oceans. Warmer water expands and takes up more space than cooler water, so the present rise in sea level is partially due to warmer water. Global warming also is melting mountain glaciers all over the world and adding water to the ocean. These processes lead to higher sea levels. When sea level rises, the beach must adjust by shifting landward and slightly upward.

How is sea level rise measured?

Tide gauges provide the best record of sea level as it fluctuates daily, annually, and over decades and centuries. From the longest viewpoint and as an example, sea level along the North Carolina shore in the United States is rising at about one to one and one half feet per century. This number is obtained by taking the average level of the sea surface each year as determined by tide gauges. This rate may not be an impressive number, but considering that the slope of the Coastal Plains (the mainland behind the beaches) there averages around a one foot increase in elevation for every 2000 feet of horizontal distance (1/2000), a one-foot-per-century sea level rise becomes very significant. In theory each foot of rise should push the regional shoreline back an average of 2000 feet (Fig. 1.5). But it’s never quite that simple. Other factors influence the sea level rise such as storm surges, high and low tides, and wind.

Figure 1.5. Relation between sea-level rise and the gentle slope of the coastal plain, showing why a rise of one-and-a-half feet per century (the rate in North Carolina) is very significant. The average slope of the lower coastal plain here is 1:2,000 (for every one foot in elevation there is a two-thousand-foot horizontal distance), which means that, in theory at least, for every one foot of sea-level rise there should be two thousand feet of shoreline retreat. (Adapted from Pilkey et al., The North Carolina Shore and Its Barrier Islands [1998]. Drawing: Amber Taylor