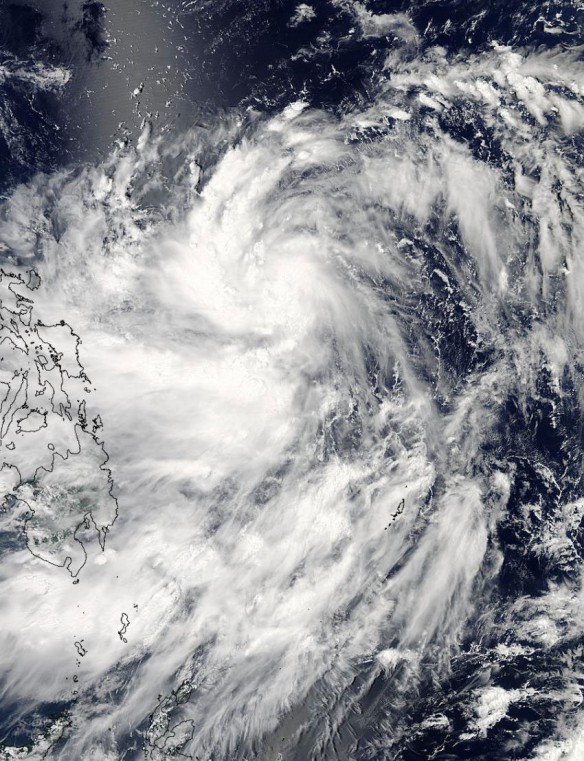 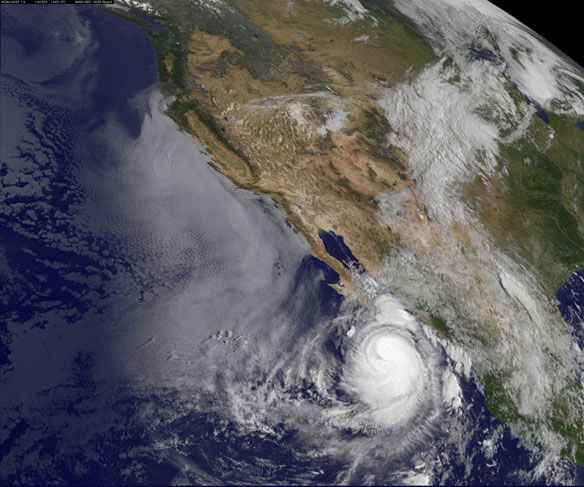 Hurricane Norbert Creates Waves On Pacific Coast – In Pictures, Guardian UK
As hurricane Norbert moves north along the Baja peninsula, its strong winds have produced high surf and tides along the coasts of Mexico and California… 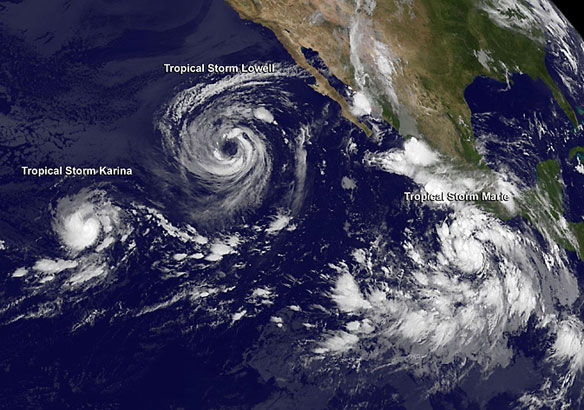 Two NASA satellites captured visible and infrared pictures that show the massive size of Hurricane Marie. Marie is so large that it is bringing rough surf to the southern coast of California while almost nine hundred miles west of Baja California.

The Atmospheric Infrared Sounder or AIRS instrument that flies aboard NASA’s Aqua satellite gathered infrared data on Marie when it passed overhead on Aug. 27 at 6:14 a.m. EDT. An infrared image created from that data showed the coldest cloud top temperatures and strongest thunderstorms were around Marie’s center and southern quadrant.

Because of Marie’s large size and its movement to the north, it is creating rough surf that is now reaching southern California’s shoreline. The National Hurricane Center noted that swells generated by Marie will continue to affect much of the west coast of the Baja California, Mexico peninsula and now including the extreme southern Gulf of California and southern California through Thursday, August 28.

Life-threatening surf and rip current conditions are likely as a result of these swells as well as minor coastal flooding.

As Marie moves in a northerly direction it will be moving over progressively colder waters so the National Hurricane Center forecasts additional weakening in the next two days. My Thursday, Marie is expected to become a post-tropical cyclone… 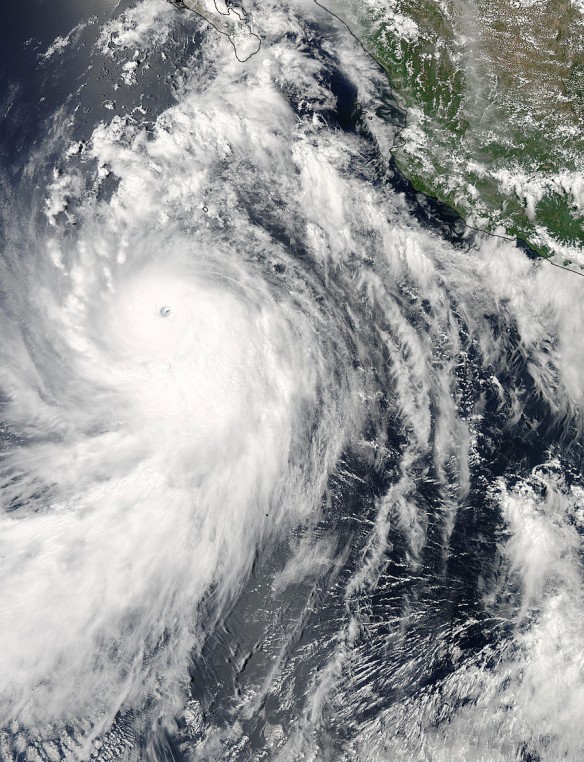 An estimated 10,000 families in Mexico have been affected by Hurricane Marie, which has been moving along the Pacific Coast towards the United States… 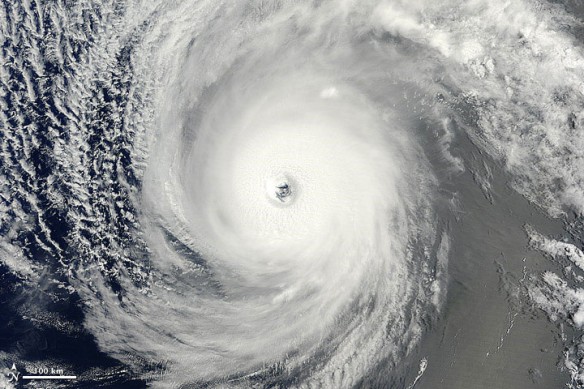 In early August 2014, not one but two hurricanes were headed for the Hawaiian Islands. Storms arriving from the east are a relative rarity, and landfalling storms are also pretty infrequent.

The Moderate Resolution Imaging Spectroradiometer (MODIS) on NASA’s Terra satellite captured this natural-color image of Hurricane Iselle over the Pacific Ocean at 10:40 a.m. Hawaiian time (1940 Universal Time) on August 4, 2014. Shortly after the image was acquired, the U.S. Joint Typhoon Warning Center reported that Iselle was a category 4 hurricane with sustained winds at 120 knots (140 miles or 220 kilometers per hour) and centered at 16.10° north latitude, 137.40° west longitude.

The MODIS image shows a nearly cloud-free eye in the center of a symmetrical storm; there is solid ring of clouds around the center rather than intermittent, spiral bands. Iselle was at its peak intensity at the time and it was likely an annular hurricane. Atmospheric researchers also detected signs of mesovortices near the eyewall. The smaller, tighter rotating structures within the larger storm are often associated with tornadoes on land.
Forecasters from the Central Pacific Hurricane Center predicted on August 6 that Iselle would make landfall on the island of Hawaii as a strong tropical storm or a category 1 hurricane late on August 7. Wind damage and heavy surf are likely, but heavy rainfall, flash floods, and landslides were the greatest concern as Iselle approached.

On August 5, the Visible Infrared Imaging Radiometer Suite (VIIRS) sensor on Suomi-NPP captured natural-color images of both Iselle and Hurricane Julio en route to Hawaii. The image below is a composite of three satellite passes over the tropical Pacific Ocean in the early afternoon. Note that Iselle’s eyewall had grown less distinct; the storm had descreased to category 2 intensity. The bright shading toward the center-left of the image is sunglint, the reflection of sunlight off the water and directly back at the satellite sensor. 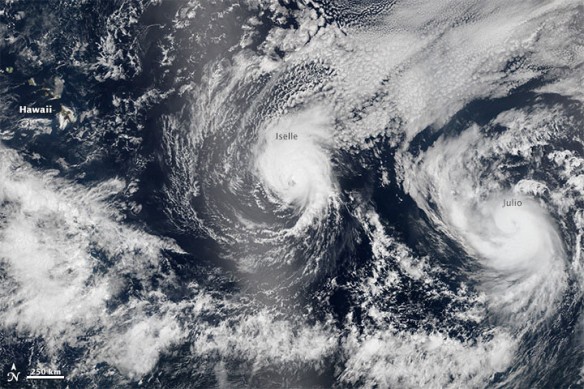 On the same day, Terra MODIS also imaged Iselle and Julio, as well as Hurricane Genevieve (southwest of Hawaii); click here to view that mosaic. The black shapes across the MODIS image are gaps in the satellite’s view. Terra flies in a lower orbit than Suomi-NPP, so its images are narrower and have gaps near the equator, but they can be more detailed.
You can also see a video below of the three storms in motion from August 2–4, as observed by the GOES-West weather satellite.

As of midday on August 6, Hurricane Julio was a category 1 storm, but it is expected to weaken to tropical storm force in the coming days. Forecasts suggest that the eye will pass north of the Hawaiian Islands on August 10, but it is possible that there will be some effects on land.

Why Hurricanes Are So Rare in Hawaii? Climate Central
Hurricanes and tropical storms are normally steered clear of the Hawaiian Islands by a high pressure feature that is typically parked to the northeast of the islands and keeps the weather consistent throughout the year. That high pressure is particularly strong from May through October — prime hurricane season… 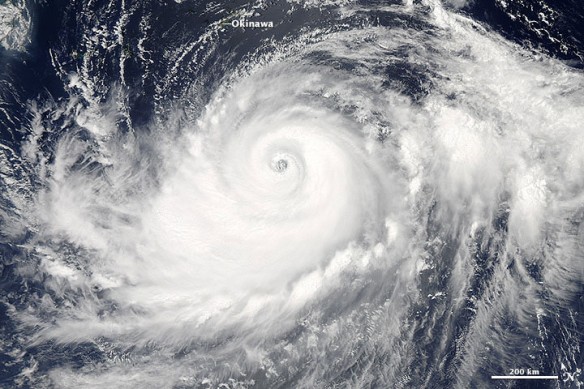 A week after forecasters wrote Genevieve off as dead, the tropical storm has barreled back to life, strengthening from a hurricane into a super typhoon as it crossed the International Date Line early this morning, Eastern Time (Aug. 7). 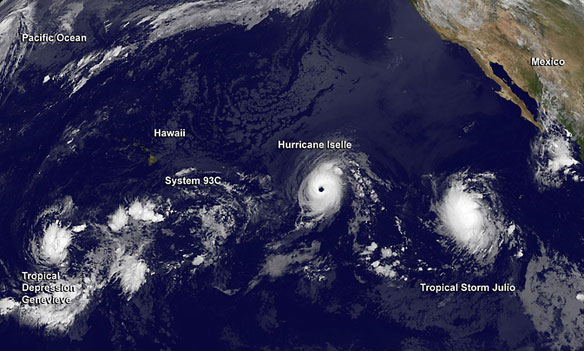 Two storms, Hurricane Iselle and Tropical Storm Julio, are headed for Hawaii later this week in an unusual one-two punch that could be an effect of a developing El Nino pattern, the National Weather Service said…

It is extremely rare to have such major storms in such quick succession, according to Weather Channel lead meteorologist Kevin Roth. He said the most recent example was in 1982 when two significantly weaker tropical storms and depressions hit ten days apart…

NASA Sees Heavy Rain in Hurricane Iselle as it Heads Toward Hawaii, NASA

Tropical Storm Bertha approached the Caribbean on Friday as islands in the eastern region prepared for heavy rains and strong winds.

The storm’s maximum sustained winds increased slightly Friday to 50 mph (85 kph), but no significant change in strength is expected in the next two days. Bertha was centered about 45 miles (70 kilometers) east of Martinique and was moving west-northwest at 22 mph (35 kph)… 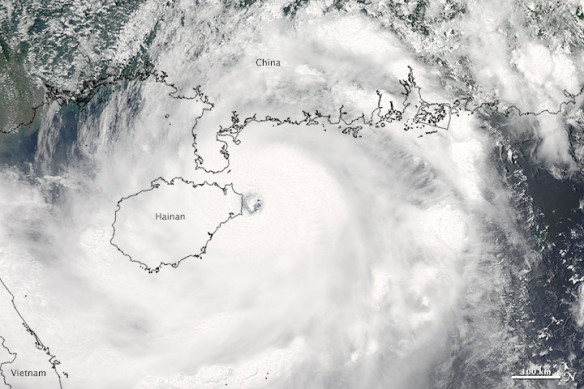 The Moderate Resolution Imaging Spectroradiometer (MODIS) on NASA’s Aqua satellite acquired this image of Typhoon Rammasun at 1:35 p.m. local time (0535 UTC) on July 18, 2014. In the image, the storm has a well-defined eye situated just off the coast of northern Hainan; it is surrounded by bands of thunderstorms stretching across the South China Sea and the Gulf of Tonkin. Image and Captions source: NASA / Earth Observatory

Three days after drenching the central Philippines in flooding rains, Typhoon Rammasun smashed into southeastern China and was still headed for northeastern Vietnam early on July 19, 2014. With a name meaning “thunder of God,” Rammasun approached the coast as a category 4 super typhoon and one of the strongest to hit China’s Hainan Province in 41 years.

The warming of ocean waters due to the buildup of greenhouse gases in the atmosphere is a concern for the future threat of tropical cyclones, though exactly how climate change will affect the frequency and intensity of storms is an active area of research…