Mining Of Coastal Sand: A Critical Environmental And Economic Problem For Morocco 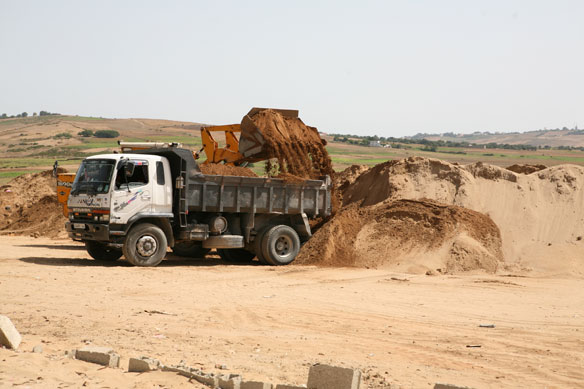 In Morocco, the extraction of beach and dune sand for use in the construction industry is destroying significant portions of the nation’s natural heritage. The authors of this report have significant experience in evaluating coastal mining worldwide. We believe that the coastal sand mining operations that we witnessed in Morocco are the world’s largest. In addition, the environmental impacts of the sand extraction are likewise enormous. Beach mining, mainly near Morocco’s major coastal cities, has created lunar-like landscapes on the coast, destroyed the littoral marine ecosystem, is endangering adjacent wetlands, and has significantly increased the vulnerability of coastal infrastructure to storms and rising sea level. Once beautiful coastal dunes have been entirely removed along long reaches of shoreline. This is a potential economic disaster for coastal tourism in Morocco. Many beaches have been so heavily impacted by mining that they have been rendered unusable for touristic development. For the sake of its future generations, Morocco should halt the mining of coastal sand now and find new sources of aggregate.

The authors base the following report on fieldwork conducted in Summer 2007 and on interviews with local, coastal residents.

Introduction to the Issue

Most open-ocean shorelines have sand deposits that exist in equilibrium with wave, current and wind processes. This sand exists in several connected environments. Onshore there are beaches, with sand deposited by waves and currents, and sand dunes deposited by the wind. Offshore, there is sand stored on the shoreface (reaching from the beach out to a depth of 10 m or so) and in deltas (tidal and river). These deposits are linked to one another such that addition or removal of sand from one area affects all of the other environments. For this paper, we refer to all sand deposits that are connected to (i.e. are currently shrinking or growing) the present marine environment as the coastal sand body. Some coasts have sand bodies that are somewhat disconnected from the modern coastal sand deposits. This sand may occur well below or above present sea level representing deposits formed in the past when the level of the ocean was higher or lower than today.

Beaches can provide a cheap source of sand for use in concrete and for a variety of other construction purposes. Beach sand is inexpensive because it is already unconsolidated and is easy to remove with front-end loaders or even by hand loading of trucks. The continuous activity of surf zone waves provides a well-sorted sand that is free of mud. Perhaps most significantly, beaches are often not privately owned, they are public, and represent a “free” source of aggregate to those willing to take it.

Most beach sand is derived locally from sea cliff erosion or from rivers that drain the upland (Figures 1 and 2).

The sand grains travel along a particular beach either by shore-parallel or shore- perpendicular transport in surf zone currents formed by waves. Speaking in general terms, the Moroccan coast has a very large coastal sand body resupplied by regular erosion of cliffs and episodic injections from rivers in flood. The Moroccan coastal sand body is much larger than the coastal sand bodies of the East and Gulf coasts of North America. We can only assume that those engaged in sand mining in Morocco believe that they will do little harm because the original sand deposits were so large. Sadly, this is not the case.

Mining of beach and dune sand is a global phenomenon. In recognition of the damage that such mining does and of the need to preserve beaches for future generations, mining has effectively been halted in many countries. Yet, it remains an important global problem. We have recently documented environmentally damaging beach mining in more than 30 countries worldwide.

Mining of coastal sand bodies has gone on for as long as humans have lived near the shore. Initially it occurred on a bucketful scale and at a local level. Now it occurs on the scale of long lines of large dump trucks containing more than 10 cubic meters of sand each. As humans have devised more efficient ways to remove large volumes of sand and as shorefront development has simultaneously increased, coastal sand mining has become a major global problem.

We believe that at the present time, the most extensive mining of onshore coastal sand in the world occurs in Morocco. In July, 2007, we observed an operation that likely involved the removal of hundreds of dump trucks of coastal sand in a single day (Figure 3). Many coastal environments have been removed completely over hundreds of hectares. The damage is stunning and saddening.

The problems created by sand mining are numerous. Below is a brief summary focusing on the problems recently documented in Morocco.

The seasonal dry, sunny weather, warm coastal ocean with excellent surfing and swimming opportunities and proximity to existing international airports in Casablanca, Rabat and Tangiers represent an extraordinary combination of conditions conducive to tourism. Sand mining has turned these sites into ugly moonscapes that no tourist would want to visit. With the sand gone, the beaches are too hard for lounging on. They are even difficult to walk on.

We observed several types of coastal sand mining south of Tangiers in Morocco in July, 2007. The following examples are listed in order of the degree of economic and environmental damage. The first approach, bluff top mining is the least damaging and direct mining of the intertidal zone is the most damaging. 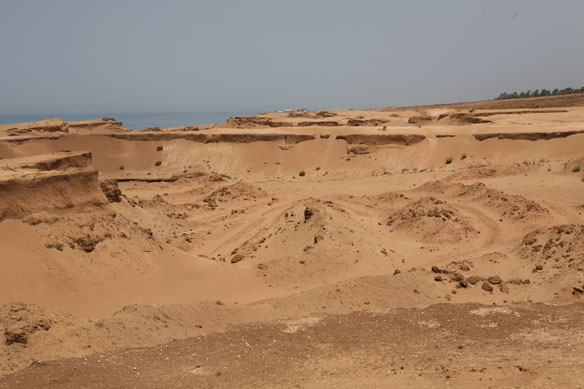 Future mining of the modern coastal sand body should be avoided. There are numerous alternative sources of sand available, most of which will be at least slightly more expensive than the presently used coastal sand.

On all coasts with low inland slopes, “fossil” coastal sand bodies exist that were deposited in the geologic past when the level of the ocean was higher or lower than today. These older sand bodies are often no longer directly connected to modern coastal ecosystems. Such sand bodies, where they are present, offer promise as sand mining sites that would be much less damaging than the mining of the current coastal sand body that is in equilibrium with the sea.

In Europe and North America, where population density is very high near that coast, offshore mining of sand is a common occurrence. Morocco possesses extensive higher-than-present coastal sand deposits (Figure 9), and likely harbors substantial offshore reserves. Finally, crushing rock is an alternative that many Caribbean Island nations have turned to.

If mining continues on some limited basis, reclamation (reshaping) of the impacted landscapes must be required. In some areas reclamation of existing, abandoned mining sites should be considered.

Future regulations and decisions concerning sand mining in Morocco should consider the need to provide future generations of Moroccans with high quality, healthy beaches. The long term economic potential of healthy, beautiful beaches is huge and is worthy of extensive efforts to preserve them.