Where Has All the Plastic Gone? 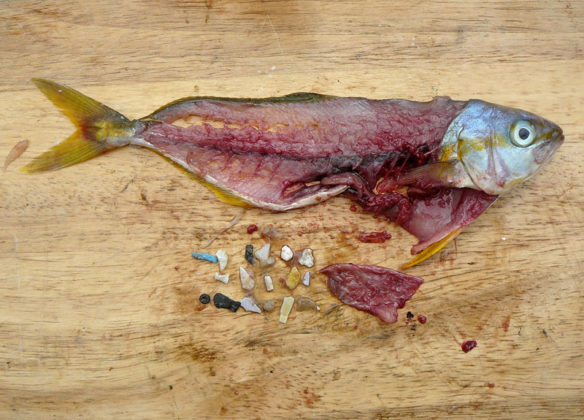 Hundreds of kilometers off the coast of southern California lies the Great Pacific Garbage Patch, a vast soup of degraded plastic fragments. On the other side of the country, tiny flecks of floating plastic swim in a swath of seemingly pristine Atlantic Ocean at least two-thirds the size of the United States.

Oceanographers have quantified trends in the Atlantic “plastic soup” for the first time, and they’ve come to a surprising conclusion: The amount of plastic in the Atlantic has remained steady for 2 decades despite a steep rise in industrial plastic production. That suggests that either people are keeping their trash on land or plastic is going to some unknown destination in the sea.

Since 1986, students on research sailing trips led by Sea Education Association (SEA) in Woods Hole, Massachusetts, have been documenting plastic snagged in their plankton nets in the western North Atlantic Ocean and Caribbean Sea. The students and scientists tow a net behind their ship for about 2 kilometers, then use tweezers to pick out and hand-count trapped plastic pieces, most no larger than your pinky fingernail.

In their first publication of these data since the late 1980s, the SEA team reports that it found plastic in more than 60% of 6136 tows over 22 years. The levels are low close to shore but rise hundreds of kilometers off the coast between 22 and 38 degrees latitude (roughly from the Bahamas to Baltimore).

Researchers can’t tell the ages of individual plastic bits, since there are no chemical techniques for dating petroleum-based products. That makes it nearly impossible to tell if the seemingly stable amount of trash is actually due to turnover.

But despite huge annual fluctuations in plastic levels (probably a result of smaller-scale eddies and winds, Law says), the overall amount of plastic in the North Atlantic Ocean has been steady across the two-plus decades. This is surprising because the amount of plastic produced globally and thrown away in the United States has grown several times over the same period, and presumably some of it winds up in the ocean.

Meanwhile, even though the SEA expedition traveled a thousand miles (1,609 kilometers) east of Bermuda, “we still can’t find the eastern edge” of the patch, Law said…

Plastic Accumulation in the North Atlantic Subtropical Gyre; Science Magazine
Plastic marine pollution is a significant environmental concern, yet a quantitative description of the scope of this problem in the open ocean is lacking. Here, we present a time series of plastic content at the surface of the western North Atlantic Ocean and Caribbean Sea from 1986 to 2008. More than 60% of 6136 surface plankton net tows collected buoyant plastic pieces typically millimeters in size. The highest concentration of plastic debris was observed in subtropical latitudes and associated with the observed large-scale convergence in surface currents predicted by Ekman dynamics. Despite a rapid increase in plastic production and disposal during this time period, no trend in plastic concentration was observed in the region of highest accumulation…