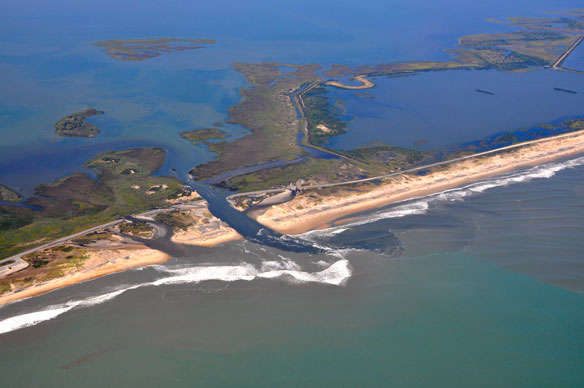 By Rob Young and Andy Coburn, Program for the Study of Developed Shorelines, Western Carolina University

Personnel from the Program for the Study of Developed Shorelines (PSDS) are actively surveying the North Carolina coast following the passage of Hurricane Irene. Center Director Dr. Rob Young completed a surveillance flight of the northern Outer Banks Sunday morning and filed the following brief report of storm impacts:

1) In general the storm did little damage to ocean front property along the northern Outer Banks. Some dune scarping is visible, but storm surge was less then expected. Even so, Hurricane Irene has opened a new inlet just south of the freshwater ponds on Pea Island National Wildlife Refuge on Hatteras Island [Images IreneInlet1-3.jpg] (lat:35.684185, lon:-75.482329). The inlet is not as large as the so-called “Isabel Inlet”, but at flight time there was continued tidal exchange and filling in the inlet will require some time. There is also a small breach of the island just north of Rodanthe (MirloInlet.jpg) in the Mirlo Beach area (lat 35.607286, lon: -75.465431). Maintaining Highway 12 in light of even small storms like Hurricane Irene has become an unending challenge for NCDOT. It certainly makes one wonder about the planned replacement of the Bonner Bridge. Even if we can build an immovable Bridge, will there be a road left to connect to?

2) The $30+ Million beach nourishment project at Nags Head has survived the storm, although there certainly has been some loss of sand along the beach. The degree of loss is difficult to assess “on the fly” from the air. PSDS Associate Director Andy Coburn flew the beach on August 25, two days before the hurricane. Before images of the Nags Head project are currently available at https://picasaweb.google.com/psdspix and after images will be available at psds.shutterfly.com on Monday. In our judgment, Hurricane Irene would not have caused significant damage to any properties, with or without the new beach.

3) The primary impact from Hurricane Irene to the North Carolina Outer Banks was from significant soundside flooding impacting many areas of Duck, Kitty Hawk, Collington Village, Roanoke Island, and others. Much of this water has filled natural swales and dips on the backside of the islands, and will be around for some time.