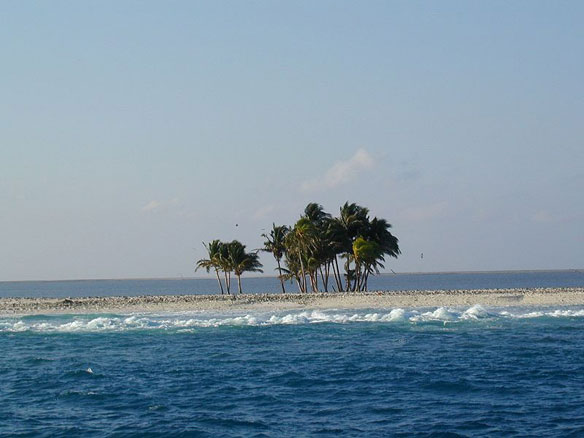 Clipperton Island or, Île de la Passion, is an uninhabited nine-square-kilometre coral atoll in the eastern Pacific Ocean, southwest of Mexico and west of Central America. It is an overseas possession of France under direct authority of the Minister of Overseas France.
Clipperton’s name comes from John Clipperton, an English pirate and privateer who fought the Spanish during the early 18th century, and is said to have passed by the island. Some others say he used the island as a hidden base for his raids on shipping, yet there is no documentary evidence for this.The name Île de la Passion (English: Passion Island) was officially given in 1711 by French discoverers Martin de Chassiron and Michel Du Bocage, commanding the French ships La Princesse and La Découverte, who reached the island, drew the first map, and annexed it to France. Captions: Wikipedia. Photo source: Shannon Rankin, NOAA

Named after British pirate John Clipperton, also known as the “Island of Passion,” Clipperton Island is some 2.3 square miles (six square kilometers) in size, and is unhabitated.

“The Clipperton Project aims to create a new kind of discourse and presentation of climate change, using Clipperton Island as a prism through which this broad theme can be seen,” said Jonathan Bonfliglio, the British project leader, on Monday in Mexico City…