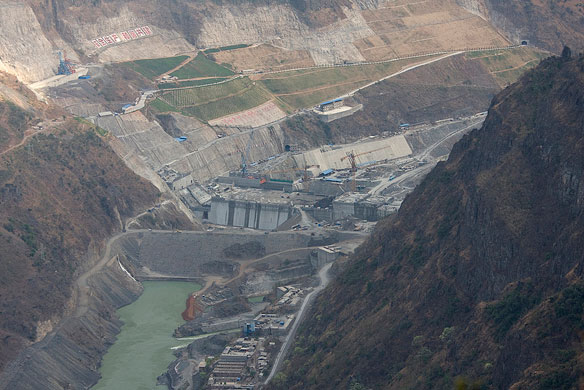 A fresh look at the environmental impacts of dams on an ecologically diverse and partially protected river in China found that small dams can pose a greater threat to ecosystems and natural landscapes than large dams.

Large dams have been considered more harmful than their smaller counterparts.

But researchers’ surveys of habitat loss and damage at several dam sites on the Nu River and its tributaries in Yunnan Province revealed that the environmental effects of small dams are often greater–sometimes by several orders of magnitude–than of large dams.

“That’s one of the main outcomes, to demonstrate that the perceived absence of negative effects from small hydropower is not always correct.”

She and Desiree Tullos, also a water resources engineer at Oregon State, report their findings in a paper accepted for publication in Water Resources Research, a journal of the American Geophysical Union (AGU).

“These researchers have taken advantage of what is essentially a natural experiment that allowed them to compare the effects of hydroelectric dams of different sizes,” said Tom Baerwald of the National Science Foundation’s (NSF) Directorate for Social, Behavioral & Economic Sciences, which co-funded the research with other NSF directorates. “The results are applicable beyond this region.”

To compare the effects of small and large dams, Kibler investigated 31 small dams built on tributaries to China’s Nu River and four large dams proposed for the main stem of the Nu River.

She assessed the environmental effects of these dams in 14 categories–including the area and quality of habitat lost, the length of river channel affected, the amount of conservation land affected, and the landslide risk.

After evaluating data from the field, hydrologic models, and Environmental Impact Assessment reports on the small dams, Kibler and Tullos concluded that effects of the small dams exceeded those of large dams on nine out of the 14 characteristics they studied.

One particularly detrimental effect of the small dams is that they often divert the flow of the river to hydropower stations, leaving several kilometers of river bed dewatered, Kibler said.

From its headwaters in the Tibetan Plateau, the Nu River flows through China, Myanmar (Burma) and Thailand.

“While the number of small hydropower dams in operation or planned for tributaries to the Nu River is unreported,” the authors state in their paper, “our field surveys indicate that nearly one hundred small dams currently exist within Nujiang Prefecture alone.”

Thirteen large hydropower dams are proposed for the mainstem of the Nu River in Tibet and Yunnan Province in China.

In addition to supporting several protected species, the region is home to a large proportion of ethnic minorities and valuable natural resources, the authors report.

The lack of regulation paired with a dearth of communication between small dam projects in China allows for the effects to multiply and accumulate through several dam sites, the authors write.

To mitigate the detrimental effects of small dams, there’s a need for comprehensive planning for low-impact energy development, said Kibler and Tullos.

“The lack of analyses of the cumulative effects of small hydropower,” Kibler said, “is a significant research gap with important policy implications.”

Dams In China, by International Rivers
Dammed, diverted and polluted, China’s rivers are reaching an ecological tipping point. China has more large dams than any other country in the world, including the world’s largest – the Three Gorges Dam. Chinese companies are rapidly exporting their large dam-building model overseas. Chinese banks and companies are involved in constructing some 300 dams in 66 different countries, particularly in Africa and Southeast Asia.