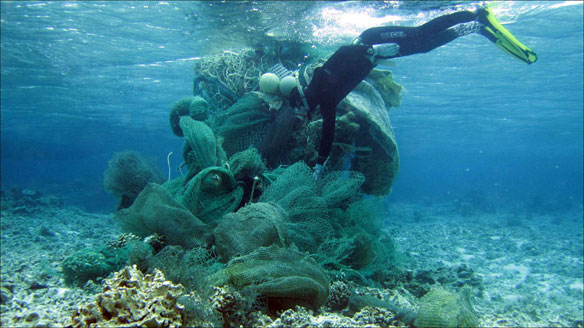 In an area of Hawaii, far removed from most human habitation, a recent cleanup effort yielded an 18-wheeler’s worth of human debris, consisted largely of derelict fishing gear and all sorts of plastic, during a 19-day anti-pollution campaign this year.

The largest single piece of debris removed by the team was a seven-meter-long vessel swept away during the March 2011 Tōhoku earthquake and tsunami in Japan.

The region, which includes Midway Atoll, some 1,200 miles (1,900 kilometers) from the Hawaiian mainland, acts as a “fine-tooth comb” in picking up debris from elsewhere,

Once the debris is picked up, NOAA works to recycle as much of it as possible. Nets, for example, are sent to Schnitzer Steel Hawaii Corp. on the mainland, where they are chopped up for the City and County of Honolulu’s H-Power plant to convert into electricity… 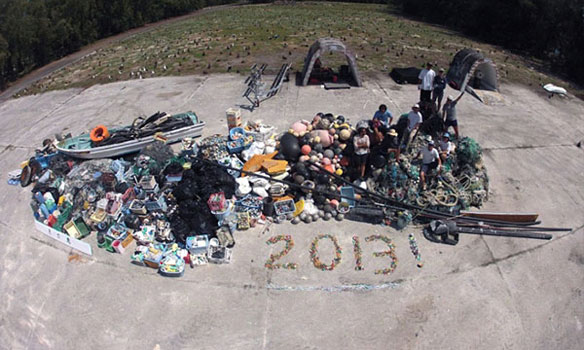 A NOAA team recently collected 14 metric tons of fishing gear, plastic, and other debris from the shoreline and waters around Midway Atoll. The collected debris consisted largely of derelict fishing gear and plastic. Captions and Photo source: NOAA

NOAA Removes ’18-Wheeler’s Worth’ of Debris from Mid-Pacific Waters, NOAA

Message from the Gyre,from the Midway Series; courtesy of © Chris Jordan for Coastal Care