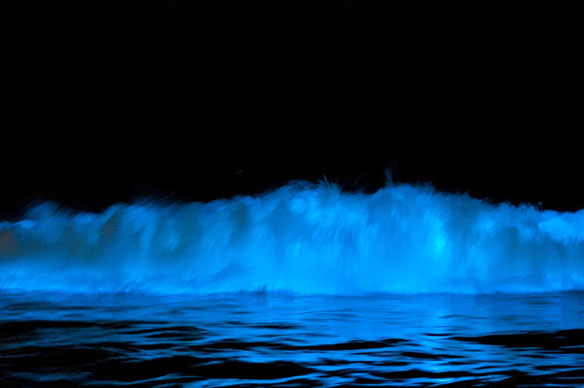 Blooming in the South Atlantic

Offshore from Argentina, spring is in bloom. Massive patches of floating phytoplankton colored the ocean in November 2013. These microscopic, plant-like organisms are the primary producers of the ocean, harnessing sunlight to nourish themselves and to become food for everything from zooplankton to fish to whales.

The Moderate Resolution Imaging Spectroradiometer (MODIS) on NASA’s Terra satellite captured this natural-color image on November 26, 2013. The chalky blue swirls in the South Atlantic Ocean, as well as fainter streaks of yellow and green, are evidence of abundant growth of phytoplankton across hundreds of kilometers of the sea. These organisms contain pigments (such as chlorophyll) or minerals (calcium carbonate) that appear blue, green, white, or other colors depending on the species. The phytoplankton in this image are likely a blend of diatoms, dinoflagellates, and coccolithophores. Near the coast, the discoloration of the water could be phytoplankton or it might be sediment runoff from rivers. 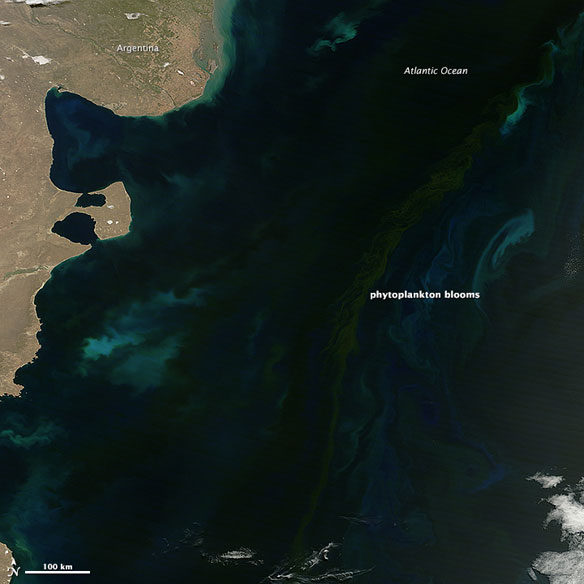 These phytoplankton help fuel one of the world’s best fishing grounds, particularly for shortfin squid, hake, anchovies, whiting, and sardines. The area known as the Patagonian “shelf-break front,” is a crossroads of currents—Circumpolar, Brazil, and Malvinas—where nutrients are carried in from southern waters or churned up from the edge of the continental shelf.

Fish and squid aggregate in high concentrations at the shelfbreak because it is a very productive area for phytoplankton during austral spring and summer, said Marina Marrari, a biological oceanographer with Argentina’s Servicio de Hidrografia Naval (Hydrographic Service). Blooms of phytoplankton have been developing for several weeks, as shown in MODIS images from November 18 and November 9, 2013.

Something Fishy in the Atlantic Night, NASA / Earth Observatory