How Plastic Pollution Can Carry Flame Retardants Into Your Sushi

Even plastics that contain no toxic substances themselves, such as polyethylene—the most widely used plastic, found in packaging and tons of other products—can serve as a medium for poisons to coalesce from the marine environment.

But what happens to these toxin-saturated plastics when they’re eaten by small fish? In a study published today in Scientific Reports, Rochman and colleagues fill in the picture, showing that the toxins readily transfer to small fish through plastics they ingest and cause liver stress. This is an unsettling development, given that we already know such pollutants concentrate further the more you move up the food chain, from these fish to the larger predatory fish that we eat on a regular basis…

Original Study: “Ingested plastic transfers hazardous chemicals to fish and induces hepatic stress,” Nature
Plastic debris litters aquatic habitats globally, the majority of which is microscopic (< 1 mm), and is ingested by a large range of species. Risks associated with such small fragments come from the material itself and from chemical pollutants that sorb to it from surrounding water. Hazards associated with the complex mixture of plastic and accumulated pollutants are largely unknown. Here, we show that fish, exposed to a mixture of polyethylene with chemical pollutants sorbed from the marine environment, bioaccumulate these chemical pollutants and suffer liver toxicity and pathology. Fish fed virgin polyethylene fragments also show signs of stress, although less severe than fish fed marine polyethylene fragments. We provide baseline information regarding the bioaccumulation of chemicals and associated health effects from plastic ingestion in fish and demonstrate that future assessments should consider the complex mixture of the plastic material and their associated chemical pollutants...

How Plastic In The Ocean Is Contaminating Your Seafood, NPR
“The ocean is basically a toilet bowl for all of our chemical pollutants and waste in general,” says Chelsea Rochman, a postdoctoral researcher at the University of California, Davis, who authored the study. “Eventually, we start to see those contaminants high up in the food chain, in seafood and wildlife…”

Plastic Pollution, Coastal Care
Samples of sea sand and seawater collected from Europe, India, Japan and the Pacific Ocean were found to be contaminated, with up to 150 parts per million of some of these components of plastic decomposition.
“Plastics in daily use are generally assumed to be quite stable,” said study lead chemist researcher Katsuhiko Saido, Ph.D., at the 238th National Meeting of the American Chemical Society (ACS) in August 2009:
“We found that plastic in the ocean actually decomposes as it is exposed to the rain and sun and other environmental conditions, giving rise to yet another source of global contamination that will continue into the future.” This latest study clearly shows new micro-pollution by compounds generated by plastic decomposition to be taking place out of sight in the ocean, leaching toxic chemicals such as Bisphenol A (BPA) and derivatives of polystyrene. Even though present in seawater and sands, the pollutants are found in highest concentration in areas heavily littered with plastic debris, such as ocean vortices, which bring us to define more specifically the notion of gyres and “garbage patches”… 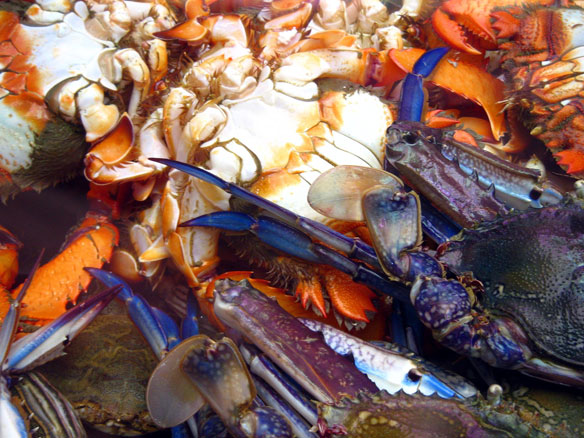