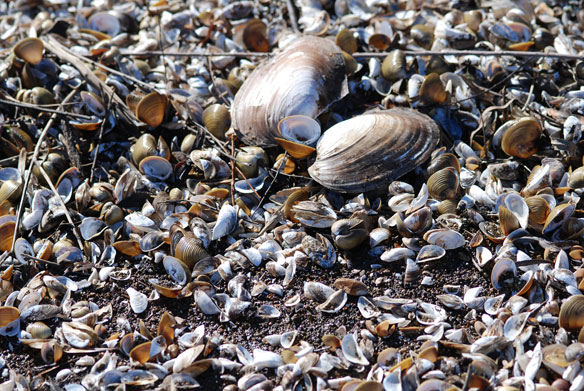 Imperiled Mussels May be Further Harmed by Climate Change

Rising water temperatures as a result of climate change may harm already endangered or threatened native freshwater mussels in North America, according to a new U.S. Geological Survey report.

During laboratory tests, USGS scientists and partners found that the heart and growth rates of some species of young freshwater mussels declined as a result of elevated water temperatures, and many died. Freshwater mussels have been compared to the “canary in the coal mine” in that they are indicators of good water and sediment quality in U.S. rivers. They are also important in the aquatic food web, filter large amounts of water and suspended particles, and serve as food for other organisms. The study is published in the December issue of the journal Freshwater Science.

“Native freshwater mussels may be especially sensitive to climate change because of their patchy distribution, limited mobility, and dependence on host fish for their larval stage, as well as fragmentation of their ranges by habitat alteration,” said Teresa Newton, USGS scientist and an author of the report. “Many species are currently in danger of extinction.”

The scientists studied the effects of high water temperatures, ranging from 20-35 degrees Celsius (68-95 degrees Fahrenheit), on three species of two-month-old freshwater mussels: pink mucket, fat mucket and washboard. Temperatures at which at least 50 percent of the populations died after 28 days ranged from 25.3-30.3 degrees Celsius (about 78-87 degrees Fahrenheit). Heart rates in the pink mucket and washboard mussels declined significantly with increasing water temperature.

The observed effects may ultimately decrease biodiversity and cause a shift to more temperature-tolerant mussel species.

“Freshwater mussels are the most endangered group of organisms in the U.S. and in the world,” Newton said. “More estimates of the upper thermal limits in native mussels are urgently needed to assess the potential effects of global climate change on native mussel populations.”

Over 70 percent of North America’s 302 mussel species are imperiled or extinct. Declines in the abundance and diversity of these mussels have been attributed to a wide array of human activities that cause pollution, water-quality degradation and habitat destruction.

The USGS report is in collaboration with the University of Wisconsin-La Crosse River Studies Center, and is available online…