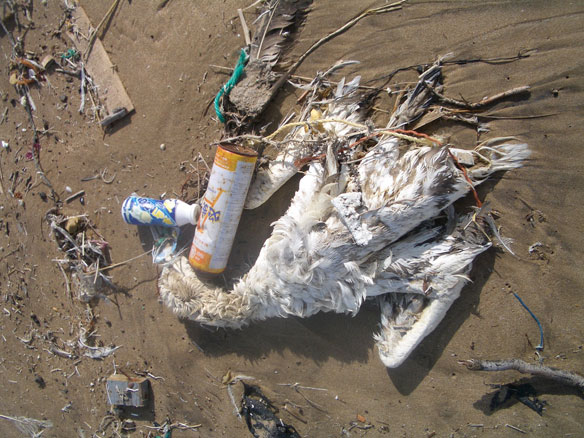 Plastic ingestions affects around 94% of Cory’s shearwaters on the Catalan coast, according to new research.

In the case of Yelkouan shearwaters and Balearic shearwaters, scientists show that 70% of studied birds were affected by plastic ingestion…

Plastic pollution is known to be a threat for marine ecosystems around the world, but it has not been much studied yet. Jacob González Solís explains that “this is the first assessment of plastic ingestion in Mediterranean seabirds. The Mediterranean Sea has been recognized as a singularly sensitive ecosystem because its coast is very industrialized, shipping activity is intense and it contains high density floating plastic areas.”

A Video: Midway Journey II, An Environmental Tragedy Depicted
“Midway Atoll, one of the remotest islands on earth, is a kaleidoscope of geography, culture, human history, and natural wonder. It also serves as a lens into one of the most profound and symbolic environmental tragedies of our time: the deaths by starvation of thousands of albatrosses who mistake floating plastic trash for food…” Five media artists, led by photographer Chris Jordan, traveled to Midway Atoll National Wildlife Refuge to witness the catastrophic effect of our disposable culture on some of the world’s most beautiful and symbolic creatures.

Midway Atoll, Northwestern end of the Hawaiian archipelago
Message from the Gyre is an image by Chris Jordan, from the Midway Series…