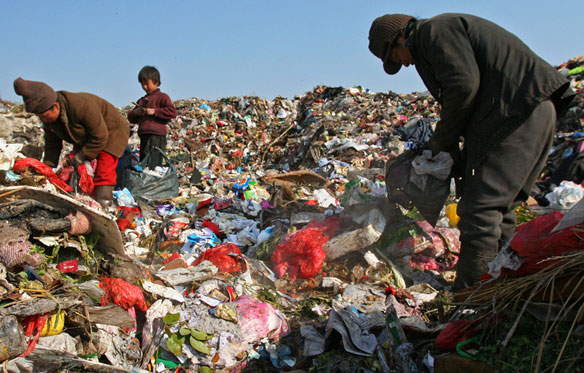 Despite China’s rapid economic development, there remains a marked disparity between the country’s wealthy and underpriviledged population. This family, originally from Guizhou Province (a western China province), moved to the rich Delta Yangtze River coast in search of new opportunities. They currently work in a Jiangsu landfill, sifting through garbage in search of any valuable reselable items. Captions and Photo source: ©© Sheila

In 2010 Adam Minter, Bloomberg’s Shanghai correspondent, visited Wen’an, once at the heart of the global scrap plastic trade. In a never-before published extract from his book, “Junkyard Planet: Travels in the Billion-Dollar Trash Trade,” he describes the effects on workers’ health, and pollution incurred.

In 2013, according to figures from the Bureau of International Recycling, China imported about 8-9m tonnes of plastics scrap. BIR estimates that global plastic scrap consumption will climb from 15m tonnes in 2007 to around 45m tonnes by 2015…

Plastic Pollution, Coastal Care
The unprecedented plastic waste tide plaguing our oceans and shores, can become as limited as our chosen relationship with plastics, which involves a dramatic behavioral change on our part…”