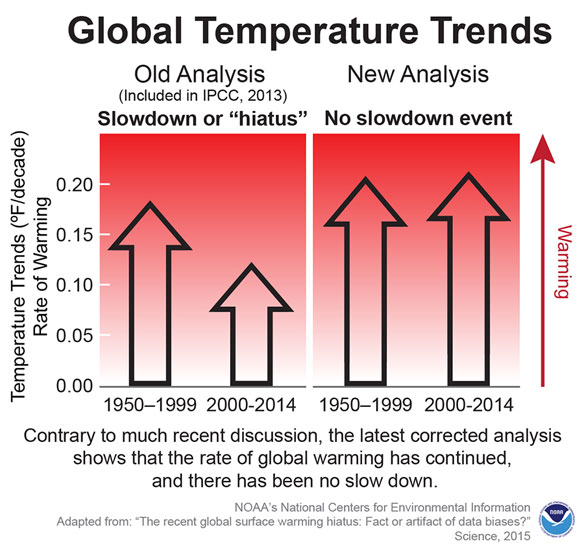 The study is the work of a team of scientists from the National Oceanic and Atmospheric Administration’s (NOAA) National Centers for Environmental Information* (NCEI) using the latest global surface temperature data.

“Adding in the last two years of global surface temperature data and other improvements in the quality of the observed record provide evidence that contradict the notion of a hiatus in recent global warming trends,” said Thomas R. Karl, L.H.D., Director, NOAA’s National Centers for Environmental Information. “Our new analysis suggests that the apparent hiatus may have been largely the result of limitations in past datasets, and that the rate of warming over the first 15 years of this century has, in fact, been as fast or faster than that seen over the last half of the 20th century.”

The apparent observed slowing or decrease in the upward rate of global surface temperature warming has been nicknamed the “hiatus.” The Intergovernmental Panel on Climate Change’s (IPCC) Fifth Assessment Report, released in stages between September 2013 and November 2014, concluded that the upward global surface temperature trend from 1998­­-2012 was markedly lower than the trend from 1951-2012.

Since the release of the IPCC report, NOAA scientists have made significant improvements in the calculation of trends and now use a global surface temperature record that includes the most recent two years of data, 2013 and 2014–the hottest year on record. The calculations also use improved versions of both sea surface temperature and land surface air temperature datasets. One of the most substantial improvements is a correction that accounts for the difference in data collected from buoys and ship-based data.

Prior to the mid-1970s, ships were the predominant way to measure sea surface temperatures, and since then buoys have been used in increasing numbers. Compared to ships, buoys provide measurements of significantly greater accuracy. “In regards to sea surface temperature, scientists have shown that across the board, data collected from buoys are cooler than ship-based data,” said Dr. Thomas C. Peterson, principal scientist at NOAA’s National Centers for Environmental Information and one of the study’s authors. “In order to accurately compare ship measurements and buoy measurements over the long-term, they need to be compatible. Scientists have developed a method to correct the difference between ship and buoy measurements, and we are using this in our trend analysis.”

In addition, more detailed information has been obtained regarding each ship’s observation method. This information was also used to provide improved corrections for changes in the mix of observing methods.

New analyses with these data demonstrate that incomplete spatial coverage also led to underestimates of the true global temperature change previously reported in the 2013 IPCC report. The integration of dozens of data sets has improved spatial coverage over many areas, including the Arctic, where temperatures have been rapidly increasing in recent decades. For example, the release of the International Surface Temperature Initiative databank, integrated with NOAA’s Global Historical Climatology Network-Daily dataset and forty additional historical data sources, has more than doubled the number of weather stations available for analysis.

Lastly, the incorporation of additional years of data, 2013 and 2014, with 2014 being the warmest year on record, has had a notable impact on the temperature assessment. As stated by the IPCC, the “hiatus” period 1998-2012 is short and began with an unusually warm El Niño year. However, over the full period of record, from 1880 to present, the newly calculated warming trend is not substantially different than reported previously (0.68°C / Century (new) vs 0.65°C / Century (old)), reinforcing that the new corrections mainly have in impact in recent decades. 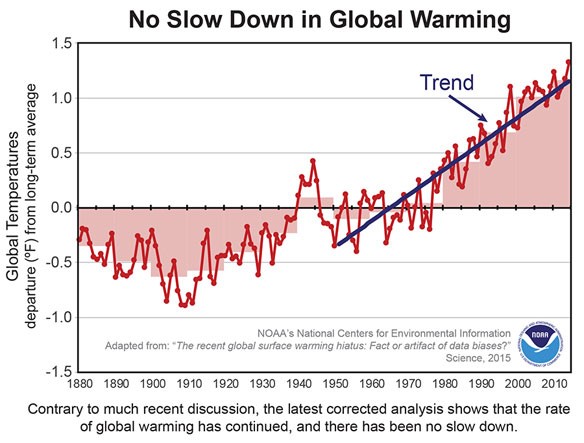