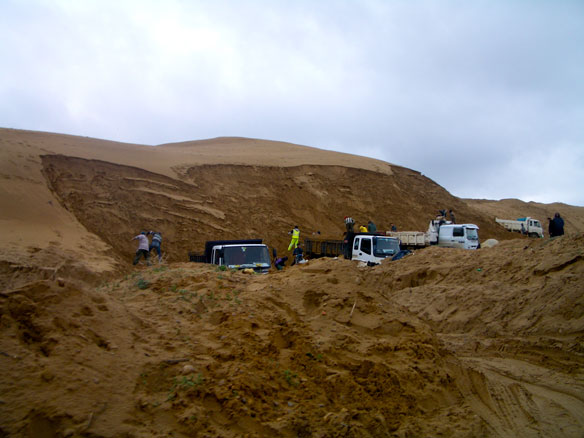 Translation
The number of cases handled increased compared to 2018.

Beyond the direct threat to the littoral, illegal sand mining in Jijel has become a matter of sand mafias. The authorities reported the dismantling of numerous networks as part of the action plan set up to combat this scourge.

In 2019 alone, 34 cases related to illegal sand mining were recorded by the police forces.
These cases, which were 100% investigated, resulted in the arrest of 12 persons, 7 of whom were jailed and 5 of whom were released on bail.The number of cases handled is up from 2018, when 18 cases were reported, of which only 76% were handled.

According to the results of the 2019 operations, the police forces seized equipment used in the extraction and transportation of sand, consisting of 34 trucks, 3 vehicles, 1 tractor, 2 donkeys and 12 motorcycles. Estimated at 2,467 m3, the quantities of sand seized during these interventions represent the equivalent, according to the authorities, of 75 large lorries (20 t) and a value of about 470,000 US dollars (60,000,000 Algerian DA).

The Authorities advocated administrative solutions to effectively combat this scourge, which continues to expand despite the measures taken to eradicate it. Further action by the administration to join them combatting illegal sand mining is also requested. One of these measures has already consisted of the installation of concrete blocks on the beach, to block access to and from the beach for the traffickers’ trucks, as sand is a sought after material which remains in great demand due to the multiplication of construction sites.