“Beach sand: so common, so complex, so perfect for sandcastles; and now it is a precious and vanishing resource.”

Beaches are the most visited natural attraction on the planet. The coast attracts millions of vacationing people each year. People love the sand, the surf, the sea breeze, and the vacation ambiance so much that many come to the beach to stay. There is a magical feeling living near the ocean, but human migration towards the coast comes with a high environmental price tag.

A majority of the world’s population lives within 50 km of the coast and the projections are 75% by the year 2025. This strip of land represents only 3% of the total land mass of the planet. In this context, it is easier to understand the environmental impact. Over 70% of the earth is covered by water and with so many people living on the coast, we are polluting a major source of food, the oceans. 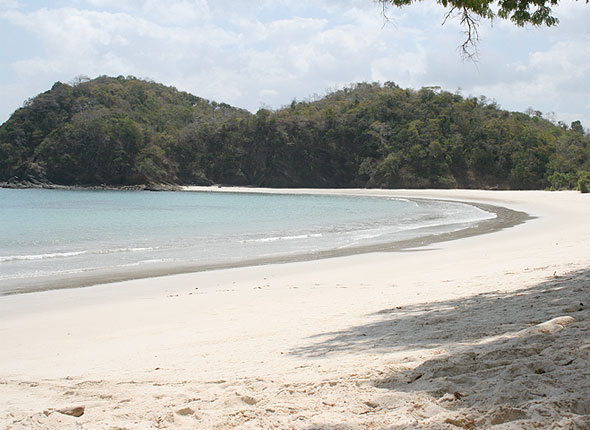 A beautiful undeveloped beach in Indonesia.

Today, the health, beauty, and ecosystem function of the world’s beaches are under threat and the driving causes for most of these problems are over-development and poor coastal management. If no buildings crowded the shoreline there would be no shoreline armoring, beach nourishment, threats to the beach fauna and flora or shoreline erosion problems.

It is important to distinguish between erosion and erosion problems. Erosion refers to the landward retreat of the shoreline. Most of the world’s shorelines are eroding, a very few are building out (accreting). There is no erosion problem, however, until someone builds something next to a shoreline. All over the world in remote areas, shorelines are slowly retreating and no one cares. In a global sense, our continents are slowly shrinking, and in a very real sense, erosion problems are man made. On a high-rise, condo-lined shoreline like those in Spain and the Florida coast, erosion is a huge problem and will only worsen in the future as sea level rise accelerates. Sea level rise will accelerate erosion of the shoreline and have a dramatic impact on our infrastructures, our economies, and our way of life.

Sea level rise is one of the most important causes of global shoreline erosion. If the coastline is developed, shoreline armoring is often used in an effort to save the buildings from the eroding shoreline. Once this begins, the beaches will degrade and eventually be lost. In the long-term, however, these armoring efforts are in vain. The ocean will continue to rise as the rate of sea level rise is expected to increase as the Greenland and Antarctic ice sheets continue to degrade. The situation is made worse now because beach houses and condominiums are being built closer to the ocean than they were 25 years ago. Many of us are familiar with images of large beach houses about to fall victim to the oceans simply from daily erosion accelerated by the ever rising sea.

The work of the Santa Aguila Foundation will emphasize the impacts of sand mining and shoreline armoring: the first because the effects of sand mining have been largely ignored on a global scale and the latter due to its overwhelming negative impacts on the world’s beaches.