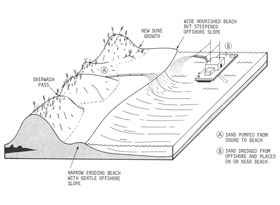 Shoreline engineering is a general phrase that refers to any method of changing or altering the natural shoreline system in order to stabilize it. Methods of stabilizing shorelines range from the simple planting of dune grass to the complex emplacement of large seawalls using draglines, cranes, and bulldozers. The benefits of such methods are usually short-lived. Locally, shoreline engineering may actually cause shoreline retreat, as evidenced by the beach in front of the Carolina Beach seawall. Beach erosion caused by man may be greater and more spectacular than nature’s own.

The ocean-side beaches of North Carolina have fewer engineering mistakes on them than do other states (New Jersey, for example), but this is largely because fewer projects have been carried out; our overall batting average is not too impressive. A few years ago the National Park Service announced that a total of $21 million had been spent to save Outer Banks beaches north and south of Hatteras, but the shoreline continues to retreat. The economic and environmental price of stabilizing the ocean-side beach is stiff indeed. Public awareness of the magnitude of this problem is essential. (There are, of course, situations in which stabilization is an economic necessity. Channels leading to our state ports at Morehead City and Wilmington, for example, must be maintained.)

There are three major ways by which shorelines are stabilized. These methods are listed below, in decreasing order of environmental safety.

If you must repair a beach, this is probably the most gentle approach. Replenishment consists of pumping sand onto the beach and building up the former dunes and upper beach. Sufficient money is never available to replenish the entire beach out to a depth of 40 feet. Thus, only the upper beach is covered with new sand, so that in effect, a steep beach is created (Figure 17). This new steepened profile often increases the rate of erosion. In beach replenishment, sand is either pumped from the lagoon, a pit on the island, or the shelf, but most often from the lagoon. Lagoon sand, however, tends to be too fine; it quickly washes off the beach, as illustrated at Wrightsville Beach. Furthermore, dredging in the lagoon disturbs the ecosystem, and the hole created in the sound affects waves and currents, sometimes harming the back side of the island. In addition, mining the island leaves an unsightly hole of unusable land, as it did near Cape Hatteras in a 1973 replenishment project. Perhaps the best source of sand environmentally, but the most costly, is the continental shelf. However, Dr. Victor Goldsmith of the Virginia Institute of Marine Science warns that when a hole is dug on the shelf for replenishment sand, wave patterns on the adjacent shoreline will likely be affected. Off the Connecticut coast, wave patterns changed by a dredged hole on the shelf quickly caused the replenished beach to disappear. 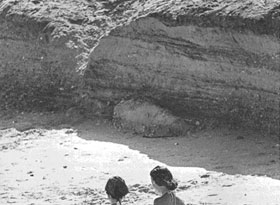 In 1965 one of North Carolina’s most publicized beach replenishment projects was undertaken at Wrightsville Beach. Nearly 3 million cubic yards of sand were pumped onto 14 thousand feet of beach. Parts of the beach were replenished in 1966 and in 1970, but much of that sand was later lost. In the summer of 1976 the City was worried because the beach had become very steep. A bulldozer was used to flatten the beach slope by pushing sand from the artificial dune out onto the beach. By the summer of 1977 the beach was again very steep and a scarp had formed (Figure 18).

The real problem with beach replenishment, however, comes with cost and sand supply. The cost of the Wrightsville Beach project was over $1 million in 1966. The 1972-3 appropriation to the National Park Service for beach replenishment in the Cape Hatteras-Buxton area was $4.3 million.

Groins and jetties are walls built perpendicular to the shoreline. A jetty, often very long (sometimes miles), is intended to keep sand from flowing into a ship channel. Groins, much smaller walls built on straight stretches of beach away from channels and inlets, are intended to trap sand flowing in the longshore (surf-zone) current. There are groins present today on many North Carolina beaches, including Cape Hatteras, Cape Lookout, Bogue Banks, Kure Beach, Fort Fisher, and Yaupon Beach. Groins can be made of wood, stone, concrete, steel, or (increasingly in North Carolina) nylon bags filled with sand. Nylon-bag groins are also common in areas where beaches and property are threatened by inlet migration. The ends of Topsail Beach, Bogue Banks, and Long Beach are examples of such areas. 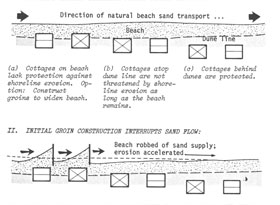 Figure 19 Evolution of a Groined Shoreline

Both groins and jetties are very successful sand traps. If a groin is working correctly, more sand should be piled up on one side of it than on the other. The problem with the groin is that it traps sand that is probably flowing to a neighboring beach. Thus, if a groin on one beach is functioning well, it must be causing erosion elsewhere by “starving” another beach (Figure 19).

Miami Beach, Florida, illustrates the results of groin usage. After one was built, countless others had to be constructed-in self defense. Prior to the 1977 beach-renourishment project, Miami Beach looked like an Army obstacle course; groins obstructed both pedestrian and vehicular traffic. Groins and other forms of shoreline engineering destroyed Miami Beach. Now, only through an eternal commitment to beach renourishment can the artificial beach be maintained.

Seawalls, built back from and parallel to the shoreline, are designed to receive at least once the full impact of the sea during a tidal cycle. Present in almost every highly developed coastal area, seawalls are fairly common along the North Carolina coast. A more common type of structure in North Carolina is the bulkhead, a type of seawall placed farther from the shoreline in front of the first dune-or what was the first dune-and designed to take the impact of storm waves only. Building a seawall or bulkhead is a very drastic measure on the ocean-side beach, harming the environment in the following ways: 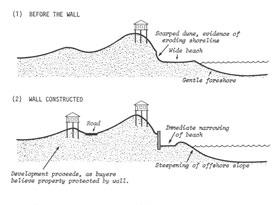 Figure 20 Saga of a Seawall

The emplacement of a seawall is an irreversible act with limited benefits. By gradually removing the beach in front of it, every seawall must eventually be replaced with a bigger (“better”), more expensive one. While a seawall may extend the lives of beach-front structures in normal weather, it cannot protect those on a low-lying barrier island from the havoc wrought by hurricanes; it cannot prevent overwash or storm-surge flooding.

The long-range effect of seawalls can be seen in New Jersey and Miami Beach. In Monmouth Beach, New Jersey, the town building inspector told of the town’s seawall history. Pointing to a seawall he said, “There were once houses and even farms in front of that wall. First we built small seawalls and they were destroyed by the storms that seemed to get bigger and bigger. Now we have come to this huge wall which we hope will hold.” The wall he spoke of, adjacent to the highway, was high enough to prevent even a glimpse of the sea beyond. There was no beach in front of it, but remnants of old seawalls, groins, and bulkheads for hundreds of yards at sea.

A Philosophy of Shoreline Conservation:
“We have met the enemy and he is us.”

In 1801, Postmaster Ellis Hughes of Cape May, New Jersey, placed the following advertisement in the Philadelphia Aurora:

The subscriber has prepared himself for entertaining company who uses sea bathing and he is accommodated with extensive house room with fish, oysters, crabs, and good liquors. Care will be taken of gentlemen’s horses. Carriages may be driven along the margin of the ocean for miles and the wheels will scarcely make an impression upon the sand. The slope of the shore is so regular that persons may wade a great distance. It is the most delightful spot that citizens can go in the hot season.

This was the first beach advertisement in America and sparked the beginning of the American rush to the shore.

In the next 75 years, six Presidents vacationed at Cape May. At the time of the Civil War it was certainly the country’s most prestigious beach resort. The resort’s prestige continued into the 20th century. In 1908, Henry Ford raced his newest model cars on Cape May beaches. 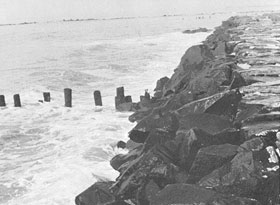 Today, Cape May is no longer found on anyone’s list of great beach resorts. The problem is not that the resort is too old-fashioned, but that no beach remains on the cape (Figure 21).

The following excerpts are quoted from a grant application to the federal government from Cape May City. It was written by city officials in an attempt to get funds to build groins to “save the beaches.” Though it is possible that its pessimistic tone was exaggerated to enhance the chances of receiving funds, its point was clear:

Our community is nearly financially insolvent. The economic consequences for beach erosion are depriving all our people of much needed municipal services …. The residents of one area of town, Frog Hollow, live in constant fear. The Frog Hollow area is a 12 block segment of the town which becomes submerged when the tide is merely 1 to 2 feet above normal. The principal reason is that there is no beach fronting on this area… Maps show that blocks have been lost, a boardwalk that has been lost…. The stone wall, one mile long, which we erected along the ocean front only five years ago has already begun to crumble from the pounding of the waves since there is little or no beach…. We have finally reached a point where we no longer have beaches to erode.

North Carolina will not have to wait a century and a half for this crisis to reach her shores. The pressure to develop is here and increasing. Like the original Cape May resort, our structures are not placed far back from the shore; nor have we been so prudent as to place structures behind dunes or on high ground. Consequently, North Carolina’s coastal development is no less vulnerable to the rising sea than was Cape May’s, and no shoreline engineering device will prevent its ultimate destruction. The solution lies in recognizing certain “truths” about the shoreline.

Truths Of The Shoreline

Cape May is the country’s oldest shoreline resort. Built on a shoreline that migrates much like North Carolina’s, it is a classic example of the poorly developed American shoreline, and one from which North Carolina can learn.

From examples of Cape May and other shoreline areas, certain generalizations or “universal truths” about the shoreline emerge quite clearly. These truths are equally evident to scientists who have studied the shoreline and old-timers who have lived there all of their lives. As aids to safe and aesthetically pleasing shoreline development, they should be the fundamental basis of planning on any barrier island. 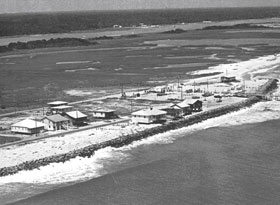 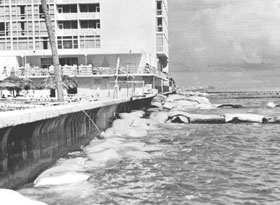 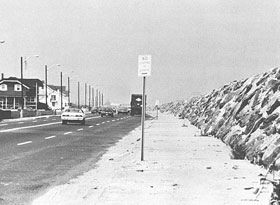