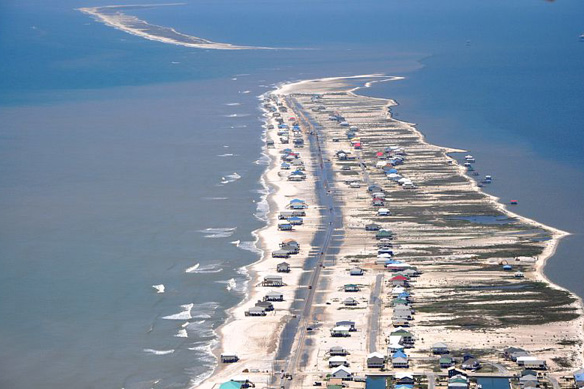 We took off from Pensacola, FL at approximately 12:12 on Tuesday, May 4 and flew over Dauphin Island, the islands of the Gulf Island National Seashore, the Chandeleur Islands (LA) and the mainland Mississippi Gulf coast.

Although we did not observe oil on any beaches, marshes or islands, we did fly over the northern edge of the slick at N29 50.639 W89 06.633, or about 17 miles due west of the Chandeleur Islands. We also observed numerous locations where booms have been deployed, including a metal barricade along the backside of Dauphin island filled with a biochemical agent intended to solidify any oil with which it comes in contact (see image at top of page).

Also on Dauphin Island, private contractors were building a massive sand berm along the Gulf-facing shore on the western half of the island that will eventually stretch for miles. Although the publicly-stated purpose of this berm is to prevent oil from flowing onto the island, one can not help but wonder if this is another attempt to get taxpayers to artificially stabilize the nation’s most hazardous barrier island.