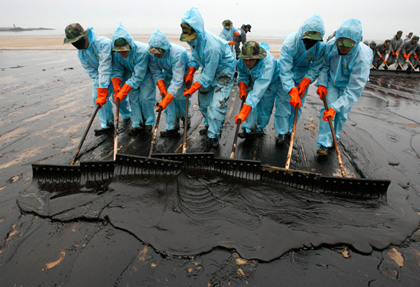 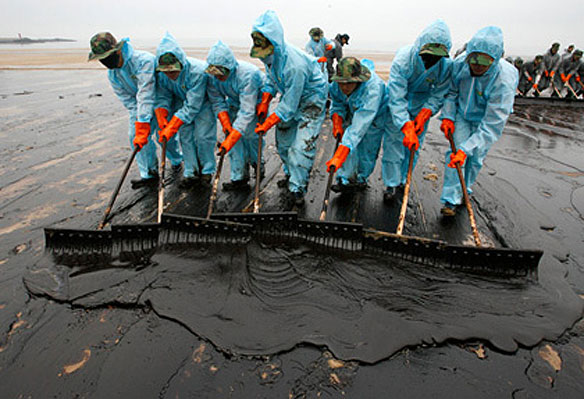 The Obama administration scrambled to respond on Sunday after the failure of the latest effort to kill the gushing oil well in the Gulf of Mexico. But administration officials acknowledged the possibility that tens of thousands of barrels of oil might continue pouring out until August, when two relief wells are scheduled to be completed.

“We are prepared for the worst,” said Carol M. Browner, President Obama’s climate change and energy policy adviser. “We have been prepared from the beginning.”

Even as the White House sought to demonstrate that it was taking a more direct hand in trying to solve the problem, senior officials acknowledged that the new technique BP will use to try to cap the leak — severing the riser pipe and placing a containment dome over the cut riser — could temporarily result in as much as 20 percent more oil flowing into the water during the three days to a week before the new device could be in place.

“This is obviously a difficult situation,” Ms. Browner said on NBC’s “Meet the Press” on Sunday, “but it’s important for people to understand that from the beginning, the government has been in charge.”

“We have been directing BP to take important steps,” including the drilling of a second relief well, she added.

The White House said that Interior Secretary Ken Salazar would make his eighth trip to the region and that the number of government and contract employees sent to work in areas affected by the spill would be tripled.

But despite the White House efforts, the criticism also intensified. Colin L. Powell, who served as secretary of state and chairman of the Joint Chiefs of Staff, told ABC’s “This Week” that the administration must move in quickly with “decisive force and demonstrate that it’s doing everything that it can do.”

Gov. Bobby Jindal of Louisiana, appearing on “Meet the Press,” again criticized the administration’s efforts, saying: “We need our federal government exactly for this kind of crisis. I think there could have been a greater sense of urgency.”

The administration has left to BP most decisions about how to move forward with efforts to contain the leak. But Ms. Browner made a point of saying that the administration, led by Secretary of Energy Steven Chu, had told BP that the company should stop the top kill. Government officials thought it was too dangerous to keep pumping drilling mud into the well because they worried it was putting too much pressure on it. BP announced Saturday evening that it was ending that effort.

BP engineers are now working on several containment plans, with the first being implemented over the next few days.

“According to BP, the riser cutting will likely start Monday or Tuesday,” the White House press secretary, Robert Gibbs, said in a statement on Sunday.

Using submarine robots, technicians intend to sever the riser pipe on top of the blowout preventer, the five-story-high stack of pipes above the well that failed to shut off the leak when the Deepwater Horizon rig exploded on April 20, killing 11 workers. A funnel-like containment device will be fitted above the cut riser to draw the escaping oil through tubing attached to a drilling ship.

But BP officials acknowledged that there was no certainty that this attempt would work. Robert Dudley, BP’s managing director, appearing on “This Week,” also said that if it did work, some oil would still seep out until relief wells provided “an end point” in August.

The failure of the most recent effort — known as a top kill, which BP officials expressed great optimism about before trying it — has underlined the gaps in knowledge and science about the spill and its potential remedies. Ever since the explosion and the resulting leak, estimates of how much oil is escaping have differed by thousands of barrels a day. Both government and BP officials said on Sunday that they had no accurate idea of how much oil was spilling into the gulf.

“We honestly do not know,” Mr. Dudley said on “Meet the Press.” “We’ve always found this a difficult oil to measure because of the huge amounts of gas in the oil.”

“The one thing about this method that we’re about to go into — it will and should measure the majority of the flow,” he said.

Mr. Dudley said that the original estimates by the government and BP officials of 5,000 barrels a day were based on satellite pictures and that the current estimate of 12,000 to 19,000 barrels was “issued without an actual flow measurement.” If the leak is not contained or slowed and continues at the higher estimated flow rate of 19,000 barrels a day until Aug. 20 — four months after the accident — it could amount to close to 2.3 million barrels spilled into the gulf.

After more than a month of diagnostic tests and the pumping of tens of thousands of barrels of drilling fluids — and everything from golf balls to shards of rubber — into the broken blowout preventer, engineers are still debating about what they think may be the inner contours of the five-story stack of pipes and how to best contain its leaking gashes.

In the end, all the mysteries of what went wrong and caused one of the greatest environmental calamities of history may not be known until the well is finally killed and the ill-fated blowout preventer is brought up from the bottom of the sea.

The final plugging of the well will have to wait until August, when the two relief wells are scheduled be completed. Those wells are being drilled diagonally to intersect with the runaway well and inject it with heavy liquids and cement. Work could be slowed by storms in what is expected to be an active summer hurricane season.

Officials from BP and the administration announced on Saturday that the top kill was a failure and had been abandoned, and that engineers were once again trying to solve the problem with a containment cap. A similar operation was tried nearly four weeks ago, but it failed because a slush of icy water and gas, known as hydrates, filled the large containment device, blocking the escaping oil from entering it. This time, engineers will pump hot sea water around the new, smaller device to keep hydrates from forming, and there will be far less space between the cap and the well for any hydrates that do form to flow in.

BP officials expressed optimism on Sunday about the new operation, though one technician working on the project warned that there were concerns that hydrates could again stymie the containment effort. The technician and outside experts also warned that by cutting the riser, the engineers may increase the flow of escaping oil.

Donald Van Nieuwenhuise, director of petroleum geoscience programs at the University of Houston, said that he thought BP’s next plan had a good chance of succeeding, but that there was also a risk of increasing the flow of escaping oil by 10 percent.

“Then it just makes the situation worse for longer,” he said, unless the containment cap succeeds in collecting a substantial amount of oil.