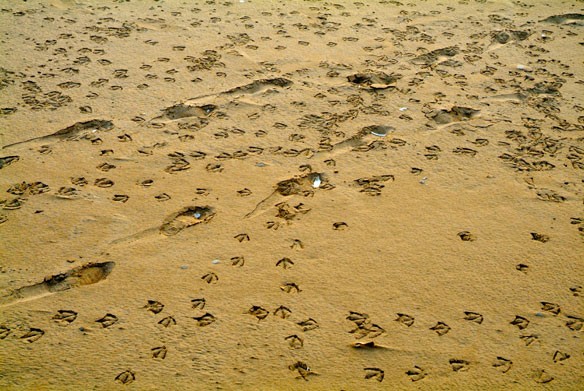 Every few days, in some places as often as twice a day, tractors roll along a hundred miles or so of sandy beaches in southern California, scooping up not only trash but also seaweed that’s washed ashore, along with the myriad small creatures that shelter in it. This mechanical “beach grooming”, practiced for decades, helps keep up the classic sand-and-surf image that draws millions of people to the region’s beaches, but it also sweeps away a resource that provides vital nourishment for shorebirds.

“Grooming sandy beaches changes rich coastal habitats into barren plains of unstable sand,” says Jenifer Dugan of the Marine Science Institute at the University of California, Santa Barbara, whose team has surveyed over 40 beaches, both those that are regularly groomed and beaches where beach wrack, kelps and seagrasses brought ashore by waves and tides, is left in place. Their ongoing studies since 1995, funded by California Sea Grant, California State Parks, Minerals Management Service, and the National Science Foundation, have found far fewer creatures and far lower diversity of life on beaches that are regularly cleaned by “sanitizer” tractors.

On beaches where wrack was left undisturbed, “Our surveys have found a very high abundance and diversity of intertidal life compared to similar beaches in other parts of the world,” Dugan says…