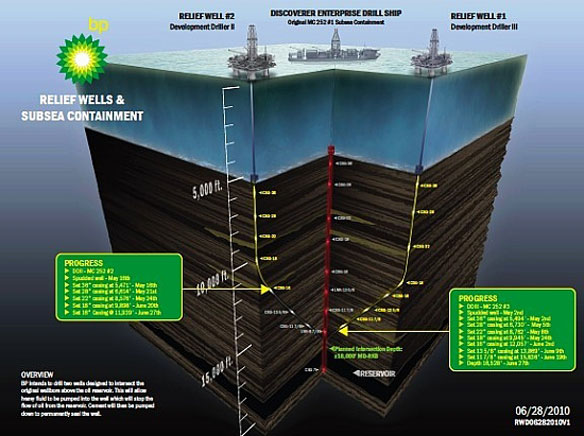 The government’s point man on the Gulf oil spill said today, he is no longer giving a timeline for completing the final stages of plugging BP’s runaway well.

Retired Coast Guard Adm. Thad Allen told reporters that he will give the order to complete the so-called relief well when he is ready.

Since nearly the start of the disaster in April, the plan had been to complete a relief well by early to mid-August. But stormy weather and now questions of how to mitigate risks have delayed that timeline.

Allen said BP PLC still needs to come up with a plan to alleviate pressure that may build up once the relief well intersects the runaway well.

Ultimately, the plan is to pump mud and cement into the runaway well from the bottom to plug it permanently.

Allen said he doesn’t want to give timelines anymore because if he has to change them, that could cause a credibility problem.

“We will know when we have satisfied ourselves and we have removed any shadow of doubt,” Allen said when asked at what point he would give the order to move forward. He said the pause is “nothing more than an overabundance of caution and doing our jobs.”

The two options for relieving pressure are either to design a mechanism to attach to the current blowout preventer and temporary cap that has been preventing oil from entering the Gulf since mid-July, or to replace the existing blowout preventer with a new one first and then proceeding with the relief well.

John Wright, who has been leading the team drilling the relief well aboard a rig at the wellsite, said he also has not been given an exact timetable.

“I was told they are working through risk and contingency plans and would let me know when they were ready to start again,” Wright said in an e-mail to The Associated Press from aboard the Development Driller III vessel.

Also Wednesday, National Oceanic and Atmospheric Administration chief Jane Lubchenco responded to warnings from independent researchers who insist that the oil spill is a bigger mess than the government claims and that a lot of crude is lurking deep below the surface.

At the White House on Aug. 4, Lubchenco said that about 74 percent of the oil had been captured, burned, skimmed, evaporated, dissolved or dispersed. She asserted that the remaining 26 percent of the oil was on or just below the surface, had washed ashore or been collected from the shore, or was buried in sand and sediments.

That’s not what the scientists from South Florida and Georgia found. They said that the oil is not gone and it has to be dealt with.
Lubchenco told reporters Wednesday that she stands by the conclusions in the government’s report.

But, she added, “We know that oil is out there. It is diluted. Dilute and dispersed does not mean benign.”