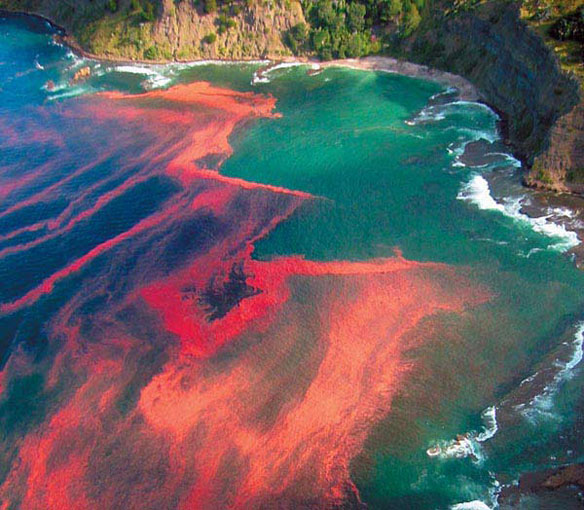 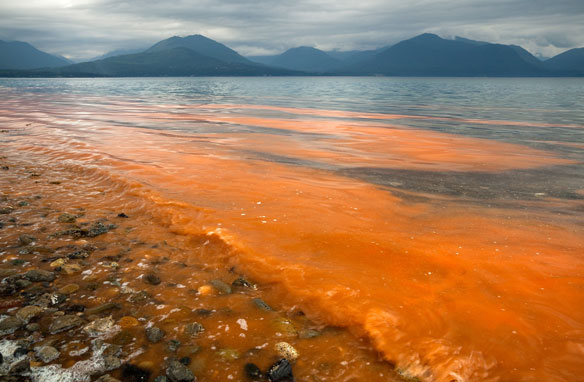 The Coast Guard says a nearly 10-mile-long ribbon of red tide has been spotted in New York Harbor.

The agency says the outbreak of potentially harmful algae was reported early Monday and confirmed by the New Jersey Department of Environmental Protection. DEP representatives didn’t immediately respond to telephone and e-mail messages on the Labor Day holiday.

Authorities say swimmers and boaters should avoid contact with the reddish-brown sheen. It stretches from about the site of the Intrepid Sea, Air & Space Museum off Manhattan to Hoffman Island, off Staten Island.

Red tide is caused by naturally occurring algae that produce a toxin. It can cause temporary breathing trouble and other problems if people ingest it and can make shellfish unsafe to eat.

A “red tide” is a common term used for a harmful algal bloom.

Harmful algal blooms, or HABs, occur when colonies of algae, simple ocean plants that live in the sea, grow out of control while producing toxic or harmful effects on people, fish, shellfish, marine mammals and birds. The human illnesses caused by HABs, though rare, can be debilitating or even fatal.

While many people call these blooms red tides, scientists prefer the term harmful algal bloom. One of the best known HABs in the nation occurs nearly every summer along Florida’s Gulf Coast. This bloom, like many HABs, is caused by microscopic algae that produce toxins that kill fish and make shellfish dangerous to eat. The toxins may also make the surrounding air difficult to breathe. As the name suggests, the bloom of algae often turns the water red.

HABs have been reported in almost every U.S. coastal state, and their occurrence may be on the rise. HABs are a national concern because they affect not only the health of people and marine ecosystems, but also the ‘health’ of local and regional economies.

But not all algal blooms are harmful. Most blooms, in fact, are beneficial because the tiny plants are food for animals in the ocean. In fact, they are the major source of energy that fuels the ocean food web.

A small percentage of algae, however, produce powerful toxins that can kill fish, shellfish, mammals and birds, and may directly or indirectly cause illness in people. HABs also include blooms of non-toxic species that have harmful effects on marine ecosystems. For example, when masses of algae die and decompose, the decaying process can deplete oxygen in the water, causing the water to become so low in oxygen that animals either leave the area or die.

Scientists at the National Ocean Service have been monitoring and studying this phenomenon for a number of years to determine how to detect and forecast the location of the blooms. The goal is to give communities advance warnings so they can adequately plan for and deal with the adverse environmental and health affects associated with these ‘red-tide’ events.

In work that could one day help prevent millions of dollars in economic losses for seaside communities, MIT chemists have demonstrated how tiny marine organisms likely produce the red tide toxin that periodically shuts down U.S. beaches and shellfish beds.

Understanding how and why red tides occur could help scientists figure out how to prevent the blooms, which cause significant ecological and economic damage. The New England shellfish industry, for example, lost tens of millions of dollars during a 2005 outbreak, and red tide killed 30 endangered manatees off the coast of Florida this spring.

The discovery by MIT Associate Professor Timothy Jamison and graduate student Ivan Vilotijevic not only could shed light on how algae known as dinoflagellates generate red tides, but could also help speed up efforts to develop cystic fibrosis drugs from a compound closely related to the toxin. Red tides, also known as algal blooms, strike unpredictably and poison shellfish, making them dangerous for humans to eat. It is unknown what causes dinoflagellates to produce the red tide toxins, but it may be a defense mechanism, possibly provoked by changes in the tides, temperature shifts or other environmental stresses.

One of the primary toxic components of red tide is brevetoxin, a large and complex molecule that is very difficult to synthesize.

Twenty-two years ago, chemist Koji Nakanishi of Columbia University proposed a cascade, or series of chemical steps, that dinoflagellates could use to produce brevetoxin and other red tide toxins. However, chemists have been unable to demonstrate such a cascade in the laboratory, and many came to believe that the “Nakanishi Hypothesis” would never be proven.

“A lot of people thought that this type of cascade may be impossible,” said Jamison. “Because Nakanishi’s hypothesis accounts for so much of the complexity in these toxins, it makes a lot of sense, but there hasn’t really been any evidence for it since it was first proposed.”

Jamison and Vilotijevic’s work offers the first evidence that Nakanishi’s hypothesis is feasible. Their work could also help accelerate drug discovery efforts. Brevenal, another dinoflagellate product related to the red tide toxins, has shown potential as a powerful treatment for cystic fibrosis (CF). It can also protect against the effects of the toxins.

“Now that we can make these complex molecules quickly, we can hopefully facilitate the search for even better protective agents and even more effective CF therapies,” said Jamison.

The new synthesis depends on two critical factors-giving the reaction a jump start and conducting the reaction in water.
Many red tide toxins possess a long chain of six-membered rings. However, the starting materials for the cascades, epoxy alcohols, tend to form five-membered rings. To overcome that, the researchers attached a “template” six-membered ring to one end of the epoxy alcohol. That simple step effectively launches the cascade of reactions that leads to the toxin chain, known as a ladder polyether.

“The trick is to give it a little push in the right direction and get it running smoothly,” said Jamison.

The researchers speculate that in dinoflagellates, the initial jump start is provided by an enzyme instead of a template.
Conducting the reaction in water is also key to a successful synthesis. Water is normally considered a poor solvent for organic reactions, so most laboratory reactions are performed in organic solvents. However, when Vilotijevic introduced water into the reaction, he noticed that it proceeded much more quickly and selectively.

Although it could be a coincidence that these cascades work best in water and that dinoflagellates are marine organisms, water may nevertheless be directly involved in the biosynthesis of the toxins or emulating an important part of it, said Jamison. Because of this result, the researchers now believe that organic chemists should routinely try certain reactions in water as well as organic solvents.

“Red tide is a chronic problem in the Gulf of Maine, and states have limited resources to handle it,” said Darcie Couture, director of Biotoxin Monitoring for the Maine Department of Marine Resources. “When we get this information about the potential severity of a red tide season, and the dynamics of the bloom once the season has started, it gives us an advantage in staging our resources during an otherwise overwhelming environmental and economic crisis.”