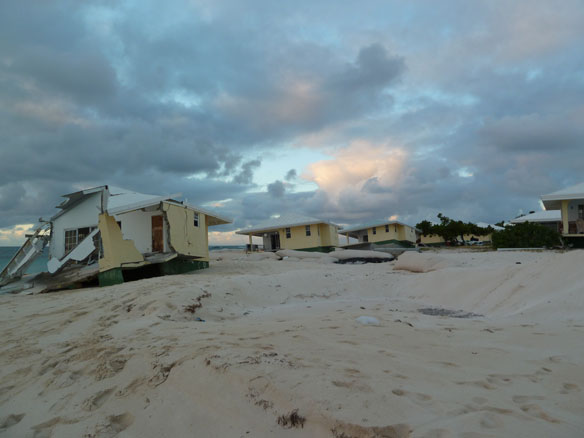 Of all the various anticipated impacts of global climate change, sea level rise will likely be the first to produce a human catastrophe on a global scale.

Of all the various anticipated impacts of global climate change, sea level rise will likely be the first to produce a human catastrophe on a global scale. Heavily populated low-lying lands on deltas (e.g., The Ganges-Brahmaputra Delta) will be abandoned, displacing millions of people. Atoll nations in the Pacific (Tuvalu) and Indian Oceans (The Maldives) will disappear; major cities (Miami, Rotterdam, New York/Newark) will be building storm gates and abandoning the low-lying city fringes. Barrier islands lined with tourist facilities and high-rise buildings along the world’s coastal plains will either be abandoned or will be completely surrounded by massive sea walls. Development-lined beaches everywhere will be degraded and more than likely will be destroyed.

Sea level change is actually a combination of the change in the volume of the sea (eustatic change) and the local up and down movement of the land (tectonic change). The rise is primarily occurring because the ocean water is expanding (thermal expansion). As the warming atmosphere transfers heat to the surface waters of the oceans, the waters gradually expand. The upper 2000 feet of the oceans are involved in this process and even though the amount of expansion per unit volume of sea water is slight, the huge quantity of water expanding in the oceans leads to a significant increase in the volume of the sea and hence to a rise in the level of the sea.

Even if we reversed global warming today, thermal expansion of the oceans would continue for centuries and probably millennia to come. This is because the downward motion of water warmed by contact with the warming atmosphere into deeper waters provides momentum like the momentum furnished to an engine by a flywheel. As the cold deep water is thus warmed it expands. At the same time, the loss of the warm water at shallower depths causes the water column there to shrink. The expansion at depth is greater than the contraction in shallow water so overall the ocean expands and the sea level continues to rise and will do so for a long time.

Currently sea level is rising at a rate of between one and 1-½ feet per century. In order of present-day importance, thermal expansion still leads the way, providing perhaps more than 60% of today’s sea level rise, followed by the melting ice from Greenland and West Antarctica and the melting of mountain glaciers. The East Antarctic Ice sheet is not contributing much melt-water now but is expected to do so within a few years.

If all the mountain glaciers in the world melted today, the sea level would rise between 1 and 2 feet (all the glaciers in Alaska could contribute about 1 ½ inches). Greenland has a potential of about 20 feet of sea level rise, West Antarctica could contribute 16 feet if it all melted, and the combined melting of all of the world’s ice, including the huge East Antarctica ice sheet would provide a new shoreline at an elevation of 220 feet, completely submerging most of the world’s coastal cities!

Tectonic sea level change is local in its impact. If the land is sinking, sea level rise is enhanced. If the land is rising, sea level rise is reduced and may even be reversed. Sea level is dropping in Juneau, Alaska, because the Mendenhall Glacier has retreated away from the coast and the land is rebounding, having been released from the glacier’s weight. This is a widespread phenomenon in high latitudes in the Northern Hemisphere (e.g., Scandinavia) where the ice sheets of the last ice age have recently (in a geologic time sense) melted away. It is also happening in Greenland and the Antarctic where the land beneath the ice rebounds upward as the weight of the thinning glaciers decreases.

On the other hand, sea level is rising with unusual rapidity on most river deltas. On the Mississippi Delta, 4 feet per century rise rates are common and in an extreme case, the sea level is rising as much as 30 feet per century at the river mouths of the Nile Delta. In both of these cases, upstream sediment-trapping dams have removed the normal river-borne sediment load that used to come to the deltas. Adding to the high sea level rise rate on many deltas is natural compaction of the muddy sediment and unnatural subsidence due to the extraction of water and oil. On the Pacific Coast of Colombia, sea level is rising at a rate of 10 feet per century at some locations but not because of petroleum extraction or a loss of sediment. The tectonic forces that are actively building up the nearby northern Andes mountain range are responsible. As the mountains rise, the coast sinks. In Colombia, the sea level rise seems to occur in instantaneous 2 or 3 foot spurts that occur simultaneously with earthquakes.

Predicting the future of sea level rise is a most difficult task. In fact the Intergovernmental Panel on Climate Change (IPCC) threw up their hands on this issue and in 2007 issued only a partial prediction. The panel said that sea level could be expected to rise 11 to 23 inches by the year 2100 but this number, they pointed out, included mainly thermal expansion and did not include the meltwater contribution from the great ice sheets. Unfortunately, many groups have mistakenly assumed the 11-to-23-inch prediction to be the total anticipated sea level rise. The IPCC is a committee of 2000 plus scientists, which perhaps explains the fuzzy wording of the sea level rise prediction that has led to widespread misinterpretation.

Panels from various states and nations have since filled in the predictive gap and come up with their own predictions. Almost all of the science panels agree that we can expect a minimum sea level rise of 3 feet or 1 meter by the year 2100. Hal Wanless of the University of Miami, chair of the Miami-Dade county sea level rise panel, believes that a 5 to 6 foot sea level rise should be expected by 2100. Rob Young and I, in our book The Rising Sea, argue that prudent planners should assume a sea level rise of 7 feet. Among other reasons for this opinion is the fact that life does not end in 2100!

The coastal areas that will be most impacted by a 3 to 5 foot (or more) sea level rise are low elevation, gently sloping coastal zones such as the major river deltas (e.g., the Nile, Mississippi, Mekong, Yangtze, Irawaddy, Ganges and Niger deltas) and the world’s coastal plains (e.g., those of the United States, Brazil and China). Low-lying and dynamic barrier islands line 10% of the world’s open ocean shorelines, mostly along coastal plains.

So what does a 3-to-5 foot sea level rise mean for society and for the beaches If no humans existed along the shorelines of the oceans, the sea level rise would do little to the beaches except move them in a landward direction. No buildings, no erosion problem. The problems arise when we build next to the shoreline as we have all over the world and then we try to hold back the sea to protect our buildings. Inevitably, holding the shoreline in place will lead to the degradation of the world’s beaches and in many cases their complete loss.

Yet in the December 27, 2010, issue of Forbes magazine is an article that argues sea level is not rising. Swedish geologist, Nils Axel Mörner has written a pamphlet entitled Sea Level Rise is the Greatest Lie Ever Told. These and many other expressions of skepticism about sea level rise are part of a larger deniers movement largely funded by energy companies and libertarian organizations. It’s hard to fathom how a 150-year record of tide gauges and 19 years of satellite measurements of sea level change can reasonably be refuted.

Future rates of shoreline retreat cannot be predicted with any accuracy. If the sea level were to rise 6 feet in the next year we could with some assurance place the new shoreline at the 6-foot contour line on local maps. But in the real world, rising water is occurring at a fraction of an inch per year, meaning that much more than the slope of the land will be involved in determining the erosion rate. For example, the nature of the underlying geologic formations and the frequency and size of storms will play important roles. There is a mathematical model known as the Bruun Rule which is purported to predict the amount of shoreline retreat that a given sea level rise will cause. It is a rule so flawed that it does not even take into account the slope of the land over which the retreating shoreline must move. Although the Rule continues to find some use (e.g., in Australia), its predictions should be ignored.

As sea level rises, many if not most shorefront communities will erect sea walls, which in the case of barrier islands must completely surround the island. Eventually beaches will disappear in front of seawalls. Beach nourishment will become economically unfeasible, as the sand will disappear at an ever-increasing rate. Meanwhile when the barrier island communities are threatened with destruction, the cities will be deeply involved in their own response to sea level rise. Certainly Boston, New York and Miami will trump barrier island communities like those on the Outer Banks of North Carolina for funding.

Miami illustrates a rather spectacular problem facing many cities that must try to preserve themselves as sea level threatens to inundate them. The city sits atop the highly porous Miami Limestone, which allows water to flow freely through it. If a seawall were built to hold back the sea, the water level would be the same on both sides of the wall. Instead of seawalls, Miami will have to build dams that surround the city and extend to the base of the porous rock formation, greatly increasing the cost of response to a rising sea. It may some day be called the Great Miami Dam!

It seems likely that the cities will be where the world’s national treasure will be expended and the remaining shorefront communities will face eventual abandonment. For the sake of the beaches we can only hope that a real retreat policy will be instituted and as communities are abandoned, their buildings will be demolished and removed. Otherwise we can expect that within 40 to 60 years, the world’s beaches will begin to be lined with debris from abandoned and deteriorating buildings providing much hazardous material to pollute the oceans.

If our beaches are to survive for our grandchildren’s enjoyment, the time has come to plan the big withdrawal. 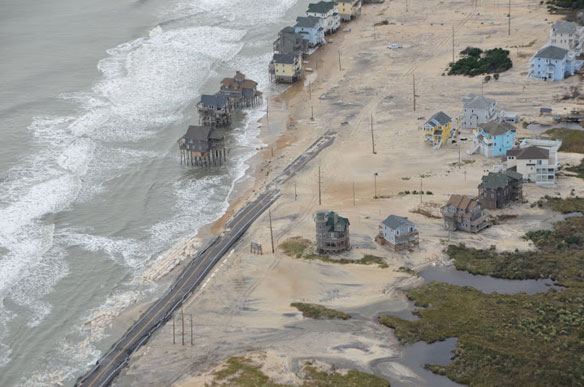