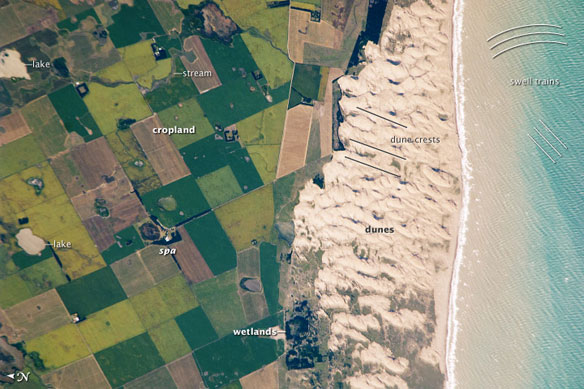 The Médano Blanco (“White Dunes”) are a recreational area about 35 kilometers (22 miles) west of the twin port cities of Nicochea-Quequén in Argentina.

The Médano Blanco dune field extends 3.5 km (2 miles) at its widest part and separates the Atlantic Ocean from intensive sunflower cropland, visible as the angular pattern of green and brown fields at image left. Small streams, oriented toward the coast, cross the farmland. Water from these streams is dammed behind the dunes and even within the dunes, where wetlands flourish.

Narrow cordons of coastal dunes stretch for hundreds of kilometers along this part of Argentina’s coast. The Médano Blanco is not far from the arid and windy borderlands with Patagonia, one of the windiest places on Earth.

The effects of strong westerly winds (blowing from bottom to top in this image) can be seen everywhere in this astronaut photograph. Dune-ridge crests are oriented at right angles to the prevailing wind.

Geologists suspect that erosion by wind has excavated numerous hollows, which now dot the farmland as small shallow lakes. A stand of dark green trees has been planted on the upwind side of a health spa, the white dot is the roof of a stately building, as a protective barrier against the wind.

The white fringe along the seashore is formed by lines of breaking waves.

Crossing swell trains appear offshore in the Atlantic, and the curvature of the swell shows the effect of the westerly wind. Winds tend to drive the sea currents in this area, though some prominent onshore swells also approach the coast from the southeast. The light brown tinted seawater near the shore is rich with fine mud that is stirred up out of coastal sediments by wave action, then washed seaward and east by currents.

How Nature’s Patterns Form, by Mari N. Jensen, College of Science, University of Arizona
“Most patterns you see, including the ones on sand dunes or fish or tigers or leopards, and even the defects in the patterns, have many universal features.”