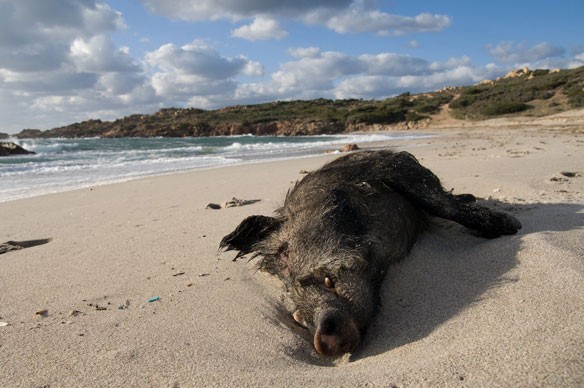 Translation:
Since 36 dead wild boars have been found on the coast of north-western France this month, amid suspicion of algae poisoning, necropsies have been being carried out.

The first tests on six wild boars washed up on brittany’s beaches, showed that all but one, had hydrogen sulphide gas (emitted by rotting algae) in their lungs, confirming the suspicion toward the prior hypothesis that the wild boars suffocated from the poisonous gases emitted by rotting green algae.

However, Hydrogen sulphide gas (H2S) has not been found in the sixth animal, preventing the testers from concluding they’d been killed from breathing fumes from rotting seaweed.

Test results on the remaining boars haven’t been released yet.

Some beaches in Brittany are regularly hit by the algae, but the problem has worsened in recent years.

Environmentalists and officials say it is a result of the nitrates in fertilisers used by the region’s farmers.

According to a Guardian report, “local environmentalists have long campaigned against the dangers of what has become known as Brittany’s “killer” green algae. It has been affecting the rugged north Breton coastline for decades but has increased in recent years, causing the death of a worker who was clearing it in 2009, as well as killing dogs and a horse walking on the beach. Guardian

The French Government has launched a massive long-term plan to clear the beaches of algae, hauling away the noxious growth with bulldozers. But campaigners say nothing will change unless Brittany’s powerful agriculture and food industry cuts its nitrates use.

The algae is harmless until it dries and then decomposes, giving off a foul smell. Pockets of the toxic gas can become trapped under its crust. Thousands of tonnes of green algae have been cleared from the Brittany coast this year. In Finistère the amount of algae has grown since last year.

In a front-page editorial entitled, Green Algae: The Unbearable Denial, Le Monde said the French state, in thrall to lobby groups, was downplaying the role of agricultural pollution in the proliferation of noxious and toxic algae along the coasts.

Wave Of Toxic Green Beaches, France, By Sharlene Pilkey, Coastal Care
With beaches and coastlines all over the world already under attack from sea level rise, pollution, mining, driving, seawall construction and human development encroachment, another menace is mounting an assault. Humans are behind this one too…