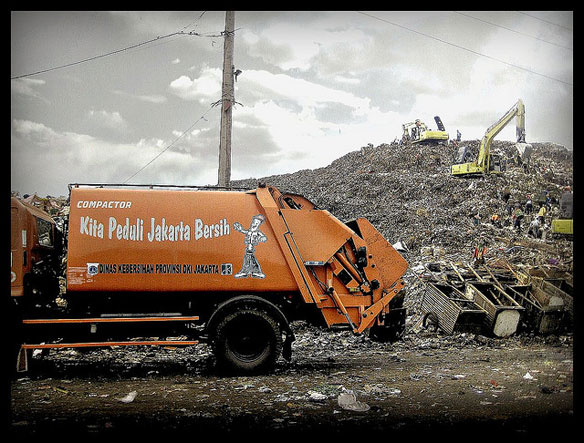 The Bantar Gebang waste landfill, has been recognised as the largest landfill in the Indonesian Islands. Established in 1989 in Bekasi, East Jakarta, an area that was predominately forest land, now 20 years later, an industry based around the unwanted refuse of other’s has been created. Over 600 trucks per day, around 5,000 workers, have found constant work and a home amongst the dumpfill.

An estimated 6,500 metric tons of garbage is deposited at the sprawling 125-hectare landfill daily.
…

Jakarta Residents Cash Their Trash at ‘Waste Banks’,The Jakarta Globe
Dozens of people line up in East Jakarta with bags filled with plastic bottles, glass containers, paper and cardboard. They are there to sell their trash to the local “waste bank” cooperative, which is helping to teach residents about recycling and addressing garbage problems.

Collecting To Survive, At Bantar Gebang: A Slideshow