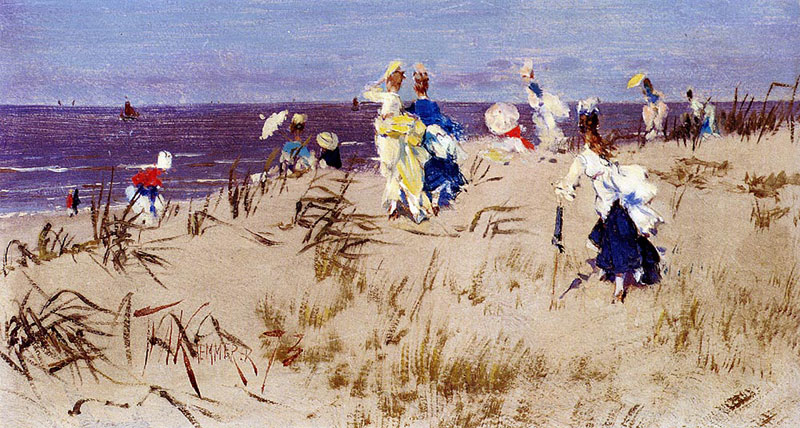 The Great Painters And The Beach

The Great Painters And The Beach (Part 1: The European Masters
By Claire Le Guern

Beach scenery has guided and inspired the strokes on canvas of painting masters of all horizons, translating in colors, shapes and movement, the very emotions emanating in presence of the natural beauties of the seashore.

Dark clouds and bright days, winds and peaceful calm, storms and silences, pain and happiness, austerity and sensuality, hardship and hedonism, warmth and cold, fantasy and anguish, have all drawn painters to the shores. The beach is subject, object, central piece or decor… indubitably celebrated.

Through the eyes of the European Great Masters, the ocean and seashore become radiant palettes of colors, natural and unquenchable sources of art. The beach becomes the very paint of their magnificent inspiration shaped in visual forms through awe-inspiring masterpieces, acclaimed, recognized, appreciated now and for generations to come.

The artful encounter of the great painters and the beach is a love story, celebration of life, a communion with eternity…

We’ll now set sail on a non-exhaustive travel in art history and view some of the most famous European seashore paintings from the mid 17th century to 20th century.

Inspired by the english seascape, London-born Joseph Mallord William Turner‘s personal and romantic response to the violence of the sea, is beautifully translated in paintings such as, “Wreckers, Coast of Northumberland, Oil on Canvas” or Waves Breaking on the Beach”, watercolor. Turner is commonly known as “the painter of light” and his work is regarded as a Romantic preface to Impressionism.

In France, in 1833, Eugène Isabey, offers Plage a marée basse depicting seascape and coastal life, while traveling in Normandy and Britain.

Great painter of the marines, born in coastal Honfleur, Eugène-Louis Boudin, the son of a sailor, painted the world he knew so well: the beaches, ships and changeable skies of the Normandy coast. Expert in the rendering of all that goes upon the sea and along its shores. His pastels, summary and economic, garnered the splendid eulogy of Baudelaire, and Corot who, gazing at his pictures, said to him, “You are the master of the sky.” (Wikipedia- Eugène Boudin). He also took as his subjects the elegant society crowd which flocked to fashionable beach resorts such as Trouville during the Second Empire. The sense of a scene snatched from life, reinforced by vibrant light effects, makes Eugène Boudin a forerunner of Impressionism, and indeed, it was he who introduced the great Claude Monet to open air painting when the latter was only seventeen. ( Musée D’orsay / Commentaires, Eugène Boudin).

Claude Monet’s Impression, Sunrise (Musée Marmottan Monet, Paris) exhibited in 1874, gave the Impressionist movement its name when the critic Louis Leroy accused it of being a sketch or “impression,” not a finished painting. It demonstrates the techniques many of the independent artists adopted: short, broken brushstrokes that barely convey forms, pure unblended colors, and an emphasis on the effects of light. Rather than neutral white, grays, and blacks, Impressionists often rendered shadows and highlights in color.

Since the early nineteenth century, Normandy’s beaches have attracted many artists, Édouard Manet and Claude Monet, gloriously painted the western coastal France, the beaches of Berck and Etretat. The clarity of the air, the quality of the light and amazing cliffs embracing the bay of Etretat, greatly inspired Monet. A little earlier Gustave Courbet, scandalous leader of a Realist movement, was also impressed by these coastal scenery, and immortalized the cliffs, in a 1870 painting. Courbet sent to the Salon of 1870, The Etretat Cliffs after the Storm and La vague, an intense vision of the stormy sea, with all the savage power of natural forces at work.

In Gil Blas on 28th September 1886, Guy de Maupassant, a famous artist who contoured the same Normandy seascape, but with his written words, recounts a visit he made to Courbet during his stay at Etretat: “In a huge, empty room, a fat, dirty, greasy man was slapping white paint on a blank canvas with a kitchen knife. From time to time he would press his face against the window and look out at the storm. The sea came so close that it seemed to batter the house and completely envelope it in its foam and roar. The salty water beat against the windowpanes like hail, and ran down the walls. On his mantelpiece was a bottle of cider next to a half-filled glass. Now and then, Courbet would take a few swigs, and then return to his work. This work became “La Vague”, and caused quite a sensation around the world”. (Musée d’Orsay / Commentaires).

The two canvases, consolidated Courbet’s reputation and made him one of the leading figures in the art scene of his time. “His tide comes from the depth of ages,” Paul Cézanne would later comment.

Met with considerable public and critical success at both Salon of 1870 and 1874, young Dutch Frederick Hendrik Kaemmerer, student of Academic art leader Jean Leon Gerôme, was awarded a medal at the Salon of 1874. His brilliantly painted and often provocative pictures, reminding of the pure tradition of the Romantic Delacroix and Alexandre Cabanel, is beautifully depicted in an almost photographic precision in At The Seashore. As his style evolves, Kaemmerer’s technique becomes more free, where emotion as an authentic source of aesthetic experience surpasses the purity of lines, at times approaching an almost impressionist brushstroke, as in Elegant Women On The Beach.

The artful encounter of the Great Painters and the Beach is a love story, a celebration of life, a communion with eternity…
—Claire

Described by Gustave Geffroy in 1894 as one of “les trois grandes dames” of Impressionism alongside Marie Bracquemond and Berthe Morisot, Mary Cassat known as a “painter of mothers and children,” was the only American born painter, to exhibit with the Impressionists in Paris, where she lived and painted most of her life. Cassatt’s popular reputation is based on an extensive series of rigorously drawn, tenderly observed, paintings and prints on the theme of the mother and child. In 1884, she painted Children Playing on a Beach, capturing with magnificence the natural attitudes of children playing in the sand.

On the southern coast of France, post impressionist Paul Cézanne‘s work laid the foundations of the transition from the 19th century conception of artistic endeavour to a new and radically different world of art in the 20th century. Cézanne can be said to form the bridge between late 19th century Impressionism and the early 20th century’s new line of artistic enquiry, Cubism. The line attributed to both Matisse and Picasso that Cézanne “is the father of us all” cannot be easily dismissed.(Wikipedia).

Towards the end of the 19th, Pierre-Auguste Renoir, a celebrator of beauty, and especially feminine sensuality, offers “Personnes sur la plage, ” a theme inspiring english painter Philip Wilson Steer in an airy and rose petal depiction of feminine elegance “Young woman on the Beach.”

Two years later, Vincent Van Gogh, took a trip to Saintes-Maries-de-la-Mer on the Mediterranean sea, where he made several paintings of the seascape and town. Seascape at Saintes-Maries (Fishing Boats at Sea) was painted six years after Van Gogh wrote that he wished to paint a seaside painting of sand, sea and sky. In this painting the combination of a high horizon and boats close to the top edge of the frame, draw the audience in to the choppy sea in the foreground and center of the picture. He also made three drawings of this composition.

In the second half of the 1880s, after Georges Seurat and other Neo-Impressionists had exhibited their paintings at the Salon des XX in Brussels, several Belgian artists were converted to pointillism and the optical mixture of colors.

The painter George Lemmen, then scarcely twenty, was among these enthusiasts. For about a decade, gradually loosening Seurat’s theories, he developed an original technique, applied more particularly to portraits and landscapes. After 1891, under the influence of his fellow countryman Henri Van de Velde, his paintings showed an “Art Nouveau” and Plage à Heist is a remarkable example.

At the same time period, Paul Gaugin embark in 1891 for his decisive journey to Polynesian waters, sailing towards a new life, hoped to be primitive and paradisiac. Anchoring in Tahiti, paul Gaugin wishes “to live there in ecstasy, calm and art”. In 1891, Gauguin produces the masterpiece Femmes de Tahiti, ou Sur la plage (Women of Tahiti, also known as On the Beach), a composition typical of his paintings during the early part of his first stay in the Pacific. While choosing somewhat rigid poses, Gaugin introduces a rhythm into the painting through a mysterious, harmonious geometry…( Musée D’orsay / Commentaires, Paul Gaugin).

In the same era, back on the Normandy coast, Raoul Duffy, who was born in Le Havre, painted the coastal vicinity, particularly the beach at Sainte-Adresse, « La Plage de Sainte-Adresse » made famous by Eugène Boudin and Claude Monet. Dufy travels away from his native Normandy with Georges Braque, who adopted the Fauvist style as well, using brilliant colors to represent emotional response, and also developed the art style known as Cubism, along with Pablo Picasso.

Henri Matisse, remarkable artist often considered as the most important French painter of the 20th century, leader of the Fauvist movement around 1900, pursued the expressiveness of colour throughout his career. Matisse is regarded, along with Picasso and Marcel Duchamp, as one of the three artists who helped to define the revolutionary developments in the plastic arts in the opening decades of the 20th century, responsible for significant developments in painting and sculpture. His mastery of the expressive language of colour and drawing, displayed in a body of work spanning over a half-century, won him recognition as a leading figure in modern art. In 1905, Le Bonheur de Vivre, is set with the beach and ocean in the background.

Branching from impressionism, Paul Signac, a French neo-impressionist painter who, working with Georges Seurat, helped develop the pointillist style, a technique that relies on the ability of the eye and mind of the viewer to blend distinct dots of pure color applied in patterns to form an image, and a fuller range of tones. In 1901, Le Port de Saint Tropez, is painted using this technique.

Then, attracted by the southern coast of France, Pablo Picasso, in the 1920’s, gave an untraditional, sultry, far beyond the elegance of impressionist marine painting, and modern visual form, to hedonism and sensuality.

Two Women Running On the Beach painted in the summer of 1922, is a monument to the new freedoms that swept the world after the first world war. Picasso’s awe-inspiring Figures on the beach (1931)
depicts beach-coloured lovers, emerging from the sand itself, or just in surrealism style, exquisitely intricated in its apparent simplicity yet profound relevance: Homme et Femme sur la plage, 1956

The beach is celebrated by all these great painters, in its light and in its darkness… always morphing and oscillating with the rhythm of the artist’s emotions and perception of the magnificent spectacle that is the Beach.

Note : All of the above artist paintings’ images are in the public domain in the United States Of America, because their copyright terms is longer than 70 years, thus have expired. As per the images of Pablo Picasso’s and Magritte paintings, these artworks may be protected by copyright. It is posted on the wikipaintings.org site, and wikipedia site with a fair use principles disclosure.