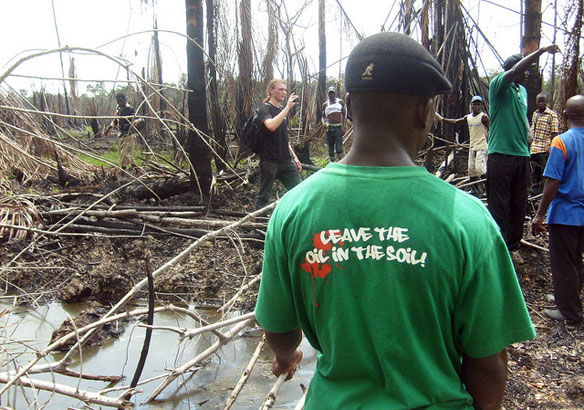 An environmental group said Tuesday that an oil slick had approached Nigeria’s coastline after a major Shell spill last week, but the company insisted that its spill had been largely dispersed.

Nigerian group Environmental Rights Action, which closely monitors oil spills in the country, said oil was reported along the shoreline of fishing communities in Bayelsa state as well as Delta state…

Shell says Nigeria oil spill contained, Reuters
The spill comes four months after a U.N. report criticized Shell and the Nigerian government for contributing to 50 years of pollution in a region of the Niger Delta

Oil Spill Disaster Monitoring Along Nigerian Coastline, A Study by Fatai O. A. Egberongbe, Peter C. Nwilo and Olusegun T. Badejo, Nigeria
In 1956, Royal Dutch Shell discovered crude oil at Oloibiri, a village in the Niger Delta, and commercial production began in 1958. Today, there are 606 oil fields in the Niger Delta, of which 360 are on-shore and 246 offshore. Nigeria is now the largest oil producer in Africa and the eleventh largest in the world…