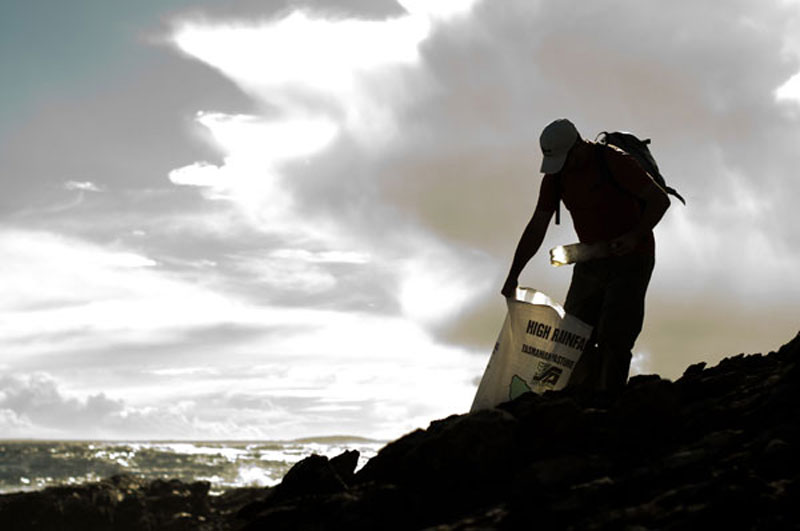 The Rugged, by Johnny Abegg

Pure Man and Woman to me exists in the face of adversity, in the essence of nature and wild places. It nurtures the animal within. The South West National Park in Tasmania is one of those rugged places that brings you face to face with yourself… and it’s up to you what self it brings out.

“In the depth of Winter I finally learned that there was in me an invincible Summer.”
—Albert Camus

The South West Marine Debris Cleanup is an invitational cleanup initiative orchestrated by Marine Cartographer Matt Dell, and has been running for over 10 years. The SWMDC is currently run via fishing and charter boats, lead by skipper of the ‘Velocity’ Dave Wyatt, who has been Matt’s co-pilot for the majority of the cleanup’s history.

I was lucky enough to be invited through the cleanup’s principal supporter Patagonia for a second year, along with Patagonia’s man of surf Glen Casey, filmmaker Mick Waters, and 12 other crazy wilderness fanatics in the cleanup experience.

The Southwest National Park is a 618,267-hectare (1,527,770-acre) national park. The park is Tasmania’s largest and forms part of the Tasmanian Wilderness World Heritage Area. For the most part, this area of the world is one of the most remote and rugged on the planet, so it’s humbling to see the amount of rubbish that washes up on the beaches. Everything from rope, plastic, cans, buoys, lighters, bottles, biros, bait straps and many other man-made atrocities were the order of our days, in between being jaw-dropped by the awesomeness of the isolation and wonder of the South West.

The trip lasted a week, so in a period like that in Tasmania you are bound to hit some rough seas. On our first day trip around South West Cape heading for the West, we were blessed with a confused 3-4 Metre swell which had a few of the combatants aiming their sea-sickness towards buckets and toilets. To me getting sea-sick was a real initiation to the whole experience, and part of the process. I wasn’t thinking that whilst spewing into a bucket though. Hindsight is a bitch and a blessing it seems.

After a good 8 hours of sea-initiations, we found ourselves at Nye Bay on the West Coast, where a select few surfers got a nice session at a remote right hand reef break, whilst the other gathered up 3139 pieces of rubbish. The team then zig-zagged the jagged and amazing triangular islands around Port Davey to the secluded Spain Bay, and to our biggest daily haul of rubbish on the remote Stephens Beach, which amassed a massive 11,253 piece total. The 45min bush walk to and from Stephens was a real stripe earner, on top of the 30+ bags we dragged 3kms up the beach. The daily pickup wasn’t to end with casual beers on the boat, no sir, that’s when the itemised count starts, so the team really earned those beers post count after the memorable Stephens Beach tally, and a good round of zzz’s for all.

From Stephens the troop swayed back around South West Cape to the lush scenic coves and beaches of the South Coast. The cleanup took a more casual affair at the majestic New Harbour, or as Matt Dell aptly puts it “Beer Can Bay” with a 406 singular total.

The Velocity’s Skipper Dave Wyatt’s radio was a great stirrer for many of us, as a forecast of a 6-9 Metre swell loomed. Full steam ahead with an increasing swell on our coat-tails, as we found ourselves nestled inside Recherche Bay for the onslaught of a 35-45knot South-Westerly change. Dave’s boat also reached 21 knots surfing down a good 4-5 Metre howler around the South East Cape. Always as surfer no matter what the craft or perception.

The final cleanup day was a case of mental toughness, as the team cleaned Recherche Bay against sideways rain, 70-80km winds and a few beers hidden in those backpacks. At times we where like seagulls trapped in a motionless vortex of wind, before being catapulted. All-in-all it was a crazy day to remember, and an extra 678 pieces to the total, as we all said our goodbyes in different ways, shapes and beer-ridden forms.

The 2012 is monumental, it being the 100,000 piece milestone for Matt Dell and Dave Wyatt for the SWMDC. An amazing feat from it’s beginnings in 1999. This trip itself amassed a massive 27,317 piece total, and a welcomed invite to return next year. I can’t remember how many 1000 pieces of small plastic ‘Spikey’ counted in one nights count but it was inspiring!

For me personally, this sort of trip is a once in a lifetime experience.

Having grown up in Tasmania as kid (until the age of 15), I’d always romanticised when I’d get to visit this wild and beautiful jewel, but with the beauty it seems that there is an uglier side, seeing how such a remote place is influenced by our Western ways. I can speak on behalf of all of the volunteers that it was inspiring being a part of the South West Marine Debris Cleanup, and comforting to know that in between the laughs, the surfing, and the camaraderie that we probably aren’t changing the world, but we are the ones out there doing it.

In the words of Tassie’s great slogan…

From Washed Up Rubbish to Gallery Art

A Video: © By Little House Production