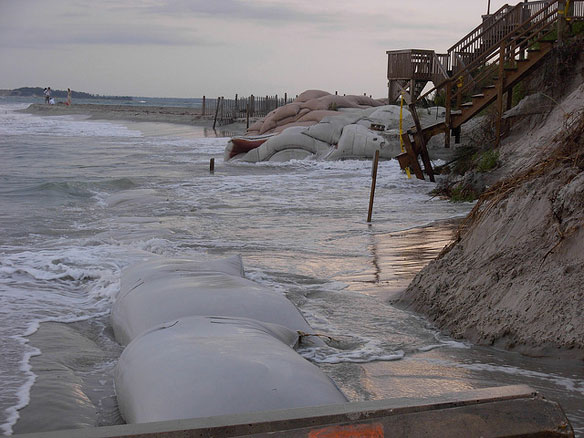 “A matter of Time”. The state government only recently repleneshed the sand in this beach area. There are a few very nice houses that will really be oceanfront property if it’s not done again very soon… Beach Erosion, North Carolina. Captions and Photo source: ©© Michael Feagans

Rates of sea level rise are increasing three-to-four times faster along portions of the U.S. Atlantic Coast than globally, according to a new U.S. Geological Survey report published in Nature Climate Change.

Since about 1990, sea-level rise in the 600-mile stretch of coastal zone from Cape Hatteras, N.C. to north of Boston, Mass. coined a “hotspot” by scientists, has increased 2 – 3.7 millimeters per year; the global increase over the same period was 0.6 – 1.0 millimeter per year.

Based on data and analyses included in the report, if global temperatures continue to rise, rates of sea level rise in this area are expected to continue increasing.

The report shows that the sea-level rise hotspot is consistent with the slowing of Atlantic Ocean circulation. Models show this change in circulation may be tied to changes in water temperature, salinity and density in the subpolar north Atlantic.

“Many people mistakenly think that the rate of sea level rise is the same everywhere as glaciers and ice caps melt, increasing the volume of ocean water, but other effects can be as large or larger than the so-called ‘eustatic’ rise,” said USGS Director Marcia McNutt. “As demonstrated in this study, regional oceanographic contributions must be taken into account in planning for what happens to coastal property.”

Though global sea level has been projected to rise roughly two-to-three feet or more by the end of the 21st century, it will not climb at the same rate at every location. Differences in land movements, strength of ocean currents, water temperatures, and salinity can cause regional and local highs and lows in sea level.

To determine accelerations of sea level, USGS scientists analyzed tide gauge data throughout much of North America in a way that removed long-term (linear) trends associated with vertical land movements. This allowed them to focus on recent changes in rates of sea-level rise caused, for example, by changes in ocean circulation.

The report, Hotspot of accelerated sea-level rise on the Atlantic coast of North America, was published in the journal Nature Climate Change.

Hotspot of accelerated sea-level rise on the Atlantic coast of North America, Nature Climate Change
Climate warming does not force sea-level rise (SLR) at the same rate everywhere. Rather, there are spatial variations of SLR superimposed on a global average rise. These variations are forced by dynamic processes arising from circulation and variations in temperature and/or salinity, and by static equilibrium processes, arising from mass redistributions changing gravity and the Earth’s rotation and shape…

Sea rise faster on East Coast than rest of globe, AP
From Cape Hatteras, N.C., to just north of Boston, sea levels are rising much faster than they are around the globe, putting one of the world’s most costly coasts in danger of flooding, government researchers report.

Lawmakers debate science as sea level rises faster along East Coast, The News Observer
As state Rep. Pat McElraft prepares this week to unveil compromise language on a bill to slow down the science of sea-level forecasting in North Carolina, a new study by the U.S. Geological Survey finds that the rate of sea-level rise is increasing several times faster on the northern Atlantic Coast – from Boston to Cape Hatteras – than around the world as a whole…