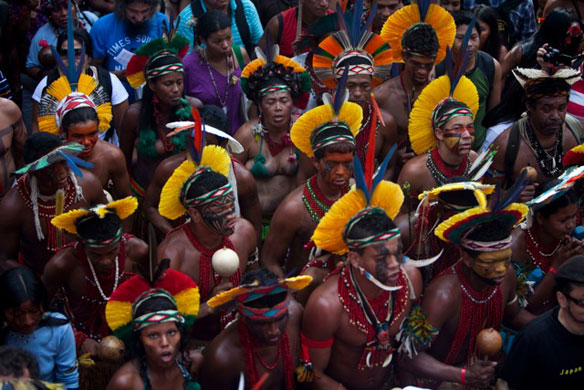 Nearly 1500 people used Rio’s Flamengo Beach as a canvas on June 19, 2012. Their bodies formed the lines of an enormous image promoting the importance of free-running rivers, truly clean energy sources like solar power and including indigenous knowledge as part of the solution to climate issues. The activity was led by Brazil’s many indigenous peoples organized under the umbrella of the Articulation of Brazilian Indigenous Peoples. Captions: © Caroline Bennett. Photo source: ©© International Rivers

Yale 360 Video: Belo Monte Dam Controversy
The Belo Monte dam, now under construction in the Amazon, is heralded as an abundant power source for Brazil’s burgeoning economy. But critics contend the project’s benefits are outweighed by the environmental and social costs, the flooding of 260 square miles of rainforest and the displacement of more than 20,000 people. A Yale Environment 360 video report, explores both sides of this controversial project.