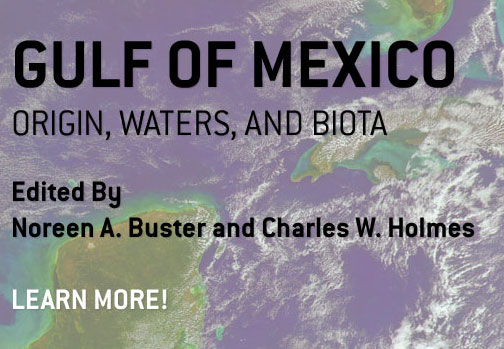 Edited by Noreen A. Buster and Charles W. Holmes

A continuation of the landmark scientific reference series from the Harte Research Institute for Gulf of Mexico Studies, Gulf of Mexico Origin, Waters, and Biota, Volume 3, Geology provides the most up-to-date, systematic, cohesive, and comprehensive description of the geology of the Gulf of Mexico Basin. 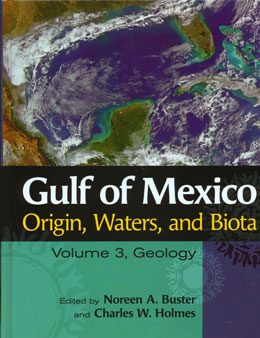 The six sections of the book address the geologic history, recent depositional environments, and processes offshore and along the coast of the Gulf of Mexico.

Scientific research in the Gulf of Mexico region is continuous, extensive, and has broad-based influence upon scientific, governmental, and educational communities.

This volume is a compilation of scientific knowledge from highly accomplished and experienced geologists who have focused most of their careers on gaining a better understanding of the geology of the Gulf of Mexico. Their research, presented in this volume, describes and explains the formation of the Gulf Basin, Holocene stratigraphic and sea-level history, energy resources, coral reefs, and depositional processes that affect and are represented along our Gulf coasts. It provides valuable synthesis and interpretation of what is known about the geology of the Gulf of Mexico.

Five years in the making, this monumental compilation is both a lasting record of the current state of knowledge and the starting point for a new millennium of study.

About the author:
Noreen A. Buster is a geologist at the U.S. Geological Survey, St. Petersburg Coastal and Marine Science Center, located in St. Petersburg, Florida.

Charles W. Holmes is retired from the U. S. Geological Survey. Specializing in geochemistry and sedimentology and focusing on geochronological issues, he is currently executive director of Environchron, LLC, and adjunct professor at Eckerd College in St. Petersburg, Florida.

What Readers Are Saying:
“Served as the standard reference work for the Gulf of Mexico.”

“A very detailed technical document that will be of interest to readers who want to know about the geology of the Gulf of Mexico.”