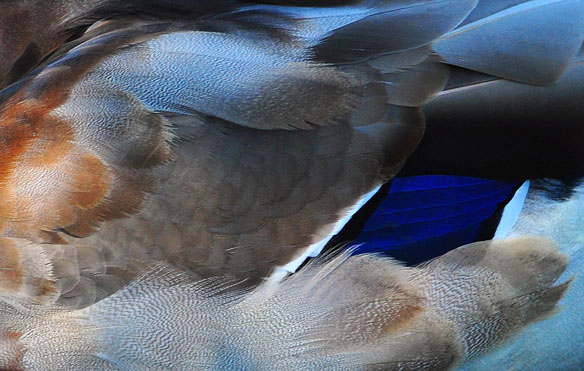 Mallards (Anas platyrhynchos), that familiar duck species ubiquitous to park ponds with males parading their emerald-green heads, have picked up a new feeding habit along the beaches of Santa Barbara.

These ducks have learned to surf. For sand crabs.

“We watched as a swash (the part of a broken wave that washes up a beach) approached a Mallard (Anas platyrhynchos) from behind, lifted it, and deposited it down the beach; the bird then stuck its bill in the sand, swept it from side to side, dug, captured a Pacific sand crab (Emerita analoga) and swallowed it; this occurred again and again.”

The scientists described the surfing behavior further: “Unlike foraging shorebirds, Mallards do not avoid incoming swashes. Instead, the incoming swash lifts and deposits them down the beach.”

Lafferty and colleagues first observed this behavior at Coal Oil Point Reserve near the UC Santa Barbara campus in 2011. The behavior continues to be observed in Santa Barbara Mallards, and is now also known from Mallards in Ventura and San Diego County, as well as Coos Bay in Oregon.

Sand crabs are quick burrowers adept at escaping human fingers and hungry predators, as any surf angler or curious child knows. The only other ducks known to feed on them are scoters (genus Melanitta), which are specialized for sea diving. Black Brants (Branta bericla nigricans) have also been seen to feed in the surf zone on sand crabs.

But Mallards are a freshwater species that mostly “dabbles” at the water surface for food bits.

How did they learn to surf and dig for little sand crabs? Is this a case of duck-see, duck-do?

The scientists speculate:
“It is possible that this behavior is a recent by-product of adaptation to human-dominated landscapes. Mallards commonly occur at wetlands and parks near sandy beaches and are tolerant to human activities. Continual exposure to novel feeding opportunities in these areas might have eventually predisposed some Mallards to mimic shorebirds feeding in the swash zone. In any case, Mallards can now be considered a part of the sandy beach food web along the west coast.”