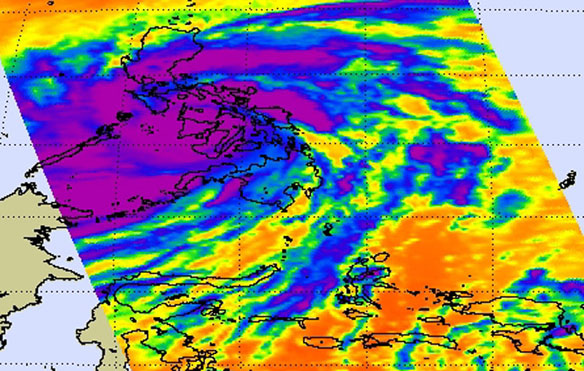 Super-Typhoon Haiyan slammed into the eastern Philippines as the strongest tropical cyclone of the year, and today, Nov. 8, is exiting the country and moving into the South China Sea. NASA’s Aqua satellite captured visible and infrared data of Hiayan after it made landfall near Leyete, identifying the extent of its power.

As Super-Typhoon Haiyan moved over the central Philippines on Nov. 8 at 05:10 UTC/12:10 a.m. EDT, the Moderate Resolution Imaging Spectroradiometer or MODIS instrument aboard NASA’s Aqua satellite captured a visible image. The image showed that Haiyan maintained its structure as it moved over the east central Philippines. As the center moved through the eastern Visayas, large, thick bands of thunderstorms spiraled into the center from the northeast. Hiayan’s clouds extended over the entire country from the Cagayan Valley in the north to the Soccsksargen region in the south.

By Nov. 8 at 0900 UTC/4 a.m. EDT/5 p.m. Philippines local time, Haiyan’s maximum sustained winds dropped to 145 knots/167 mph/268.5 kph, still making it a powerful Category 5 tropical cyclone on the Saffir-Simpson Scale. It was moving through Western Visayas and was 214 nautical miles south-southeast of Manila. It is moving quickly to the west at 22 knots/25.3 mph/40.74 kph, which will reduce flooding potential.

Many warnings are still in effect today, Nov. 8, as Hiayan continues to exit the western Philippines.
Public storm warning signals have been raised in large areas of the country. In Luzon, Signal #1 was in effect for: Metro Manila, Bataan, Cavite, Rizal, Laguna, Quezon, Camarines provinces, Albay, Sorsogon. Signal #2 is in effect for: Lubang Island, Batangas, Marinduque, rest of Palawan, Burias Island, Masbate and Ticao Island; Signal #3 in effect for the rest of Mindoro provinces, Romblon, rest of northern Palawan including Puerto Princesa City; and Signal #4 is in effect for: extreme northern Palawan, Calamian Group of Islands, southern Occidental and Oriental Mindoro.

In Visayas, Signal #1 remained in effect for: Samar provinces, Leyte provinces, Camotes island, Bohol and Siquijor; while Signal #2 is up for: Negros provinces, Cebu, Biliran Island; and there is no Signal #3, but there is a Signal #4 for Aklan, Capiz, Antique, Iloilo and Guimaras.

In Mindanao, a Signal #1 remained in effect for the Camiguin, Surigao del Norte, Dinagat; and a Signal #2 is up for: Siargao. According to PAGASA, the Philippine authority on meteorology, flashfloods and mudslides are possible in areas under signal #2, 3 and 4. In addition, storm surges of up to 21 feet/~7 meters are possible under a Signal #2.

The U.S. Navy’s Joint Typhoon Warning Center in Hawaii said it was the strongest tropical cyclone in the world this year.

Hiayan is forecast to move through the South China Sea and make a final landfall as a strong typhoon in central Vietnam in a couple of days.

Typhoon Haiyan: What Alarms Filipinos Is The World Ignoring Climate Change, Guardian UK
We don’t yet know the death toll or damage done, but we do know that the strength of tropical storms such as Haiyan or Bopha is linked to sea temperature. As the oceans warm with climate change, there is extra energy in the system. Storms may not be increasing in frequency but Pacific ocean waters are warming faster than expected, and there is a broad scientific consensus that typhoons are now increasing in strength…