DamNation is a feature documentary, shown this week at SXSW in Austin, Tx.

Through the use of beautiful cinematography and authenticity on several levels, it educates the audience in a powerfully moving way…

Produced by Stoecker Ecological and Felt Soul Media” and presented by Patagonia.

“This powerful film odyssey across America explores the sea change in our national attitude from pride in big dams as engineering wonders to the growing awareness that our own future is bound to the life and health of our rivers. Dam removal has moved beyond the fictional Monkey Wrench Gang to go mainstream. Where obsolete dams come down, rivers bound back to life, giving salmon and other wild fish the right of return to primeval spawning grounds, after decades without access. DamNation¹s majestic cinematography and unexpected discoveries move through rivers and landscapes altered by dams, but also through a metamorphosis in values, from conquest of the natural world to knowing ourselves as part of nature.”

New Global Warming Culprit: Dams
Washington State University researchers have documented an underappreciated suite of players in global warming: dams, the water reservoirs behind them, and surges of greenhouse gases as water levels go up and down… 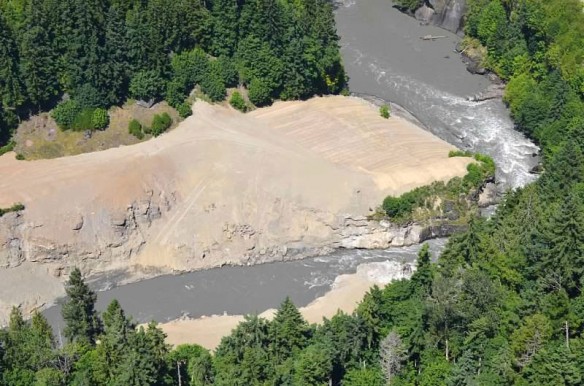 Sediments on the Elwha river shores. Photo courtesy of: © Andy C., Program for the Study of Developed Shorelines (PSDS)