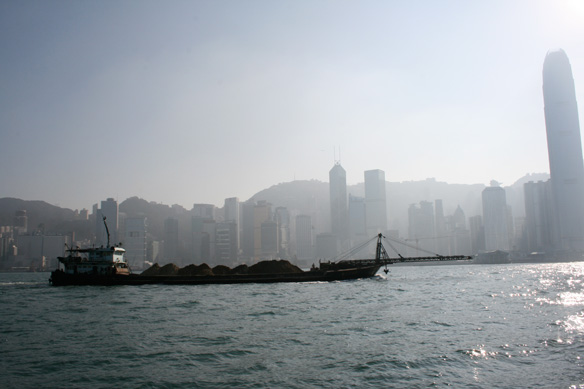 The U.S. and most members of the Association of Southeast Asian Nations want a halt to the projects, which they suspect are aimed at building islands and other land features over which China can claim sovereignty. U.S. officials say China has reclaimed about 2,000 acres of dry land since 2014…

China’s land reclamation in disputed waters stokes fears of military ambitions, Guardian UK (05-08-2015)
China’s rapidly expanding campaign to construct artificial islands, potentially for military use or airstrips, now totals about 2,000 acres (800 hectares) and could far outstrip that amount as the year goes on, according to a senior US defense official… China’s reclamation program in disputed waters of the South China Sea dwarfs that of any other nation and has inflamed tensions in the region.

Great Wall Of Sand: Chinese Mischief at Mischief Reef, The New York times (04-12-2015)
In recent years, China has laid claim to the South China Sea with increasing fierceness, challenging the counterclaims of neighboring states and confronting their fishing boats on the open water. But new satellite photos have provided the most dramatic evidence yet of just how aggressively China is acting to establish a sphere of influence in the South China Sea…

Sand Wars, An Investigation Documentary, By Denis Delestrac
Sand is the second most consumed natural resource, after water. The construction-building industry is by far the largest consumer of this finite resource. Land reclamation, shoreline developments and road embankments are using massive amounts of sand as well.

Dubai’s Staggering Growth, NASA (03-17-2012)
To expand the possibilities for beachfront development, Dubai undertook a massive and controversial engineering project to create hundreds of artificial islands along its Persian Gulf coastline. Built from sand dredged from the sea floor, the islands are shaped in recognizable forms such as palm trees. The construction of the various islands off the coast of Dubai has resulted in changes in area wildlife, coastal erosion and alongshore sediment transport, and wave patterns…