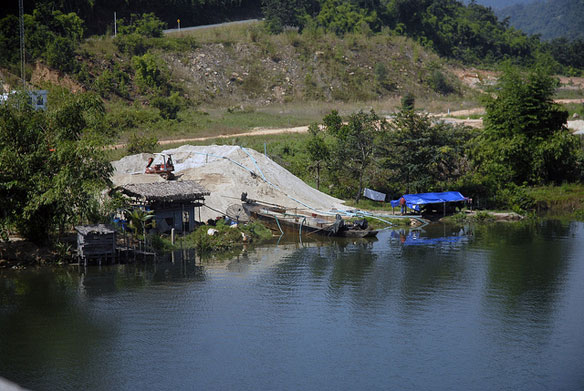 Round a bend in Cambodia’s Tatai River and the virtual silence of a tropical idyll turns suddenly into an industrial nightmare.

Lush jungle hills give way to a flotilla of dredgers operating 24 hours a day, scooping up sand and piling it onto ocean-bound barges. The churned-up waters and fuel discharges, villagers say, have decimated the fish so vital to their livelihoods. Riverbanks are beginning to collapse, and the din and pollution are killing a promising ecotourism industry.

What is bad news for the poor, remote Tatai community is great tidings for Singapore, the wealthy city-state that is expanding its territory by reclaiming land from the sea. Sand from nearby countries is the prime landfill and also essential building material for Singapore’s spectacular skyline.

As more countries ban its export to curb environmental damage entire Indonesian islands have been all but wiped off the map suppliers to Singaporescour the region for what still can be obtained, legally or not. Cambodia, a poor country where corruption is rife and laws are often flouted, is now the No. 1 source.

Singapore is by no means the only nation taking part in what is a global harvest of sand from beaches, rivers and seabeds. Officials and environmentalists from China to Morocco have voiced concern and urged curbs. As construction booms in emerging economies and more sources dry up, however, exploitation of the remaining ones is likely to intensify.

Sand mining began anew in May on southwestern Tatai River, which empties into the ocean almost directly north of Singapore, across 1,300 kilometers (800 miles) of open water.

Despite denials by the main owner of sand mining rights in Koh Kong province, two Cambodian officials told The Associated Press that the sand is destined for the island nation.

Singapore will not say where its sand comes from; the Construction and Building Authority said it is not public information. The National Development Ministry said the state’s infrastructure development company buys it from “a diverse range of approved sources.”

The mining visible on the Tatai River clearly violates some of Cambodia’s own legal restrictions, not to mention a recent government order to suspend it temporarily.

Vessels of a Vietnamese company were tracked by boat from about 10 kilometers (6 miles) upriver to the Gulf of Thailand, where nearly a dozen seagoing barges, tugs hovering around them, took on the sand.

The AZ Kunming Singapore, a 5,793-ton (5,255-metric ton) barge pulled by the AZ Orchid, was seen arriving empty from the open ocean, its tug flying a Singaporean flag. Both are registered with the Singapore government, which would not comment on the barge’s cargo or destination.

Ships from several countries, including China, were spotted in sand-mining operations in Koh Kong province, where residents joked about going toSingapore and planting a Cambodian flag there.

The vessels included one from Winton Enterprises, a Hong Kong-registered group that was subcontracted to export sand to Singapore, according to Global Witness, a London-based environmental group that published a detailed account of the trade last year.

The report said that miners had penetrated protected mangrove, estuary and sea grass areas, breeding grounds for marine life along a coastline and hinterland harboring some of the country’s last wilderness areas.

Cambodia’s cabinet spokesman, Siphan Phay, who was investigating the issue in Koh Kong, appeared angry that the temporary halt order was being ignored. He described the activity as illegal mining destined for Singapore, a surprising statement given that government ministers awarded the concession.

A police officer in the economic crime division, who demanded anonymity given the issue’s sensitivity, also said the sand is going to Singapore.

Ly Yong Phat, who holds the major concession in Koh Kong, has at times openly acknowledged the Singapore connection. But in a recent AP interview, amid tightening restrictions and mounting criticism, he said his company had not shipped sand to Singapore for more than a year because “our sand did not meet their standards.”

The dredging, he added, was for local sale and to deepen river channels.

However, a Malaysian company, Benalec Holdings, said it was ready to tap up to 530,000 tons for a reclamation project in Singapore from several sources in Cambodia, including Ly Yong Phat’s LYP Group.

Known as the “King of Koh Kong,” Ly Yong Phat is one of Cambodia’s biggest tycoons and a senator with close ties to Prime Minister Hun Sen. His holdings include hotels, a casino and agricultural plantations.

Land reclamation has enlarged Singapore by more than a fifth, and up to 100 square kilometers (nearly 40 square miles) more are slated for reclamation by 2030. What was once seabed is now Changi, among the world’s finest airports, and more recently the Marina Bay complex, which includes a 2,560-room hotel and casino developed by Las Vegas Sands Corp.

Mountains of sand are needed for such fills. U.N. statistics show Singapore imported 14.6 million tons last year, ranking it among the world’s top customers. Global Witness estimated that nearly 800,000 tons a year, worth some $248 million, were streaming to Singapore from Koh Kong alone.

The U.N. figures show that Cambodia supplied 25 percent of Singapore’s imports in 2010, followed by Vietnam, Malaysia, Myanmar and the Philippines. With its secrecy and lax enforcement of environmental regulations, Myanmar could emerge as a major supplier.

The damage caused by sand extraction has spurred clampdowns on exports.

Malaysia imposed a ban in 1997, though the media there frequently report on massive smuggling into neighboring Singapore. Former Prime Minister Mahathir Mohamad complains that sand pirates are “digging Malaysia and giving her to other people.”

An Indonesian ban came in 2007, following years of strained relations with Singapore over the sand on islands lying between the two countries. When miners finished with Nipah Island, reportedly all that was left was three or four palm trees protruding above the waterline. Environmental groups say smuggling is believed to be continuing.

Cambodia outlawed the export of sand from rivers in 2009 but allows it from some seabeds. Recently, some government officials said that rivers where seawater flowed into fresh water, replenishing sand naturally, were exempt.

Global Witness spokesman Oliver Courtney said the trade in Cambodia revealed a “mismatch between Singapore’s reliance on questionably sourcedsand and its position as a leader for sustainable development.” The city-state prides itself on environmentally sound urban planning.

The dredging of the Tatai River began on May 17 “with a fury,” creating a veritable traffic jam on the water, said Janet Newman, owner of the riverside Rainbow Lodge.

“Before you could see crab pots bobbing in the river everywhere and fishermen going out. Now there is nothing and nobody,” the British woman said.

Chea Manith of the Nature Tourism Community of Tatai said 270 families along the river have seen an estimated 85 percent drop in catch of fish, crab and lobsters and were being forced to eke out a living from small garden plots. Tourists have all but vanished.

Armed with a petition, village leaders, tourism operators and a wildlife group met with Ly Yong Phat in early July. He appeared sympathetic, Newman said. He substantially reduced the dredging and has promised to stop altogether in October.

A subsequent letter from the Minister of Water Resources and Meteorology ordered the LYP group to halt operations temporarily on the Tatai, citing a breach of regulations. The letter was obtained by Cambodia’s Phnom Penh Post newspaper, which made it available to the AP.

Hun Sen himself expressed concern over the mining in the river.

“We hoped that the prime minister’s recent promise to review the impacts of the sand trade would lead to proper regulation of dredging operations,” said Courtney of Global Witness. “Unfortunately, the pledge does not appear to have been followed up with meaningful action.”

The mining has continued on the Tatai, and violations, such as dredging closer than 150 meters (165 yards) from riverbanks, were clearly evident.

“We are just little people. We cannot do anything,” Chea Manith said.

Newman sounded a more optimistic note. “It’s my hope that the LYP Group will become sympathetic through this experience of having seen the reaction from people passionate about protecting their environment,” she said. “It would be sad if they just went somewhere else to dump the same on others.”

Copyright 2011 By The Associated Press. All Rights Reserved.

Ruling party senator Ly Yong Phat, the “king Of Koh Kong” has defied a stop order endorsed by the Cambodian Prime Minster to halt his controversial sand dredging activities on the Tatai river in Koh Kong.

The Damages Caused By Singapore’s Insatiable Thirst For Land