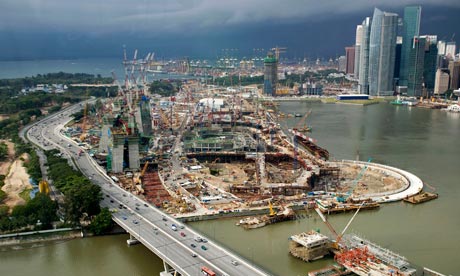 By Jonathan Watts, The Guardian UK

Singapore, which prides itself on being one of the most environmentally friendly nations in Asia, is expanding its coastline with irresponsibly dredged sand from Cambodia, according to a report from an environmental NGO.

The report, Shifting Sand: how Singapore’s demand for Cambodian sand threatens ecosystems and undermines good governance, reveals that much of the demand is from Singapore, a small island state with big ambitions to increase its territory. The city state of 4.9 million people has expanded its surface area from 582 sq km in the 1960s, to 710 sq km in 2008, an increase of 22%, and it has ambitious plans to reclaim further land from the sea.

This requires far more sand than the island is able to provide for itself, prompting suppliers and middlemen to dredge and buy overseas.

Cargo manifests and photographs in the report suggest Singapore imported 14.2m tonnes of sand worth $273m (£184m) in 2008 from Vietnam, Malaysia and Cambodia. Its sourcing has reportedly expanded recently to Burma, the Philippines and Bangladesh.

The lucrative trade has alarmed neighbouring nations, which have seen chunks of their land being shipped off. After local media reported the shrinkage of several islands in Indonesia, the government there banned sales of sand to Singapore in 2008. Malaysia and Vietnam have imposed similar controls.

After the trade moved to Cambodia, the prime minister, Hun Sen, announced last May that his country too would restrict exports of sand.

But Global Witness says coastal dredging operations have increased in the year since. The NGO estimates a single Cambodian province – Koh Kong – has an annual trade with Singapore worth $248m (£168m).

On a single day, the NGO says its investigators have seen nine dredgers inside a single protected area – the Peam Krasop wildlife sanctuary and Koh Kapik Ramsar site.

The dredging operations threaten mangrove swamps, coral reefs and the biggest seagrass bed in the South China Sea, which is home to several rare species including the Irrawaddy dolphin, dugong and seahorses, it said.

Local communities have reported a sharp fall in fish stocks and crab harvests. The Cambodian government has denied any link with dredging operations.

In Cambodia, at least 14 firms have been given dredging licenses. A tonne of sand, which costs $3 (£2) per tonne to extract, can be sold for $26 (£18) per tonne in Singapore. It is unclear how much of the revenues are returned to the people in the form of taxes.

“Cambodia’s natural resource wealth should be lifting its population out of poverty. Instead, international aid has propped up basic services in Cambodia for over 15 years. Meanwhile, money from natural resources disappears into private bank accounts, and nearly 70% of the population subsists on less than $2 a day,” said George Boden, campaigner at Global Witness.

The government of Singapore, which will this summer host the World Cities Summit – focusing on sustainability – denies any wrongdoing. It says the import of sand for reclamation is done on a commercial basis with safeguards for the environment.

“The policing and enforcement of sand extraction licences is ultimately the responsibility of the source country. However, Singapore will continue to play its part to ensure that sand is extracted in a legal and environmentally responsible manner,” noted a statement by the Ministry of National Development. “We have not received any official notice on the ban of sand exports from Cambodia.”