The damages caused by Singapore’s insatiable thirst for land 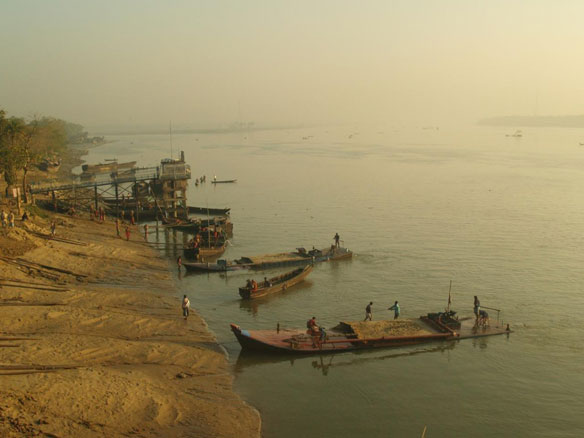 While logging and deforestation has gained global attention the growing sand mining sector is being largely ignored. Fuelled by Singapore’s land and construction demands it is wreaking environmental destruction across south-east Asia

The fast growing market for sand in south-east Asia, particularly from Singapore, is being linked to widespread damage to coastal ecosystems and fish stocks.

The densely populated state of Singapore has expanded in size by more than 20 per cent since the 1960s by reclaiming vast amounts of land from the sea, in doing so becoming the world’s biggest importer of sand – 14.2 million tonnes in 2008.

Most of its exports have come from neighbouring Indonesia, Malaysia and Vietnam but all three have now attempted to limit or ban exports of sand. With plans to expand its surface area by a further 7 per cent by 2020, Singapore is becoming increasingly reliant on another one of its neighbours, Cambodia, to meet its demand.

Although Cambodia publicly maintains that it has banned sand exports, an investigation by the NGO Global Witness has estimated that 796,000 tonnes of sand with a retail value of US$248 million are still being extracted and exported to Singapore every year from just one province, Koh Kong.

Campaigners are now worried that the rapid rise in sand mining activity in Cambodia could see the Koh Kong province in particular meet the same fate as Indonesia’s Riau Islands. Over-extraction there led to significant damage to coral reefs and entire islands disappearing, forcing the authorities to ban sand exports back in 2007.

Cambodia’s Prime Minister, Hun Sen, did announce a ban on sand exports last year but Global Witness later found this only covered river sand and not seabed sand. It claims the sector is rife with corruption and largely controlled by individuals close to the ruling elite in the country.

‘Ultimately the people who are reliant most on the natural resources will lose out: fishermen who are being evicted or seeing their stocks plummet from sand dredging boats coming through their catch area; and indigenous people,’ said Global Witness campaigner George Boden.

Having already logged much of the country’s forest resources, Global Witness accuse Cambodia’s elite, in collusion with mining companies, of switching their attention to sand.

The report says there is little evidence that any of the financial benefit from the booming sand mining trade is benefiting the country as a whole.

‘Millions of dollars are changing hands, but there is no way of tracking whether royalties, taxes and other revenues generated are reaching the national treasury…as usual, it is Cambodia’s poor who have borne the brunt of this elite capture, with loss of their livelihoods and coastal environments,’ the report says.

While the problem is being felt most critically in Cambodia, Malaysia and Indonesia, Global Witness says the majority of the blame lies with Singapore, which it accuses of ignoring concerns about the environmental impact of its sand imports as it gives the go-ahead to new racing tracks, casinos and port developments requiring yet more sand.

However, Global Witness says it has evidence that government ministries were involved in buying sand, allegedly from Cambodia.

In fact the industry has become so lucrative that as neighbouring countries implement bans to safeguard their ecosystems, there has been a growing market from Singapore for smuggled sand.

Greenpeace Indonesia says smugglers had no problem getting their exports into Singapore and were ‘rarely intercepted by customs boats or the navy’. It said 300 million cubic metres of sand was being exported illegally every year.

There have also been reports that Singapore is turning its attention to sand mining opportunities in Bangladesh, a country where erosion is already threatening its coastline.

Global Witness says the onus is now on Singapore to act: ‘The Singapore government tries to portray itself as a regional environmental leader and is hosting the World Cities Summit in June this year showcasing its environmental leadership. The reality is their demand for sand is having a hugely damaging impact on the environment in surrounding countries.

‘Its failure to mitigate the social and ecological cost of sand dredging represents hypocrisy on a grand scale,’ said Boden.

The NGO says the country should bring in guidelines for construction companies on the sustainable sourcing of raw materials.

‘Unfortunately for our coastlines and the ecosystems these sustain, the dredging industry, its consultants, shipping interests and many governmental agencies are deeply committed to this process and the profits it generates.’

However, he said dredging could be done sustainably. ‘Not all dredging is a bad thing. In its place and properly vetted for its environmental impacts (not the often questionable reports from industry backers), dredging might be a relatively safe mining practice. Today, however, too little efforts goes into insuring this.

‘Also, it seems too many of those who should know about the harm being done by it are either ignorant or remain silent,’ said Berne.