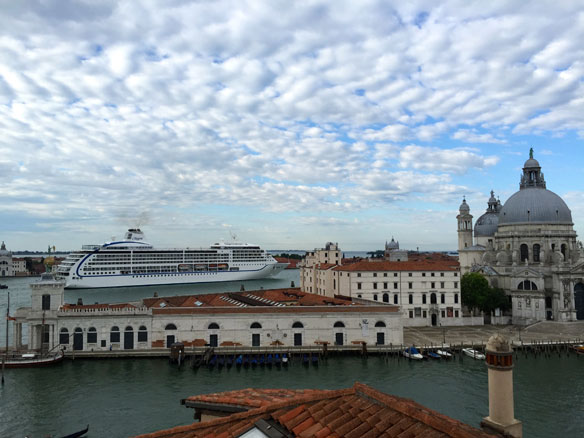 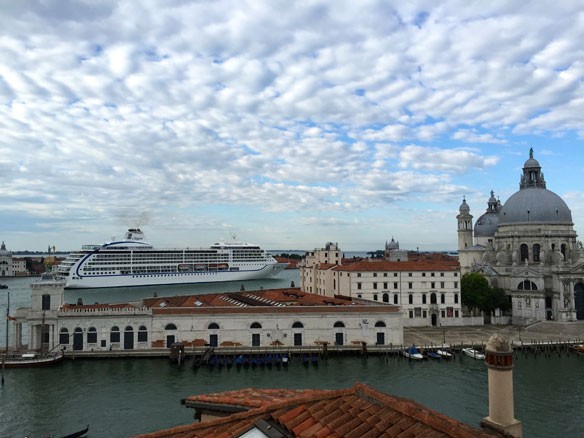 Translation:
The world acclaimed italian photographer Gianni Berengo’s artwork was about to be featured this Fall at the Palazzo Duccale in Venice. The exhibition titled “Mostri a Venezia”- Monsters in Venice, was to present 27 photographs depicting how giant-sized cruise ships have taken over the famed San Marco’s Basin, Giudecca Canal and Venice’s lagoon and body of water. The photographs were taken during a time period of two years, between 2012 and 2014.

Through his artwork series “Mostri a Venezia”, Gianni Berengo was also showcasing the arguably absurd and utterly dangerous tradition of “l’inchino” (the bow, the salute), where large cruise ships are allowed to perilously approach the coasts.

Berengo exhibit has already been presented in Milan, and was supposed to open at the Venitian Palazzo Duccale on September 18th.

The super-sized cruise ships debate is a recurrent controversy in Venice. The venetians fear they are endangering the historical and cultural city patrimony, and have negative impacts on the city fragilized marine ecosystem. Symbol of mass tourism – more than 20 millions tourists visit Venice each year- these vessels also represent a massive source of revenues, as 2 millions tourists flock each year to Venice lagoon aboard these monster cruise ships.

Ocean Giants Ban Needed on Italy Coasts: Environmentalists, AFP / Terra Daily (01-17-2012)
The 17-deck cruise ship, Costa Concordia, that capsized smack in the middle of a marine nature reserve off Tuscany shows these ocean giants threaten the coastline and should be banned, Italian environmentalists said. Italian environmental group slammed the “proven and widespread” practice of allowing cruise liners close to shore “to create a picturesque setting both on board and on land…

Big And Risky Salvage Operation: Costa Concordia Cruise Ship To Be Scrapped, CBS News (07-14-2014)
It took one act of incompetence to wreck the Costa Concordia, but it’s taken two and a half years and about $1 billion to get to the point of getting rid of the wreck. The wrecked Italian cruise ship has been successfully raised from the under-sea platform today…