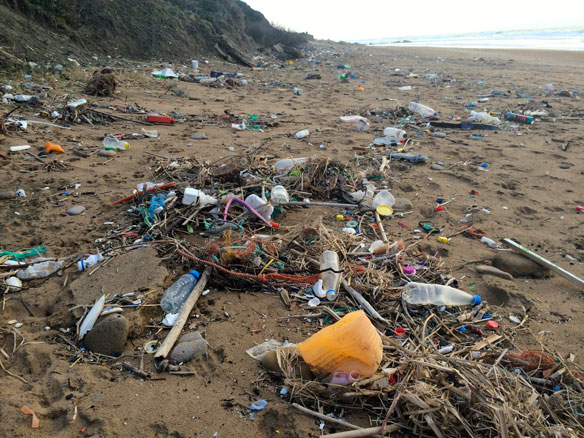 Plastic littered beach.
“When plastic ingestion occurs, it blocks the digestive tract, gets lodged in animals windpipes cutting airflow causing suffocation, or fills the stomach, resulting in malnutrition, starvation and potentially death. It is found that debris often accumulates in the animals’ gut and give a false sense of fullness, causing the animal to stop eating and slowly starve to death.” —Captions and Photograph: © SAF — Coastal Care

A new global review that set out to investigate the hazards of marine plastic pollution has warned that all seven species of marine turtles can ingest or become entangled in the discarded debris that currently litters the oceans, and nesting beaches.

Beach litter may also entangle nesting females or trap emerging hatchlings, while potentially affecting turtle nests by altering temperature and changing the permeability of the sediment on nesting beaches…