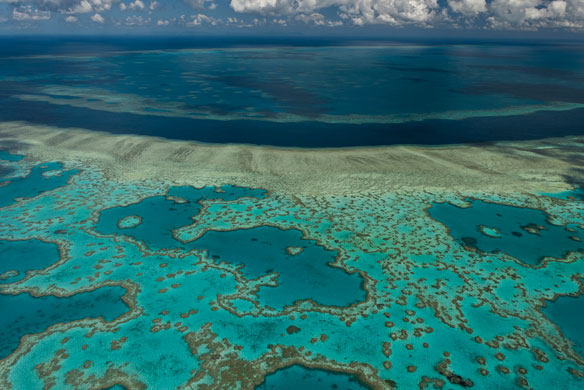 The birth place of the World’s largest living organism. The Great Barrier Reef extends for 2,000 kilometers along the northeastern coast of Australia. It is not a single reef, but a vast maze of reefs, passages, and coral cays. Photo source: ©© Greens MPs

The world-famous Australian reef is providing an effective barrier against landslide-induced tsunamis, new research shows. An underwater landslide has been found to have occurred some 20,000 years ago, causing a tsunami. Similar submarine landslides could occur without our knowledge but the Great Barrier Reef can absorb some of that potential wave energy…

Great Barrier Reef at Risk from Rushed Sediment Dumping Plan at Abbot Point, Guardian UK (12-23-2014)
A plan to dump dredged sediment onto a sensitive wetlands area beside the Great Barrier Reef near Abbot Point would lead to much more slurry being pumped into the waters of the reef than officially estimated, a report has warned…