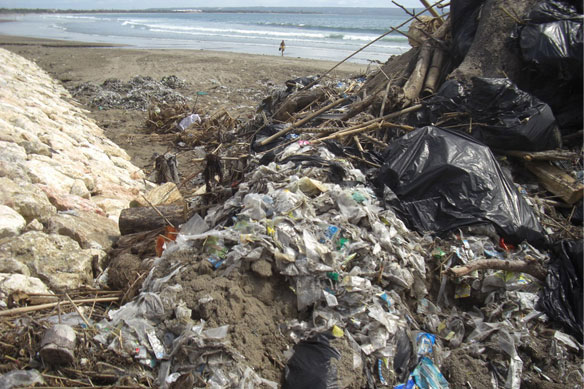 Kuta beach pollution, Bali. Photo courtesy of © Claude Graves.
“Construction cranes on beaches, damaged coral and floating trash in the turquoise waters off Bali are an unfortunate sign of just how successful the Indonesian resort island has been in attracting tourists.”The Jakarta Globe

There are more than 15 planned reclamation projects across Indonesia, including a $3 billion project to build artificial islands in the middle of Benoa Bay in Bali. This proposed reclamation of 700 hectares of water has spawned one of the largest environmental movements in Indonesia’s history…

Many are highly controversial on the grounds they could cause flooding, damage the maritime ecosystem and destroy the livelihood of local fishermen…

$3 billion islands project for Bali’s Benoa Bay has locals up in arms, The Sydney Morning Herald (02-29-2016)
A developer is proposing a $3 billion project to create artificial islands in the middle of Benoa Bay for a massive tourist destination with luxury villas and a theme park.
This proposed reclamation of 700 hectares of water has spawned one of the largest environmental movements in Indonesia’s history…

Could a Titanic Seawall Save This Quickly Sinking City? National Geographic (12-10-2015)
Jakarta, Indonesia’s fast-growing capital of 10 million people, is embarking on one of history’s biggest seawall projects—to be shaped like a Garuda, a mythical bird-like creature…