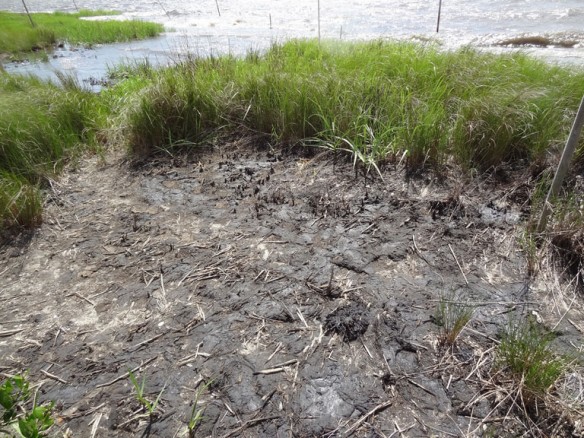 A new USGS-NASA study found widespread shoreline loss along heavily oiled areas of Louisiana’s coast after the 2010 BP Deepwater Horizon oil spill and compared the erosion from the spill with coastal changes Hurricane Isaac caused in 2012.

A pattern of dramatic, widespread shoreline loss along Louisiana’s coast caused by the 2010 BP Deepwater Horizon oil spill has been revealed by a new study by the U.S. Geological Survey and National Aeronautics and Space Administration.

Researchers used NASA’s annual mapping to analyze shoreline loss across most of upper Barataria Bay, located on the western side of the Mississippi River Delta. The study looked at shoreline imagery taken a year before the oil spill and then at images taken during a 2.5 year span after the spill. Scientists also compared shoreline losses from storm-induced erosion with losses linked to shoreline oiling.

The team found that although storm-induced erosion occurred at isolated shoreline sections, the pre-spill shoreline from 2009 to 2010 was largely stable. But, in the first year after the spill, from 2010 to 2011, the erosion pattern changed dramatically, with widespread erosion occurring throughout the bay. Erosion rates were highest along shorelines documented with heavy to moderate oiling, and were lower along shorelines that experienced low oiling.

In the second post-spill year, from 2011 to 2012, the higher loss rates extended to areas that experienced less oiling. Some of the shorelines studied received treatment to reverse or stop environmental damage from the spill, but researchers found no measurable difference in their erosion compared to non-treated shorelines.

In August 2012, 26-months after the post-spill period, Hurricane Isaac directly impacted Barataria Bay and erosion rates captured within the four-month period after the hurricane were the highest measured by the team. Researchers found this erosion was largely contained to the same isolated shoreline sections where erosion had occurred in the dominantly stable period before the spill occurred. While Hurricane Isaac did cause more severe erosion to occur at a few locations, the land loss from the oiling affected a much larger geographic area.

“Our study uniquely shows the patterns of shoreline recession seen in Barataria Bay are directly relatable to distinctly different causes,” said Amina Rangoonwala, USGS geophysicist and lead author of the study. “There was broadly dispersed erosion due to oiling from the Deepwater Horizon spill and more severe, but localized, erosion from Hurricane Isaac.”

The wetland impacts of the spill documented by the team included both shoreline erosion and wetland fragmentation, a process where small islands are broken into even smaller islands. Land lost in fragmented areas is unlikely to be reestablished because there are no new sediments flowing in to replenish what’s lost to erosion. This creates a higher possibility that natural coastal defenses against flooding will be reduced.

The images used for the study, which were collected during annual surveys and following Hurricane Isaac, were obtained from NASA’s Uninhabited Aerial Vehicle Synthetic Aperture Radar, developed and managed by NASA’s Jet Propulsion Laboratory. The system operates from a C-20A research aircraft and its polarized radar produced detailed representations of the marsh, which USGS scientists then used to develop a process to analyze the shoreline recession and its causes.

“Through this process, USGS and NASA scientists developed a repeatable, quantitative mapping method that will allow us to monitor shoreline erosion after oil spills in the future,” said study co-author Cathleen Jones of JPL.

The study, “Wetland shoreline recession in the Mississippi River Delta from petroleum oiling and cyclonic storms,” was published in Geophysical Research Letters. 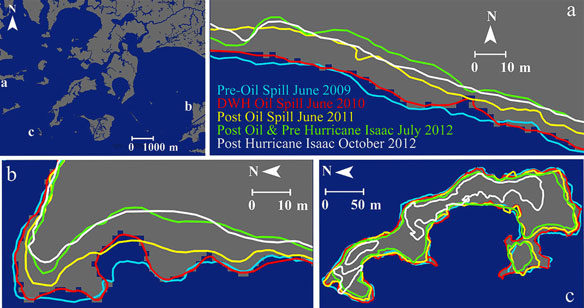 This map shows how the Deepwater Horizon oil spill and Hurricane Isaac caused island fragmentation and changes in the Louisiana shoreline between June 2009 and October 2012. Graphic by USGS.