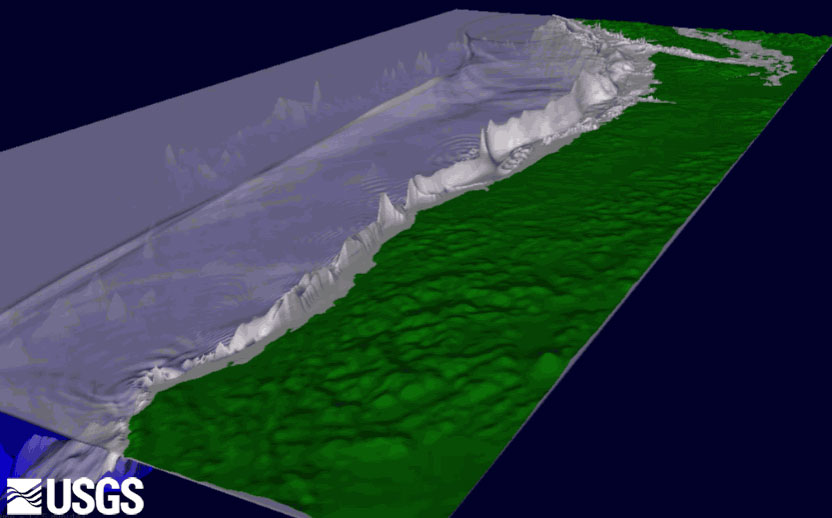 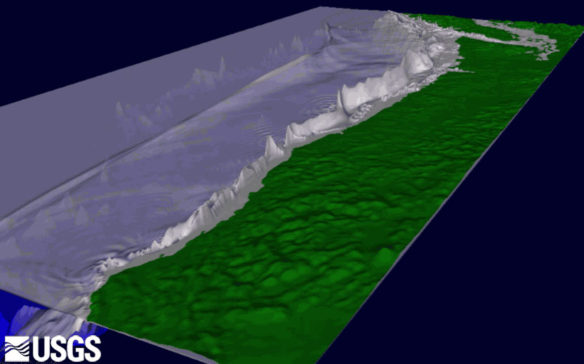 See animation of what a potential tsunami would look like generated from a large and hypothetical magnitude 9 subduction earthquake in the U.S. Pacific Northwest. The height of the tsunami waves is exaggerated compared to the land surface. Credit: Eric Geist, USGS (Public domain.)

Hours before Japan was struck by the 2011 Tōhoku earthquake and the ensuing catastrophic tsunami, John Schelling spoke at a public meeting in the coastal community of Oceans Shores, Washington, about preparing for tsunami hazards. The few dozen people attending the meeting went home that evening and watched in horror as the events in Japan unfolded.

The next time John met with the community, hundreds of people showed up. Suddenly, the theoretical hazards of tsunamis were real.

“The State of Washington realized their long, beautiful coastline on the Pacific Ocean exposed so many of their citizens to tsunami hazards, and we set out to do something about it. Emergency managers and local authorities needed a better understanding of the scope and scale of the problem as well as the vulnerability of residents and tourists,” said Schelling.

Schelling, who then managed the Earthquake and Tsunami Hazards Program for the Washington Emergency Management Division, approached U.S. Geological Survey (USGS) geographer Nathan Wood about his work on tsunami hazards. He was particularly interested in Wood’s pedestrian evacuation models that showed at-risk communities along the Pacific Northwest coast and their potential for survival.

Conventional wisdom about tsunamis says that if you feel an earthquake’s shaking, move to high ground immediately. But what if the area has no natural high ground? Many coastal communities in the Northwest are built on low-lying coastal spits of sand…

Tsunami-Vulnerable Towns Grapple With How to Save Lives, AP (10-28-2015)
Bracing for a tsunami like the one that devastated Japanese communities during a 2011 mega-earthquake, coastal communities from British Columbia to California have been grappling with how to protect people from a similar catastrophe…

The Orphan Tsunami of 1700 – Japanese Clues to a Parent Earthquake in North America, Pdf File, USGS
One winter’s night in the year 1700, a mysterious tsunami flooded fields and washed away houses in Japan. It arrived without the warning that a nearby earthquake usually provides. Samurai, merchants, and villagers recorded the event, but nearly three centuries would pass before discoveries in North America revealed the tsunami’s source.The Orphan Tsunami of 1700 tells this scientific detective story through clues from both sides of the Pacific. The evidence uncovered tells of a catastrophe, a century before Lewis and Clark, that now helps guide preparations for future earthquakes and tsunamis in the United States and Canada.